Though it’s been a long time since Betsy Brannon Mills lived in Vandalia, she still has a deep love for the community and its people, including those who lived here long before she was born.

And it is that love for her hometown that has stirred her to take on a project that remembers 20 people who have lay in rest anonymously for almost 40 years.
Mills, the daughter of the late Wayne and Muriel Brannon, is married to Ed Mills, a Vandalia native who is the son of the late Ed and Wilmeta Mills. The Millses have lived in Massachusetts since Ed was stationed there while serving in the Air Force.
But, Betsey emphasizes, "Vandalia is still my home – it will always be home."
She is a regular visitor to her hometown, and now those visits include working on a cemetery monument for the remains of 20 people buried at the east end of South Hill Cemetery.
Mills was working on her father’s genealogy when she discovered that the wife of a great uncle was buried in the Vandalia Mausoleum on the east side of the cemetery.
She contacted a grandson of that woman and learned that he didn’t know where she was reburied after that mausoleum was razed in 1976.
That caused her to find not only the final resting place of her relative, but also of the other 86 people housed in that mausoleum, whose construction was completed in 1918.
The mausoleum was built by Vandalia Mausoleum about four years after the idea of creating such a structure “as an alternative to traditional burial and cremation” surfaced.
“There was a community mausoleum movement at the time, which came out of the idea that common people should be able to be interred like rich people,” Mills said.
The mausoleum was built on an area measuring 60 feet by 45 feet and was large enough for 160 crypts.
“It was a beautiful structure, with marble floors and walls,” Mills said.
But, by the mid-1970s, Mills learned, “deteroriation and vandalism disproved the claim that the mausoleum would be ‘as near indestructible as anything that can be built.’
“It was crumbling and it was almost impossible to repair it.”
Thus, in 1976, the mausoleum was torn down.
As the razing project began, she said, an effort was made to notify family members of those interred in the mausoleum, and by the fall of 1975, most of those had been reburied elsewhere.
There were, however, 20 individuals whose remains had not been claimed, and they were buried in unmarked graves.
Mills started the process of locating the remains that were previously housed in the museum by checking with David Wodtka, the city’s cemetery sexton. Wodtka provided her with index cards indicating burial locations.
Then, she, with help from Kathy Schultz, who Mills had become associated with through the Vandalia Memories page on Facebook, went through old newspaper clippings and burial records at city hall. She also turned to local genealogist Linda Hanabarger for assistance.
“Initially, I couldn’t find anybody who knew what had happened with the bodies that were in the mausoleum,” Mills said.
“It just takes being here in town for a couple of weeks, asking the right questions and the right people,” she said.
Through her research, Mills was able to find where the remains of all but 20 people were reburied. And, then, she was able to determine who those 20 people were.
She learned that those remains were placed – in concrete vaults donated by the local monument company – in two rows in an area where the mausoleum had stood, and that those individuals included seven married couples, six single people and a young boy with his grandparents and an aunt.
Those who are buried in that area include two Civil War veterans.
“That just didn’t feel right to me,” Mills said, talking about the remains being reburied anonymously in one area.
“It wasn’t right that these people were in an unmarked grave when they had paid for perpetual care,” she said. “I get goose bumps when I think about that.
“It really bothers me that this happened, but there’s nobody at fault today, and they did the best they could.
“It’s important to remember that this occurred as the city was taking over the cemetery, in 1974. They made an effort to contact the families; they really did the best they could.”
Now, Mills wants to see that those 20 people are remembered, and she would like the community to get involved in seeing that that happens.
“I just have so much passion about this whole thing, and I hope that others feel the same way about it,” she said.
“These people had lives, they have stories and they’re in an unmarked grave … and we should honor them,” Mills said.
She has gotten an estimate of $2,750 for a 2-foot-by-4-foot monument with lettering on one side, plus $1.50 per letter for the other side. But she now believes it would be better to have a larger monument, maybe 4-foot-by-4-foot. She’d also like to see markers for the two Civil War veterans buried in that area.
“I would be perfectly willing to do this on my own, but I want it to be a community thing,” Mills said.
As a way of allowing community members to participate in the project, Mills has established a Vandalia Mausoleum Stone fund at First National Bank in Vandalia. Contributions to the fund may be dropped off or mailed to the bank. 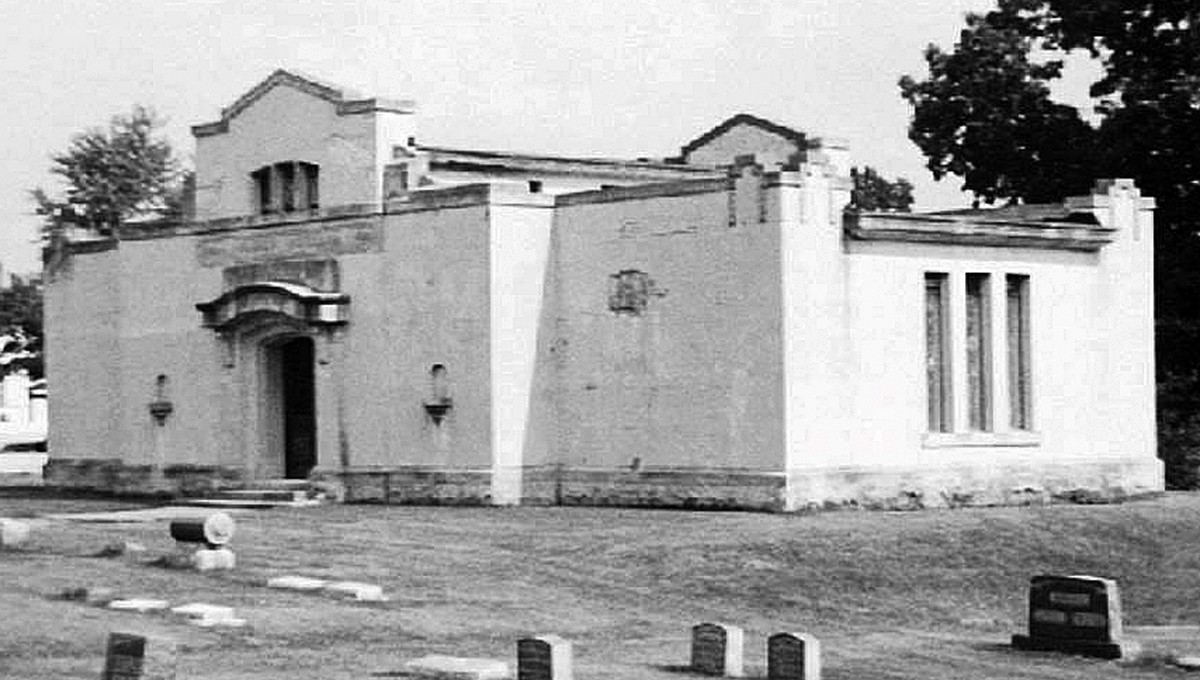 This photo, taken from the Vandalia Memories Facebook page, shows the Vandalia Mausoleum, which was built in 1918 and razed in 1976. Of the 87 bodies that were placed in crypts inside the mausoleum, 20 were buried in unmarked graves in that area of South Hill Cemetery. 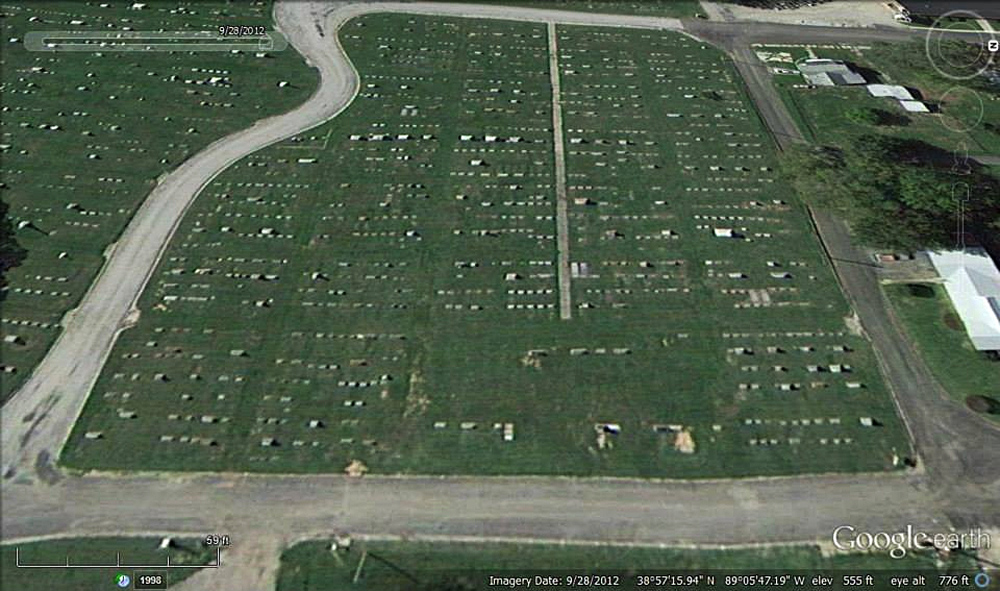 This photo, taken from Google Earth, shows the long sidewalk that led to the Vandalia Mausoleum. The 20 unmarked graves are in the area at the east end of the sidewalk.