When Benjamin Franklin Lee took his last breath on Dec. 22, 1916, the last living link that connected the infancy of Vandalia to the present matured city was broken.

Born on Dec. 15, 1817, near Auburn in Cayuga County, N.Y., the son of Lemuel and Rhoda Randall Lee, he had celebrated his 99th birthday the previous week at the home of his daughter in Shobonier.
The Lee family is considered among the earliest settlers in Vandalia. It is told in the family that Lemuel came first to St. Louis in about 1815, then returned to New York to bring his family, his mother and brothers included, to this area.
According to family legend, Lemuel sold his farm in New York, trading partly for lumber and loading a flatboat on a branch of the Allegheny River making passage to Shawneetown in Illinois.
Lemuel Lee was a veteran of the War of 1812 and his father, William, a veteran of the Revolution. After coming to the Illinois country, he settled first in Clinton County for several years before moving to Vandalia, the new capital of Illinois.
While living in Clinton County, his wife, Rhoda, died. Two of their children lived to adulthood – William Henry Lee born in November 1815 and Benjamin Franklin. Lemuel married a second time in Vandalia to Esther Webber on Jan. 1, 1822, and they were parents of at least one son, George Augustus Lee, born in 1832.
Lemuel was a trustee of Vandalia almost continuously throughout his life. Along with brother, Henry, he was given permission in 1829 by the Illinois Legislature to erect a mill on the Kaskaskia River, with the stipulation that they operate it for 20 years. This was the first water power and grist mill in Illinois. The mill was located near the current railroad trestle on the Kaskaskia.
In 1823, with his cousin, Harvey Lee, Lemuel built a treadmill operated by oxen near the spring in South Hill Cemetery. Lemuel is credited with building the first corduroy road across the Okaw Bottoms, and in 1834, he and cousin, Harvey, were employed in building a grade 4 feet high for the National Road.
In addition, he is credited with building the first bridge over the Okaw River, hauling stone from John Hall’s quarry near Ramsey.
Benjamin was about 4 years old when his father moved to Vandalia and spent his youth in the village hewn from a virgin forest. His stepmother assisted in his early education, and he also attended subscription school, where the teacher was paid for each student.
Following this basic education, he enrolled in Rock Springs Seminary, located three miles west of Lebanon in St. Clair County.
He started his business career in 1833, when he engaged in hauling goods to and from St. Louis. About the year of 1837, he with brother, William, both chose to settle south of Vandalia in Kaskaskia Township. He built a two-story log cabin four miles southeast of where Shobonier was later platted and in 1866 replaced it with a frame house. He lived there until 1896, when he moved into the village.
Benjamin and Charlotte Lorain Bishop were married on Jan. 21, 1841, in Vandalia, she a daughter of Dr. Simeon and Hannah Aubrey Bishop. Charlotte’s father was the first botanic physician to locate in the county.
Their children included James Monroe Lee, who was killed at the Battle of Shiloh during the Civil War; Dr. Simeon L. Lee; Rose H. Lee Martin; Alzora E. Lee Pollock; Dr. Ortis F. Lee, Dora Lee Shipley; and Charlotte Lee Travis.
Many of our first-person Lincoln stories come from Benjamin and William Lee. At the time Lincoln was in the legislature, their father owned and operated a tavern, “The Sign of the Bell,” located on Gallatin Street directly across from the capitol.
Benjamin, or “Uncle Frank” as he was commonly known, was witness to the whipping of two men, Parks and Means, who were punished for stealing horses. He also saw George Ogle hung in 1844 for the murder of his common-law wife, stating it was nearly -40 degrees on that day.
Among his memories was the time when blacksmith Alexander Hunter, who had become a vagrant, was legally adjudged a nuisance and sold for six months by the sheriff.
Benjamin Franklin Lee, along with his wife Charlotte, is buried in a family plot in the old State Burial Ground, along with his mother-in-law, and daughter Alzora and her husband, Dr. Ostrander Pollock. 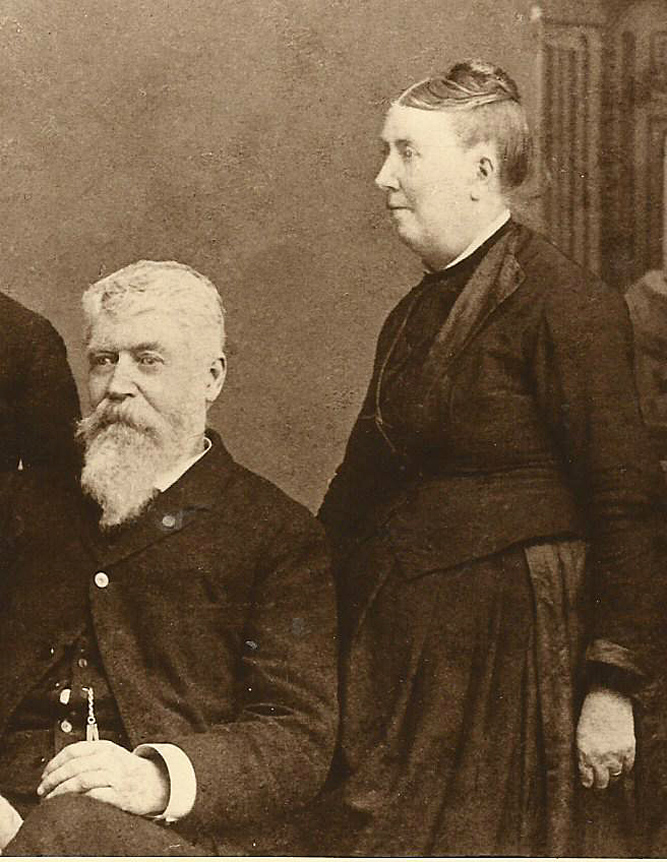