Dawson Duane Willms made his appearance one minute earlier than his brother, Cade Ryan, and they celebrated their first birthday on Feb. 27 of this year.

They are twins, but not identical, and each has his own personality, evident even before they were born. Cade was very activ, while still in the womb, while Dawson was more relaxed, hardly moving.
Cade let it be known before the estimated full-term time of birth that he was ready to make his appearance at just 31 weeks.
The brothers joined the rest of their family, which includes dad and mom Trevor and Megan Willms, and a 3-year-old sister, Brynlee Willms, whose birthday is just a week before theirs, Feb. 20.
They also were welcomed by several doting grandparents, among other kinfolk and friends.
They have a large yard to play in, a roomy house with a large living room window that lets in plenty of sunshine for them to grow in, and a good view for mom and dad to watch them when they play in the yard.
Meet Trevor Willms’ interesting and charming little family, which promises to grow even more interesting through the years as the twins and their big sister grow, not only in stature, but also in character and personalities.
The Family Willms
Megan Willms is petite in size, but strong enough to handle two 1-year-old sons and a 3-year-old daughter, maintain a neat home, keep up the laundry and work 12-hour shifts in a children’s hospital … and still enjoys her own family. That is evident in her conversation and her happy countenance as she talks about them.
“When we first learned we were going to have twins, we were very excited,” Megan said. “We knew there was a possibility we would have twins, so when we found out, we were even more excited.”
While Cade was asleep, she was holding Dawson on her lap,and talked to him from time to time.  “We were going to be triple-blessed, weren’t we?” she said to Dawson, referring to the twins and their sister.
“He (Dawson) can be very serious when he wants to be,” she said..
The Delivery
Dawson weighed 4 pounds, 4 ounces, and Cade weighed 3 pounds, 11 ounces.
Megan is small, and “that is why I could just carry them for 31 weeks,” she said.  “Actually everything was going pretty good  (with the pregnancy),” she said. “I was working 12-hour shifts at Children’s Hospital until I was 30 weeks.
“Then I started having a lot of contractions and it was putting stress on the babies, so they took me off of work. I had them on a Thursday; the Tuesday before, I had an ultrasound and they were fine. Then, all of a sudden, two days later, they decided that they wanted to come.
“By the time we got to the hospital, I was more than well into labor and they couldn’t stop it, so they sent me to Barnes. I was there about 10 hours and they delivered them by C-section,” she said. She said that she didn’t want to take a chance of one of them having a problem during delivery.
“Everyone said, when they found out I was having twins, that I was so small – that was their first concern. But I got along fine,” she said.
All three of them, mom and babies, got to come home at the same time, in 42 days. “They both got to come home at the same time which is unusual,” Megan said. “Usually one is ahead of the other.”

The Babies
“With Dawson, when I was pregnant, you would have never known I was pregnant, because he never moved at all,” she said. “He would always  have the hiccups, but that was all. He never moved.
“But my other son, Cade, he was always just moving all the time and that was actually what put me into labor, because he was moving around so much.
“On Tuesday, when I got the ultrasound,  his head was down, then when we went to the hospital on Thursday, he had completely flipped  all the way around, and was lying across the top.
Their personalities are different, as they were in the womb. “Dawson likes to cuddle,” Megan said, “while Cade does not like to be cuddled and does not like to be confined, which was probably what was going on inside  my womb. ]He just didn’t want to be confined in there.”
Dawson resembles his sister, Brynlee, with dark hair and brown eyes. Cade has lighter hair and a fair complexion.
The boys celebrated their first birthday with a Ninja Turtle party.
It is going to be interesting to watch the Willms’ children grow, but there is no doubt that Trevor and Megan, and the grandparents, will cope and enjoy the journey.
Grandparents are Don and Ellen Willms, the late Bernie and Jean Schwartz; Toni and Jimmy Dugan. David and Ruth Dugan, Bonnie Maples and Elmo Linton.
“I have them on a good schedule,” Megan said. “I put them down to sleep at 8 every night and they sleep tight through; they have since they were 3 months old. They are right on track, where they are supposed to be at (development-wise).
Dawson loves to eat everything. Cade is pretty picky, but he loves peas and would eat them all day, according to his mother.
“They play with one another a lot and they love playing with their sister, and she loves them,” Megan said.
“Everyone says, ‘You must have your hands full.’” Megan answers, “My heart is full, too.”
She is small in stature, but very wise and practical beyond her years, and has the heart of a loving mother. They have loving parents and everything a child needs to grow on. 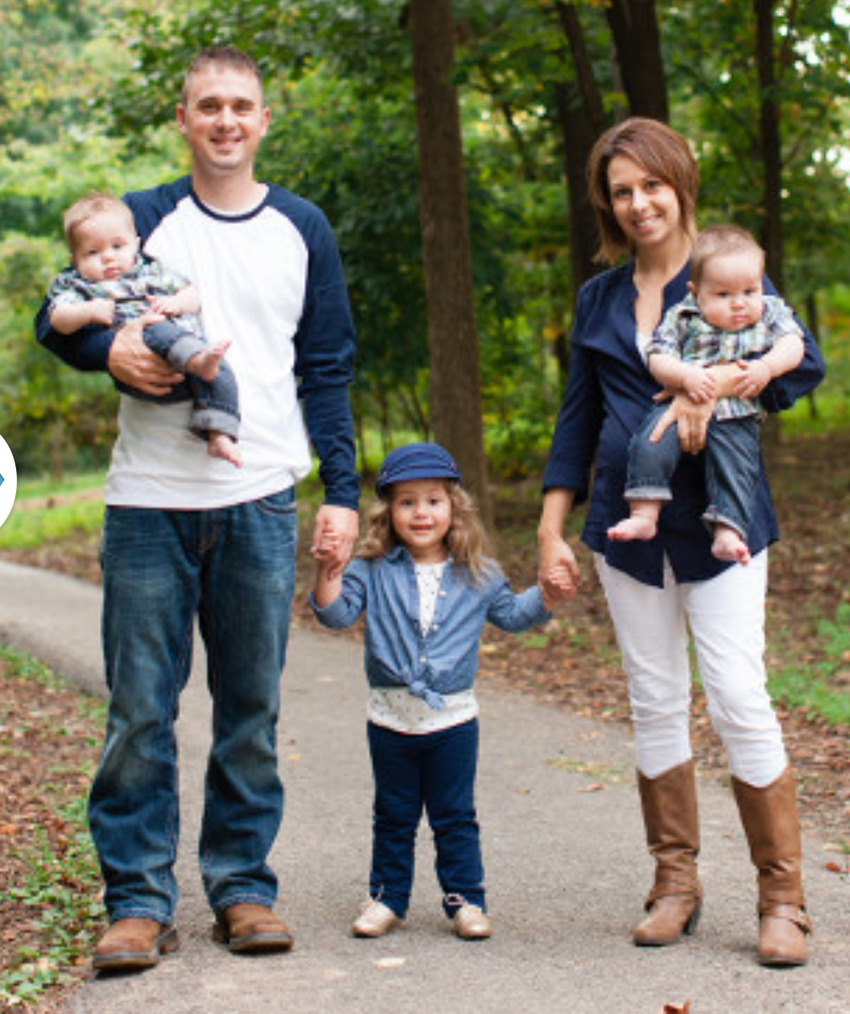