Two weeks after losing to Staunton on a three-pointer with less than 10 seconds left in the game, the Vandals exacted their revenge on Monday night.

In doing so, Vandalia advanced to a second-round game of the Vandalia Sectional Tournament against rival and No. 1 regional seed Greenville.
After getting off to a slow start, the Vandals rebounded to take the lead in the second quarter of Monday’s regional contest, then held on for their seventh victory of the season.
After the Vandals fell behind 4-0 at the start of the game, coach Brian Buscher called a timeout. When they fell behind 8-0, “I was getting ready to call another one.
“But we got it going a little bit.”
Richie Well’s three-pointer with 3:18 left put the Vandals within one at 10-9, then Collin Nestleroad added a couple of free throws to give the Vandals a one-point lead.
Staunton scored twice to lead 14-11 at the end of the opening quarter, but Vandalia rebounded on the strength of two three-pointers by Well and one by Austin Durbin to take a 24-21 lead into halftime.
Drake Dokey scored seven of his nine points in the third quarter to give the Vandals a 17-11 edge in that stanza and a 41-32 lead going into the fourth quarter.
Staunton staged a comeback in the fourth quarter, outscoring Vandalia 22-19, but it wasn’t enough to offset the balanced scoring – including seven points by freshman Nathan Casey – that preserved the Vandals’ win.
The Vandals start on Monday night was something that he had seen in recent games – a lack of intensity at the start.
“It had nothing to do with what we were in, what we were playing,” Buscher said about falling behind quickly in the regional contest.
“It was just our mental focus – we were just going through the motions,” he said.
During the timeout, Buscher reminded his squad of their game plan.
“We knew we needed to get the game going, up and down (the court). The pace of game helps them.
“We’d push the ball in transition, but then we’d slow down. Anytime we slow down and play a different speed, we’re not very effective,” Buscher said.
“I just wanted them to pick it up a little bit and start attacking.
“In the second quarter, Collin (Nestleroad) attacked the gap, dumped it down to Nathan, and Nathan layed it in.
“From then on, we kept being aggressive,” he said.
A film session over the weekend showed the Vandals that they could have beaten Staunton a couple of weeks ago, and what they had to do this time.
“That helped the kids more than our game plan.
"Our game plan didn’t change,” Buscher said.
Watching the film from the Staunton loss, he said, “helped them understand to really attack the basket on the drive and match their intensity, that we need all five of us to be boxing out.
“We talked about how we thought that we played about 12 good minutes,” Buscher said.
“They’re shaking their heads at how they played that game,” he said.
Getting a lead by half and then holding on to it, Buscher said, changed the complexion of the game.
“They had to pressure us, and that’s not their thing,” he said.
It was another game in which the Vandals’ opponent was bigger and taller.
But their coach said they have learned that they can overcome those deficits.
“We have smart kids and they play hard,” he said. “That’s what we can be happy about tonight.”
Well scored 15 points to lead Vandalia in the regional contest, and Nestleroad added 12. The Vandals made 11 of 14 free throws on the night.
Vandalia – Nestleroad 5-8 0-0 2-2 12, Casey 3-7 0-4 3-4 9, Durbin 2-3 1-3 2-2 9, Well 2-3 3-12 2-2 15 Jones 2-3 0-0 0-0 4 DuFaux 1-1 0-0 0-2 2 Dokey 2-8 1-1 2-2 9. Totals 17-33 5-21 11-14 60. 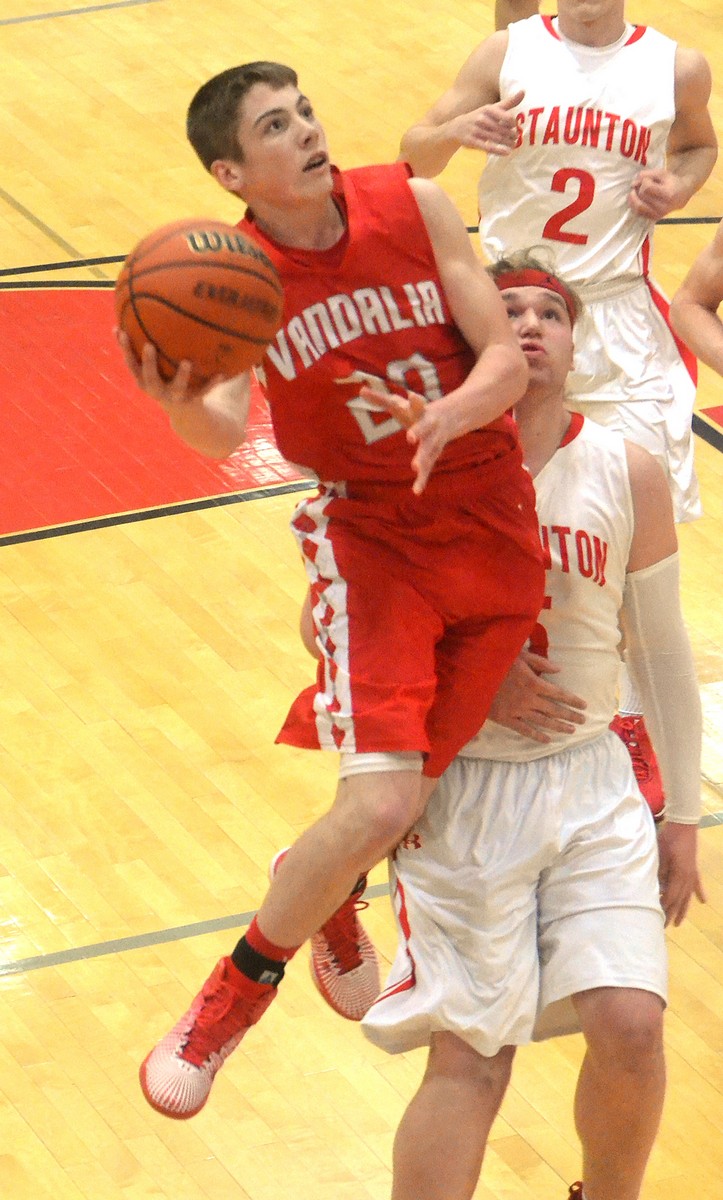 Vandalia’s Richie Well drives the lane during the first half of the Vandals regional win on Monday night. 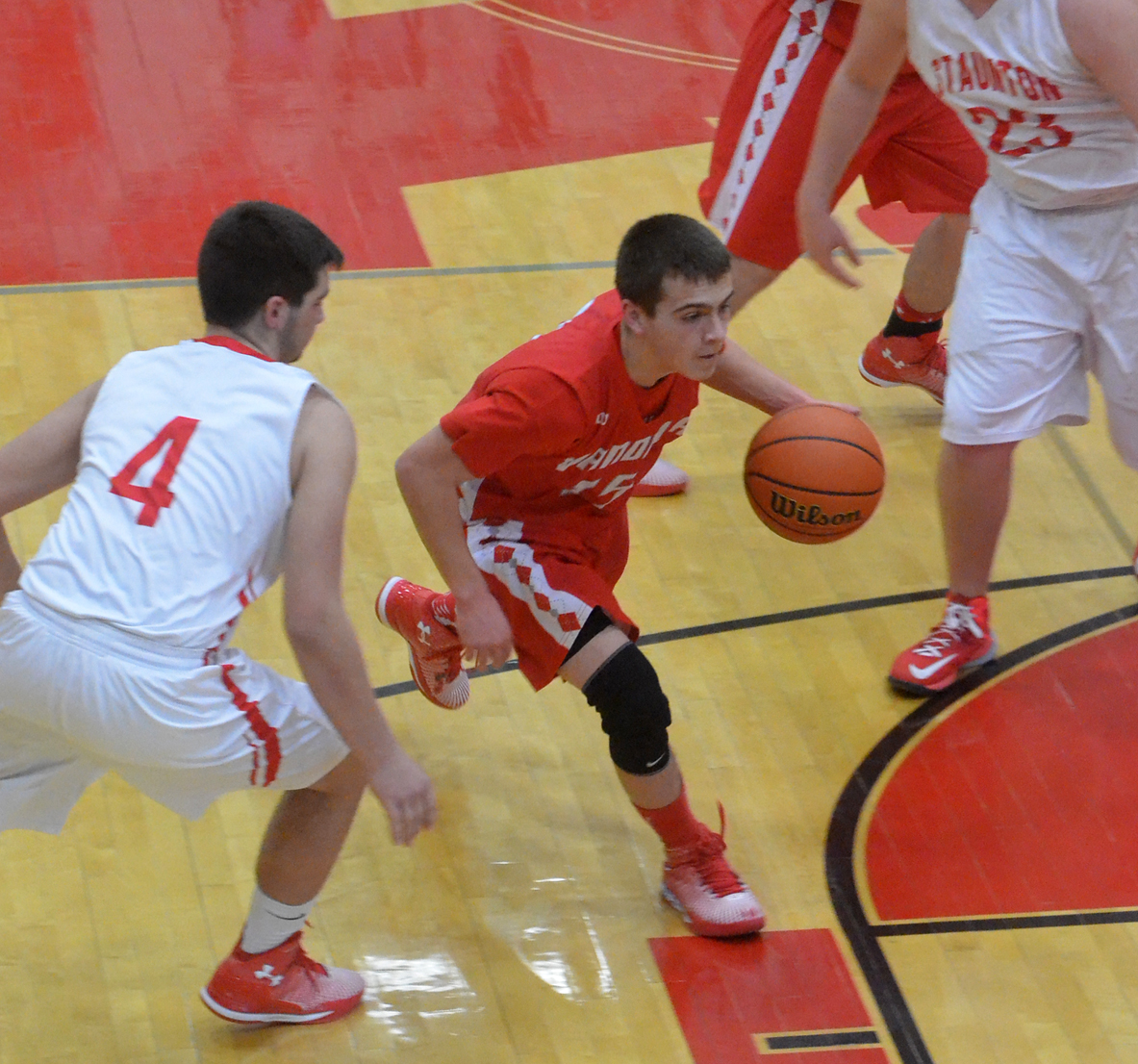 Vandalia’s Austin Durbin cuts through two Staunton defenders in the first half of the Vandals’ regional win at VCHS.