Only two years have passed since Amy and Michael Schulze bought and renovated a home on Riverview Drive in Vandalia. So, needless to say, the couple wasn’t house shopping.

And, they had decided that when they did start shopping, it would be for a home in the country.
But, that all changed when Amy went to an open house at a home that was on the market, a home that was among the nicest to be built in Vandalia’s days of infancy.
The Brosmans had spent years reviving and enhancing a home that was built in 1895 by Martin F. Houston, a local merchant and cousin of famous Texan Sam Houston. Martin Houston operated a hardware business, and was among the charter members of St. James Lutheran Church, located within a block of his home.
The Brosmans bought the home at 628 W. Gallatin St. about 25 years ago, and began researching the home’s history as part of the process to return the home to its original splendor.
Over the past quarter of a century, Bret has put in countless hours, much of it entailing climbing up and working off of scaffolding.
“It took 10 years to paint it the first time,” Bret said. “To get the paint to stick, we had to take it down to bear wood, using a heat plate to remove small sections at a time.”
Bunny said that they were able to accomplish their project only through the help of local businesses.
“The local merchants were great,” she said. “For example, auto body detailers put clear coat on the copper so it wouldn’t turn green.”
With the countless hours that they put into the building, it’s no surprise that the Brosmans are “emotionally tied to the house,” as Bret said.
But they realized that it was time to let go of it.
Bret knew that there was more work in the future, to maintain the home’s beauty. “We were starting to have to redo some things, and that’s not nearly as much fun as it was the first time.”
The Brosmans, who bought a home on Clinton Street, expected the house to be on the market for a long time.
“We thought it would take a year to sell it,” he said. “It took about a week.”
The local realty firm that Amy’s mother, Sandy Michel, works for and formerly owned, Heart and Home Realty (formerly Real Living Vandalia Real Estate), opened the home for viewing, and Amy was among those stopping by.
“I just wanted to see it,” Amy said. “I’d never been in the house, but, with my mom and dad having businesses downtown, I’d watch it change (as the Brosmans made improvements).”
“After I walked through it, I texted Michael and told him, ‘I want this house.’”
Michael was at the Statehouse Gala at the time, working for Amy’s business, The Copper Penny.
When they visited the house together, Michael agreed with Amy that they should buy the house.
Michael sees it as the couple “having another piece of Vandalia’s history,” the other piece being The Copper Penny, located near the Statehouse and on the site of a former capital building.
“This reminds me of the farm house that I grew up in. It just felt like walking into home,” Michael said.
“I really like the history of this house, and just meeting the Brosmans and to see how excited they were about this house, how could you not love it,” he said.
“We got it just the way we wanted it, and it was just like everything fell into place,” Michael said.
For Amy, it wasn’t the history of the house as much as it’s beauty.
“I’ve always loved old houses, but the thing I don’t like about a lot of old houses is that the rooms seem to be really small and non-functional.
“I walked into this house and saw the bedrooms and the living room and the dining room, and I thought, ‘This is huge.’
“The woodwork is all original, and I love the staircase in the foyer,” Amy said.
She also likes that “it’s downtown, I work downtown, and I plan to work downtown for as long as I’m able.
“I’d like to get more invested in the downtown, like my mother was, and I’m at a point in my life when I can do that,” Amy said.
In the little time that the Schulzes have been in the home, they’ve already taken advantage of some of its features, including the second-story porch that faces Gallatin Street.
“We’re looking forward to having people and watching the Halloween parade from there,” Amy said.
And that porch will get other use in the future.
“Me and some of my friends have regular porch gatherings, and we have four porches here to use,” she said. 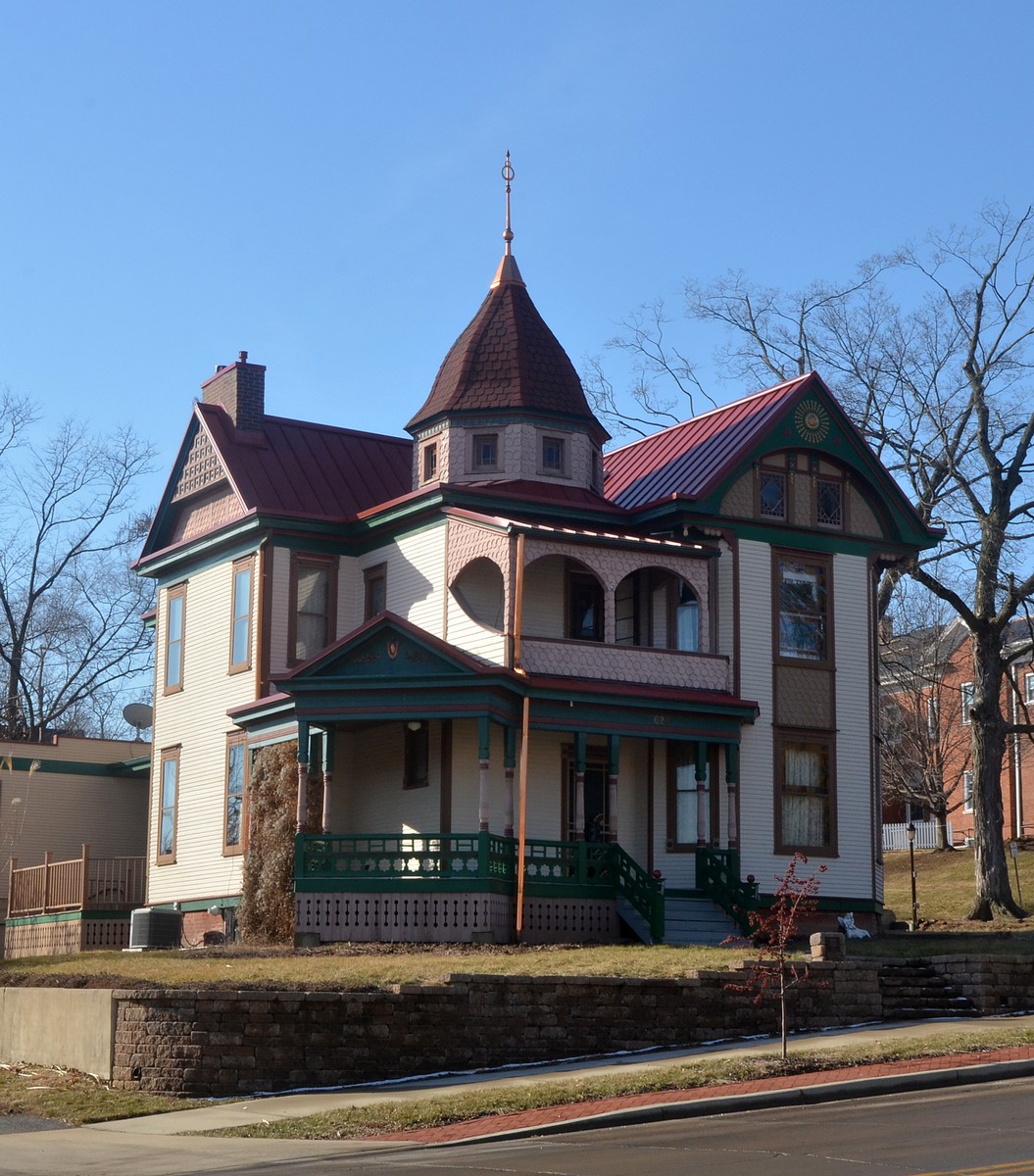 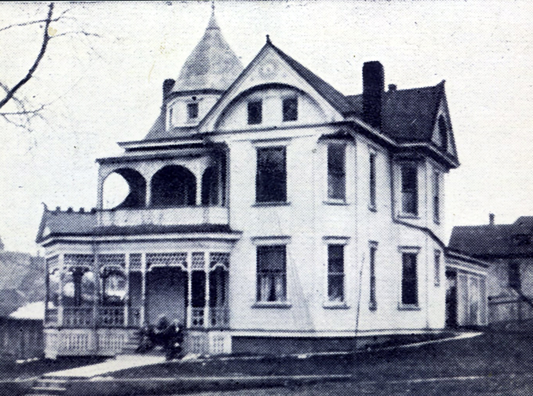 The oldest known photograph of the Houston home, which was built in 1895 by one of the early community leaders. 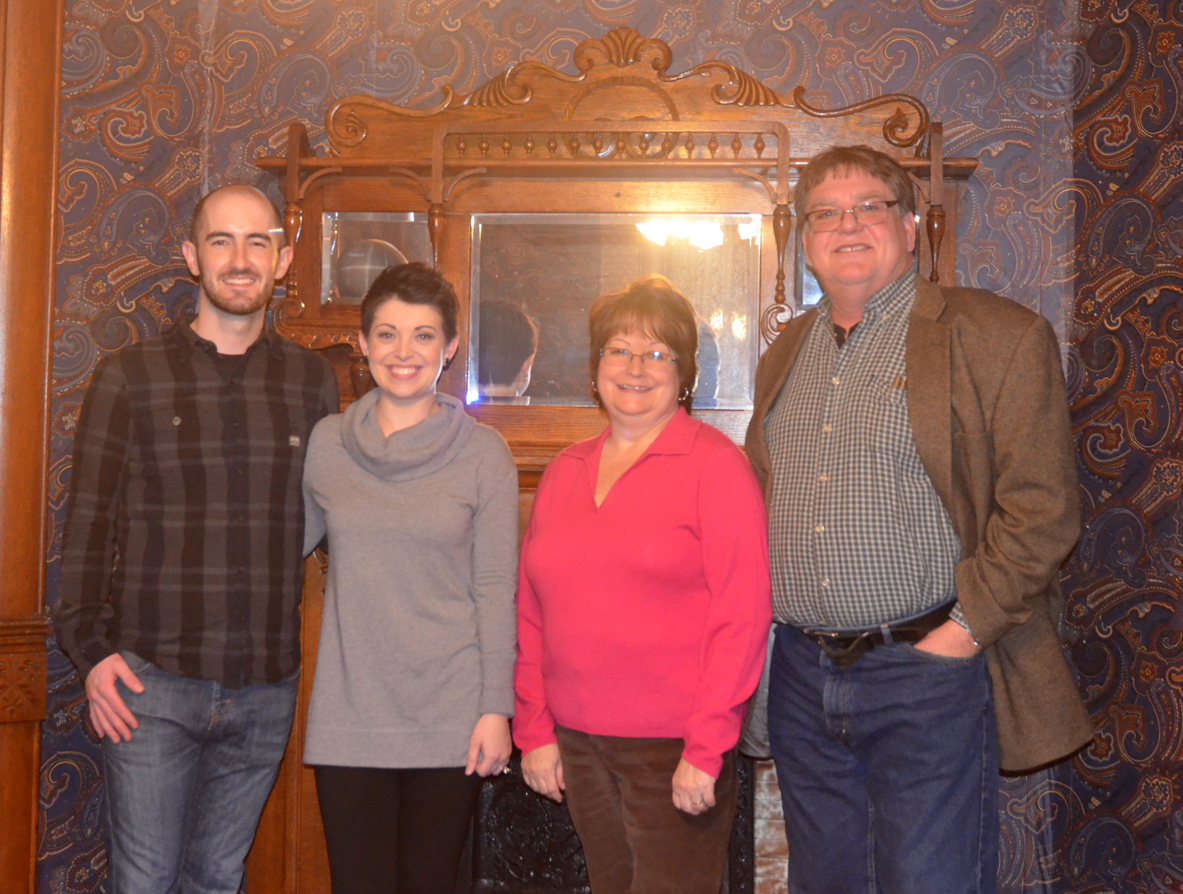 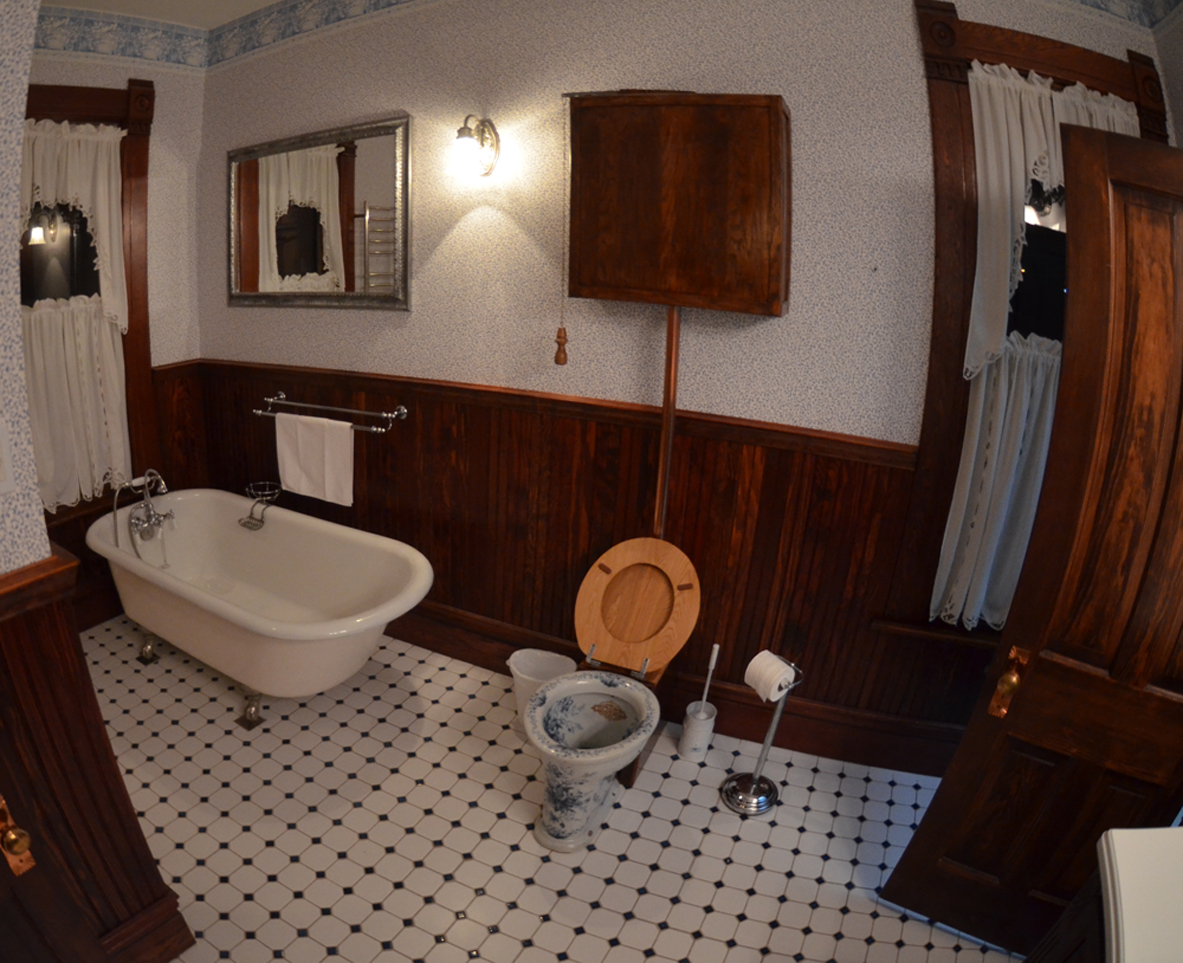 The master bath in the W.F. Houston home has the bathtub from another historical Vandalia home, The Little Brick House. 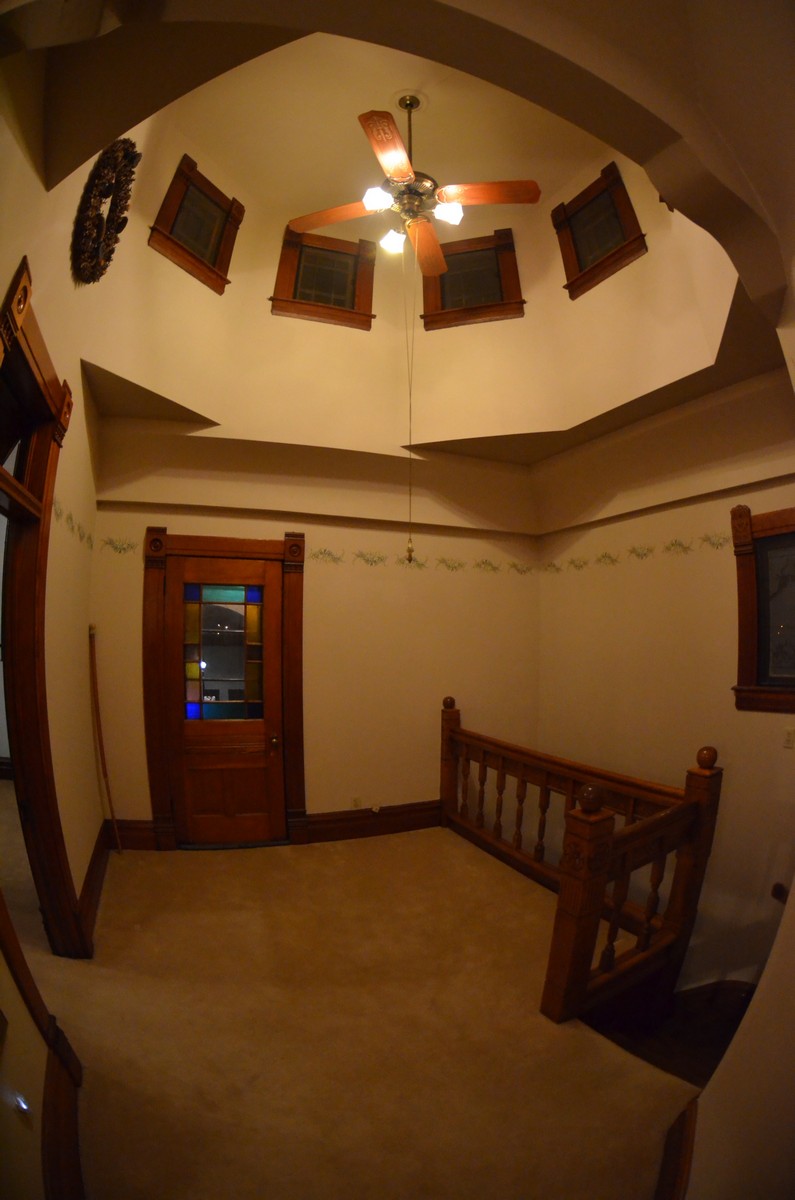 The landing on the second story of the Houston home. 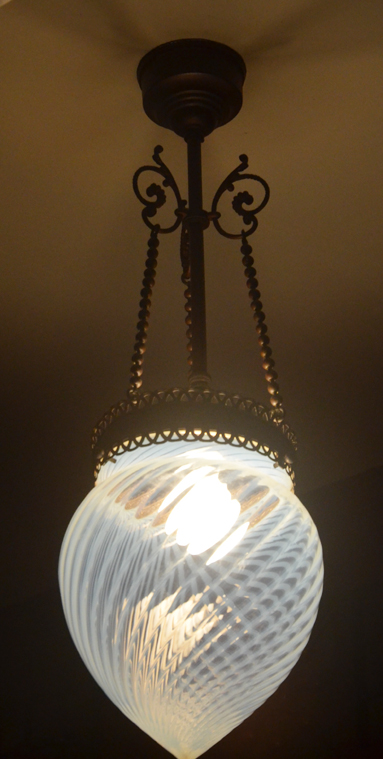 The features of the home include an original light fixture that hangs in the foyer. 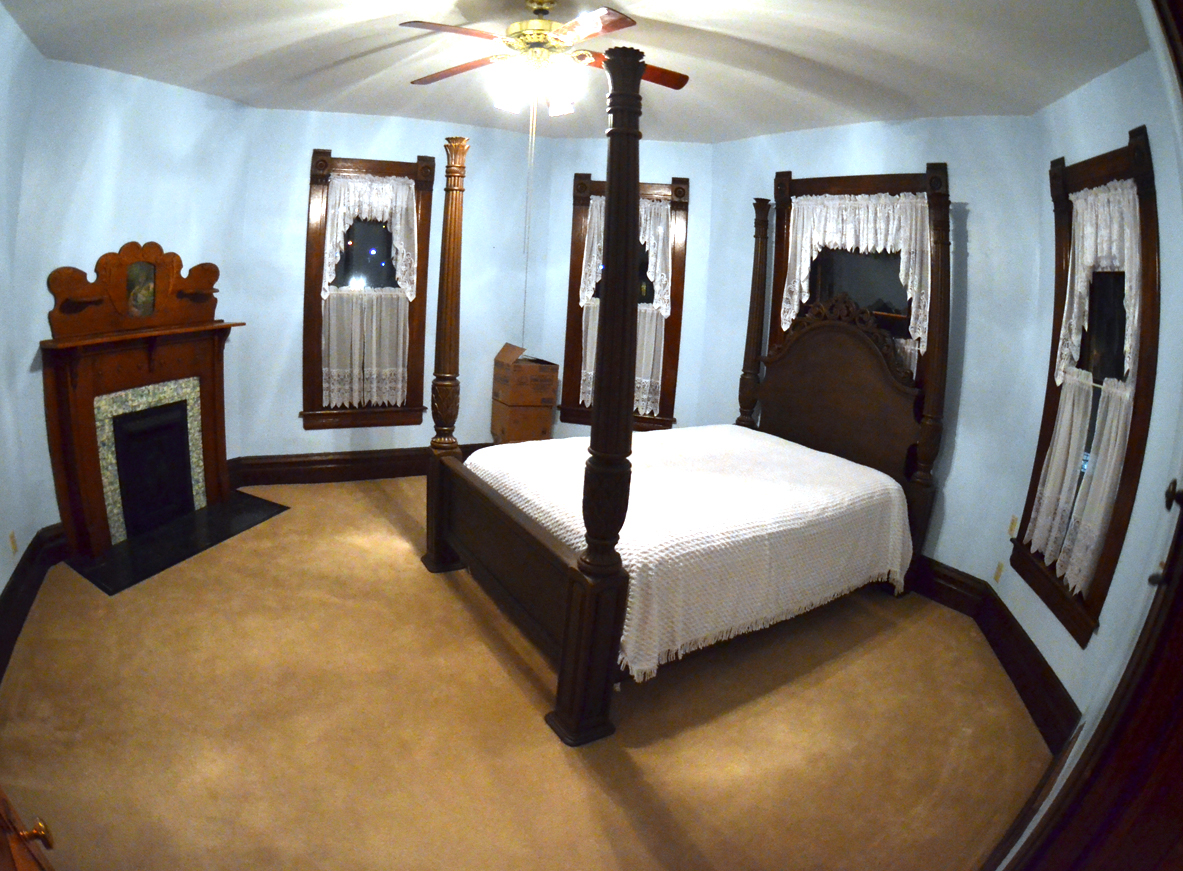 The master bedroom on the second story of the home.