Five Vandalia wrestlers advanced to the state tournament this weekend, and a sixth had his attempt thwarted by a freak injury.

Chaston Womack, Ryne Lipsey, Jake Stewart, Bobby Bradley and Kendrick Woolsey moved on to state by placing in the top four in the Vandalia Sectional over the weekend.
Dalton Blankenhip, who was looking to make his fourth trip to the state finals, defaulted in the quarterfinal round due to a rib injury. He attempted to compete in a wrestle-back match, but withdrew because of the injury early on in the first period.
Womack is making his third trip to Champaign, and Bradley and Lipsey are now two-timers.
“It was a good day, a good weekend for us,” Vandals coach Jason Clay said.
“We probably had a couple of chances at a couple of others making it, and maybe a couple of surprises,” he said. “That’s how a sectional goes.”
Womack earned a sectional title by winning all three of his sectional matches, taking the crown with a 6-4 win in the finals over Cooper Secker of Freeburg.
Lipsey placed third, losing his first match, then winning three times in wrestle-backs.
Blankenship won his first match before a rib injury essentially ended his tournament competition.
Stewart won his opening match, then fell to Colton Reed of Tolono. From there, he recorded two wrestle-back wins to take third place.
Bradley won his first two matches, then placed second, losing to Matt Baker in an 8-7 contest that was decided in the last 30 seconds.
Woolsey won his first match, then was defeated in the quarterfinals. From there, he recorded three wins before losing to Rodney Baker of Belleville Althoff in a tight 2-1 third-place matchup.
Clay was pleased with the performances of his wrestlers, particularly those who continued fighting after losing a match.
“Obviously, Chaston did a remarkable job in going through his weight class,” Clay said.
“And the others, Lipsey had to win four matches to get back through, Jake got beat in the semis and had to come back and win his wrestle-back, and Kendrick also battled back through.
“It’s great to see how those guys battled back,” Clay said, adding that he was disappointed that Blankenship didn’t get a chance to join the five advancing to state.
“I feel awful for Dalton, a three-time qualifier going into his senior year. It’s been kind of a rough year; he’s been out some, and coming back and looking super tough,” he said. “And then, just kind of a freak injury.
“It’s disappointing, because I think he’s a guy who could have done big things at state,” Clay said.
After the individual state tournament this weekend, the Vandals wrestlers get back together as a team to compete against Belleville Althoff next Tuesday when they host the team sectional competition.
The winner of that contest will advance to the team state finals in Bloomington.
A rundown on the 11 Vandals who competed at the Vandalia Sectional over the weekend follows:
• 113 pounds – Freshman Jarrett Pasley: first-round bye; lost to Joel Cook of Pittsfield, 4-3; defeated Iredis Daniels of Tolono by technical fall, 15-0; lost to Noah Mayes of Auburn, 9-5. Record stands at 37-11.
• 120 pounds – Junior Chaston Womack: first-round bye; defeated Ryan Chambers of Murphysboro, 6-3; defeated Logan Knisley of Monticello; defeated Cooper Secker of Freeburg, 6-54. Record stands at 37-10.
• 126 pounds – Junior Ryne Lipsey: first-round bye; lost to Dalton Brito of Roxana, 9-1; defeated Nick Tankersley of Benton by fall at 1:25; defeated Chandler Bowling of Harrisburg by fall at 3:36; defeated Brad Burbes of Argenta-Oreana, 9-2; defeated Arieh Hart of Murphysboro by fall in 31 seconds. Record stands at 40-8.
• 132 pounds – Junior Luke Tessman: defeated Mauricus Simmons of Murphysboro by major decision, 11-0; lost to Jarid Braunagel of Belleville Althoff by fall at 2:37; defeated Josh Brandenburg of Cumberland, 9-7; lost to Clayton Peterson of Shelbyville, 2-0. Record stands at 25-18.
• 138 pounds – Freshman Garret Stewart: lost to Terry Flute of West Frankfurt by fall at 2:51; lost to Dalyn Brach of Olney by fall at 2:44. Record stands at 8-15.
• 145 pounds – Senior Adam Palmer: first-round bye; lost to Dylan Chambers of Murphysboro; defeated Collin Smith of Olney; lost to Cody Harris of Belleville Althoff. Record stands at 20-17.
• 152 pounds – Senior Dalton Blankenship: first-round bye; defeated Trevor Barbeau of Red Bud, by fall at 3:05; defaulted by injury to Brock Barnhill of Auburn; defaulted by injury to Jamie Smith of Monticello. Record stands at 27-7.
• 160 pounds – Sophomore Kolton Kaiser: defeated Matt Darrah of Mt. Olive by fall at 2:46; lost to Adam Hudson of Shelbyville by technical fall, 17-2; lost to Tristan Overvig of Cumberland by fall at 3:44. Record stands at 12-18.
• 182 pounds – Senior Jake Stewart: first-round bye; defeated Paul Seipp of Litchfield by major decision, 9-0; lost to Colton Reed of Tolono by fall at :44; defeated Luke Curtis of Roxana, 3-0; defeated Marcus Rice of Monticello by technical fall at 5:40. Record stands at 39-6.
• 195 pounds – Junior Bobby Bradley: first-round bye; defeated Caleb Cloe of Shelbyville, 3-0; defeated Daniel King of Tolono, 5-2; lost to Matt Baker of Monticello, 8-7. Record stands at 35-7.
• 285 pounds – Junior Kendrick Woolsey: defeated Chase McDaniel of Harrisburg, 4-2; lost to Rodney Baker of Belleville Althoff; defeated Anthony Holmes of Pittsfield by fall at 2:52; defeated Owen Robinson of Roxana by major decision, 9-1; defeated Zach Herren of Auburn by fall at 1:14; lost to Baker of Belleville Althoff, 2-1. Record stands at 22-13. 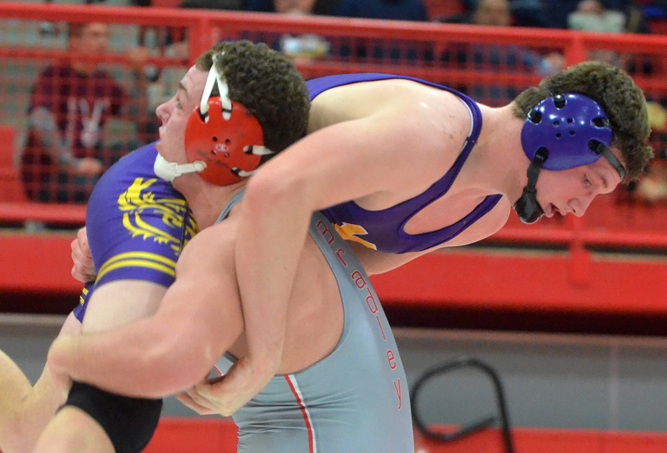 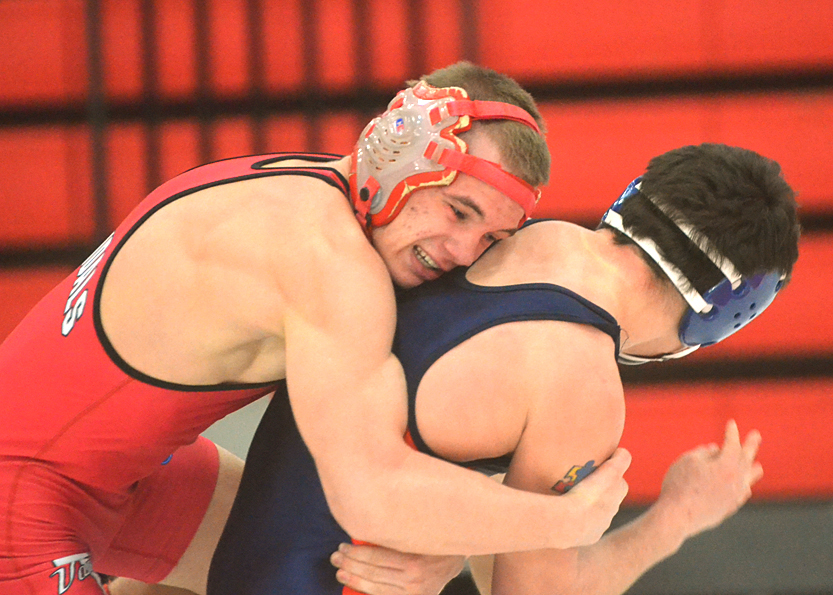 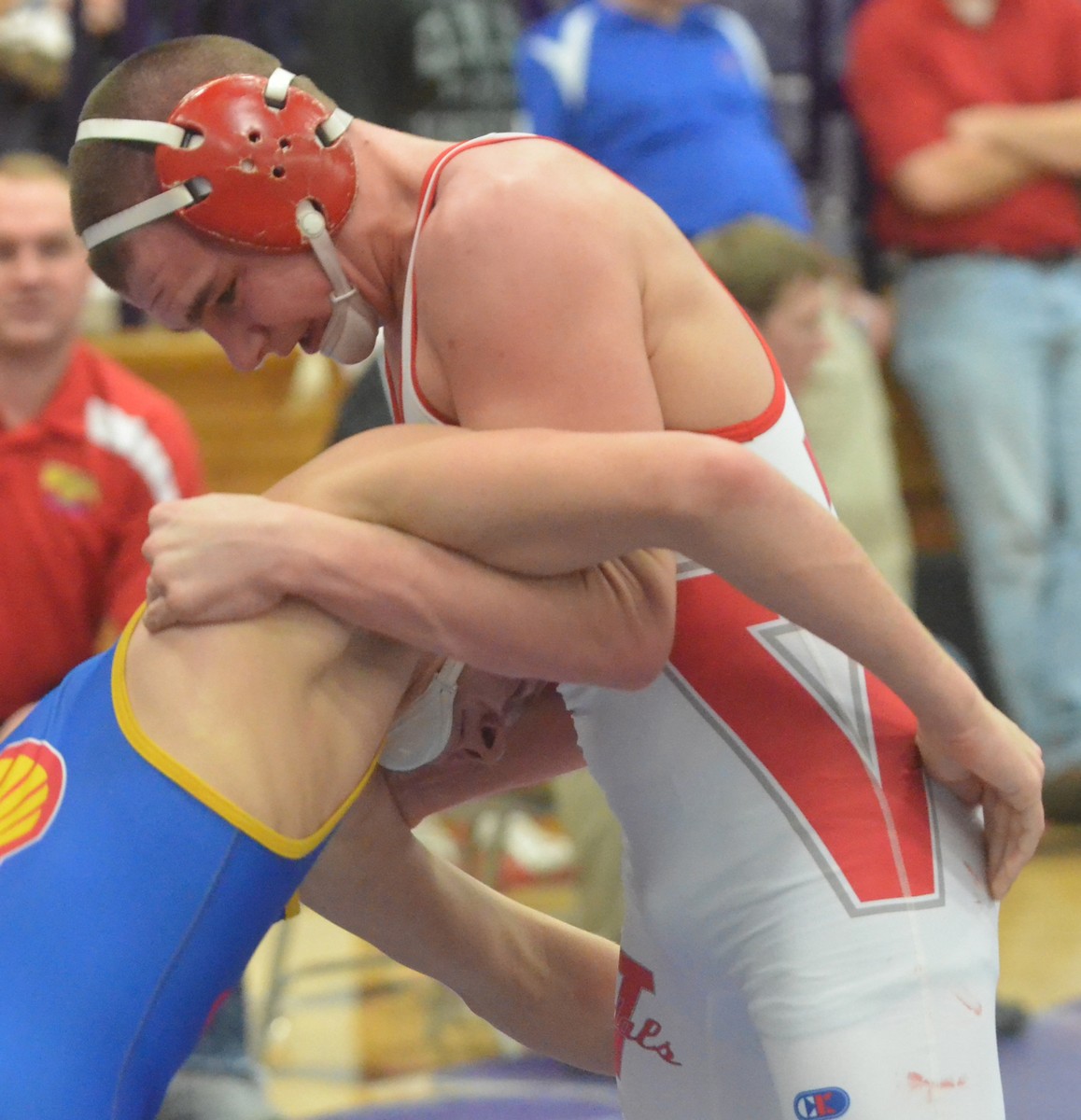 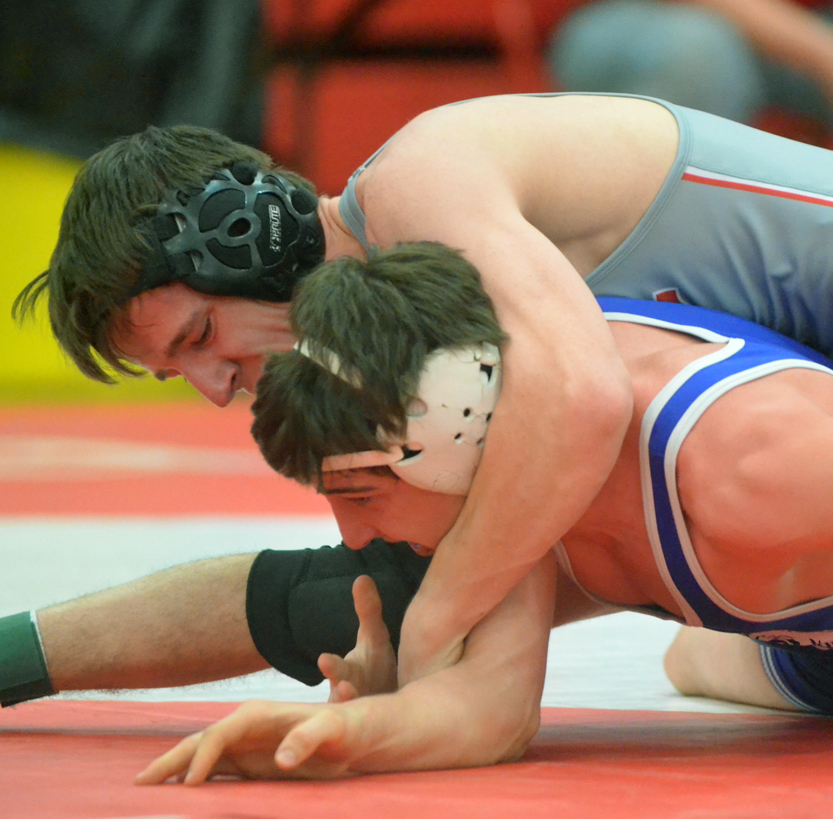 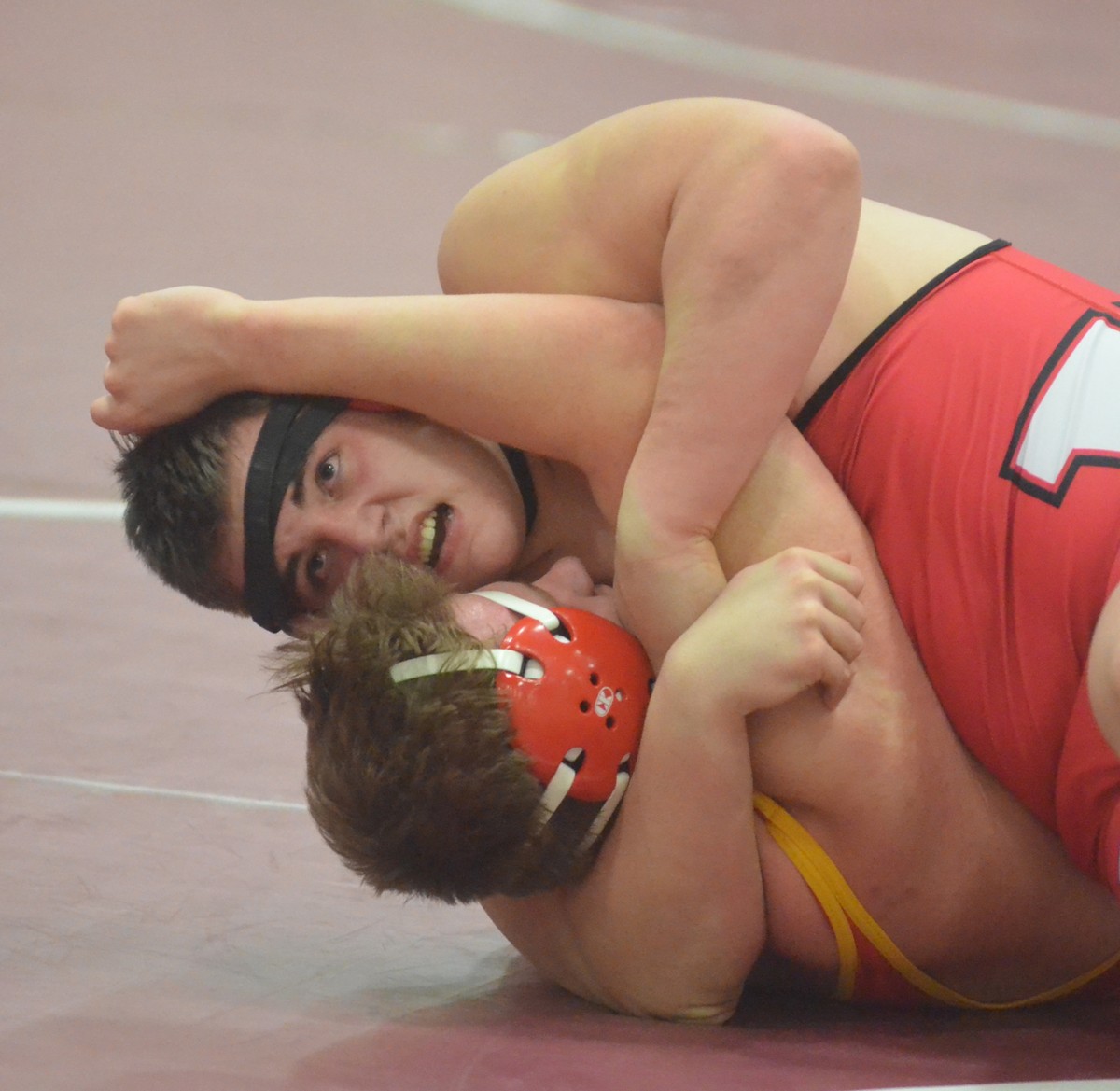 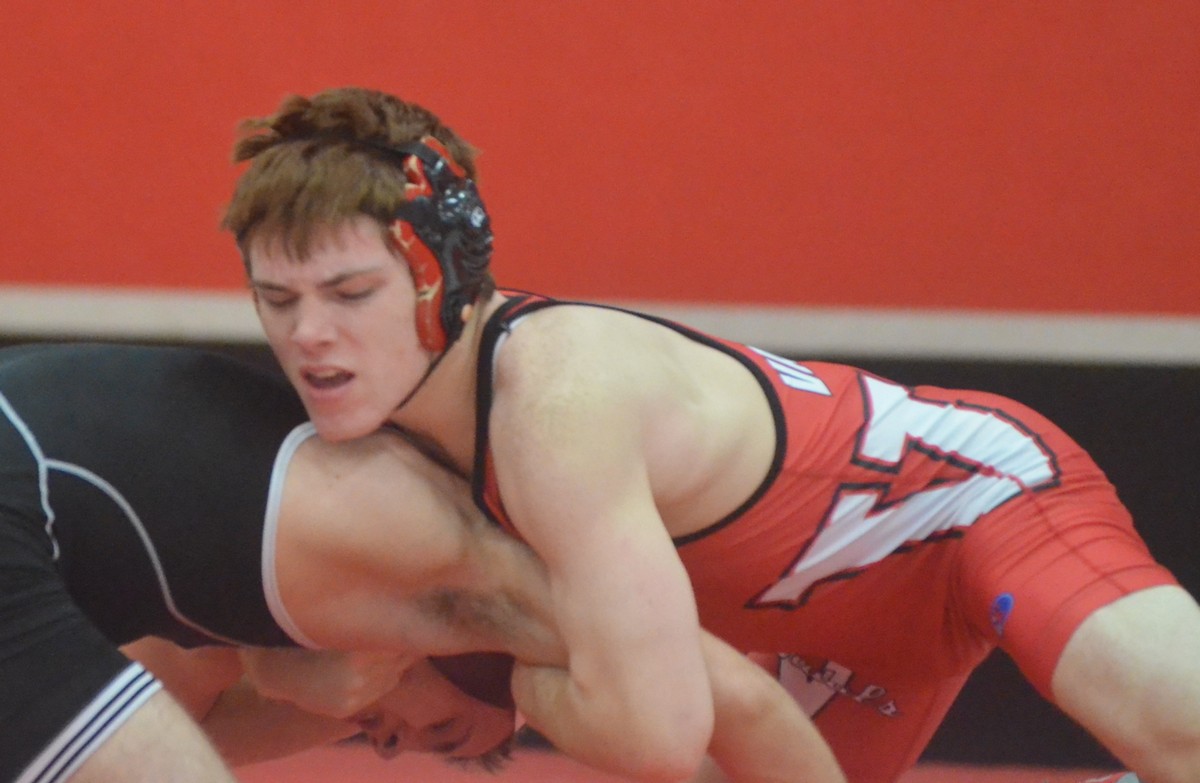