The Brownstown VFW Post 9770 is holding a supper on Saturday, from 4-7 p.m., in its new building at 520 Oak St. in Brownstown. The supper is on a donation basis (no set charge), and the proceeds will go into their building fund.

Not only is this an opportunity to enjoy a good meal while helping the veterans who have given to our country, but it is also an opportunity to see their new building, which has been a long time coming (67 years).
Post 9770 members especially want the public to see the new building, which they plan to share with the community for reunions, anniversaries and other types of gatherings.
Some old photographs show their first parade in Brownstown (on Division Street) and the Brownstown VFW Post 9770’s first Memorial Day services, which were held on the front lawn of Brownstown High School. A couple of old businesses, Dycus Oil  and McCoy’s Café, are visible in the background of that photograph.
Some of the present members and/or members of their family are identifiable in the old photos.
Following is a bit of history of VFW Post 9770, which began in 1948 in the old Brownstown  Village Hall, located on the north side of  the railroad tracks. The minutes track their efforts to find a suitable place for the meetings for 67 years.
Excerpts from the original minutes records, beginning March 25, 1948, follow:
In the Beginning
Meeting held March 25, 1948-Meeting opened at 20:30 by Commander Smail. Mr. Bond of Centralia was introduced as the Instituting Officer. Mr. Bond gave an address on the purposes and accomplishments of the VFW, after which he introduced the various members of his post that he had brought along to help him in our installations.
Among the actions was the following:
Motion was made by Comrade Griffith, seconded by Comrade Schwarm, to hold our meetings on the first and third Thursdays of the month. Meeting was to be at the School House one more meeting until we can establish a permanent place. Meeting closed 22:30.
Meeting held April 1, 1948: 19 members were present, with four officers absent. The building committee reported through Comrade Koehler, outlining the possibilities of securing the Stine Hall or the grade school gymnasium for our meeting place. Building committee was increased from three to six, making the committee read as follows: Koehler, Rush, Kimberlin, Ed Tackett, Bush, Hunter.
Other matters and motions were discussed and the meeting closed at 21:45.
Meeting held April 15, 1948.  25 members were present for this meeting and the search for a meeting place was the primary subject.
Comrade Koehler reported on the possibilities of obtaining two lots on the highway from John Stine for the sum of Three Hundred Dollars each. Comrade Rush said that the lumberyard would buy us the paint, we to pay full price, then Batles to help us out with a nice donation toward our colors. Comrade Beccue then stated that he could get the paint for us, should the lumberyard fail to do so,
The agreement of the lease with Charles E. Stine contained an agreement, as follows: The lease contained an agreement to let us have the Hall for the price of Ten Dollars a month for the next five years, the Post to fix it up in regards to paint and plaster and pay all bills which might occur. Koehler made the motion, seconded by L. Williams to pay Stine his rent before the first of the month. Motion carried.
Moving Forward
Their first efforts to secure a satisfactory meeting place included buying the previous meeting place, a house, in 1951, which they soon outgrew, both in space and efficiency for meetings.
And Still Serving
The VFW Post 9770 grew in numbers and is a valued asset not only to the Brownstown-Sefton community, but also to surrounding areas and towns.
They now have a membership on 63 and are still growing.
They are highly visible in the community and the annual Memorial Day services they hold in Brownstown are attended by many from other towns,
A Satisfactory Home …
For meetings, after 67 years, and they want to share with the community.
Soup Supper
… on Saturday, from 4-7 p.m., will be held in the new VFW building. The menu will include chicken noodle soup, chili, broccoli and cheese soup, hot dogs and chips. Donations will be appreciated, with all proceeds going toward the building fund. 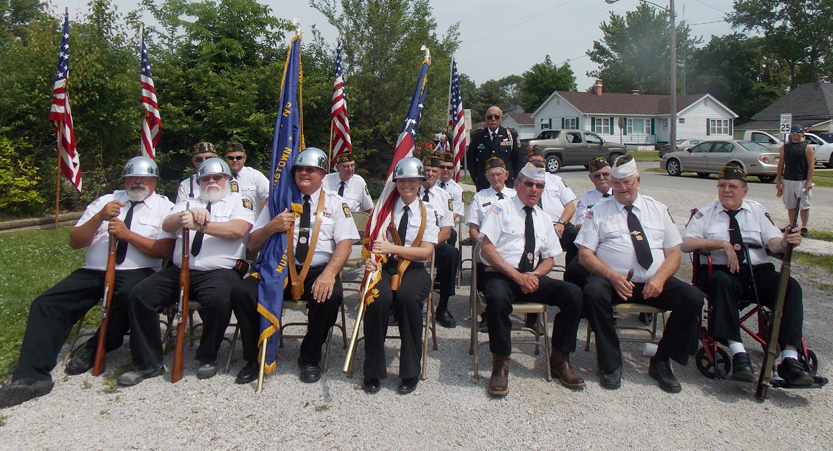