Despite having three spots in their lineup open, Vandalia’s wrestlers kept the Vandals’ regional title streak alive on Saturday.

The Vandals not only won the school’s 21st consecutive regional title, they advanced all 11 of their Saturday wrestlers to the individual sectional tournament this Friday night and Saturday at VCHS with seven first-place finishes, two seconds and two thirds.
Up by only half a point going into the finals round at Lawrenceville, the Vandals recorded eight pins to gain a 25.5-point edge, 218-192.5, over its closest competition, Olney.
Those pins were a big difference in the IHSA Regional Tournament, and it’s something that coach Jason Clay emphasized going into the postseason.
“One of the things we talked about at the beginning of the week was that getting pins was going to be big,” Clay said. “We haven’t done a super job of pinning people all year.”
The Vandals were able to secure another regional title, he said, “because we had some guys max out on points – (Jarrett) Paslay, (Chaston) Womack, (Adam) Palmer, (Dalton) Blankenship and (Bobby) Bradley, and Jake (Stewart) was half a point off.
“I knew that Olney would be our main competition and that they had a full lineup, which meant that they would have three more chances to score.
“We had the strength of seven champs, that was kind of the difference, those guys winning those final matches,” Clay said.
“I’m proud of our kids,” he said. “We won nine out of 11 in the finals, had a bunch of pins.
“That tells me that when the pressure is on, they’re going to come through.
“We’ve dealt with some adversities this year, kids getting hurt, we had some skin issues. It’s been a weird year, a stressful year,” Clay said.
“It was almost like, is this going to be the year (the streak) breaks,” he said. “Then, our kids come through, so I am very proud of them.”
Having said that, Clay said that the possibility of the streak being broken wasn't even discussed.
Instead, he said, “We talk about keeping it going and having tradition, and about all of the guys who have wrestled in our program before, back to when it started in 1995.
“I don’t think the kids look at it as pressure,” Clay said. “I think they look at as a sense of pride, that they can keep it going, and ‘We’re going to get it done, because that’s what we do.”
Team Scores
Vandalia-218
Olney-192.5
Fairfield-117
Mt. Carmel-97.5
Lawrenceville-96.5
Robinson-93.5
Carmi-37
Carlyle-25
Breese Mater Dei-21.5
Individual Results
106 pounds – No Vandalia wrestler.
113 – Jarrett Paslay: first-round bye; defeated Nick Rice of Robinson by fall, 1:23; defeated Lance Bailey of Olney by fall, 2:16. It is believed that Paslay’s win in the championship, his 39th of the season, ties the school record for number of wins by a freshman, set by Chaston Womack in 2013 and Trever Pyle in 2007.
120 – Chaston Womack: first-round bye; defeated Noah Bielecki of Olney by fall, 1:45; defeated Aaron Nettles by fall, 0:36.
126 – Ryan Lipsey: first-round bye; defeated Aaron Wood of Mt. Carmel by fall, 3:43; defeated Nathan DeMeyer of Olney, 11-6.
132 – Luke Tessman: defeated Steven Pence of Olney, 5-1; defeated Logan Johnson of Mt. Carmel, 9-6; lost to Dakota Boatner of Olney by fall, 3:01.
138 – Garret Stewart: lost to Alex Herman of Robinson, 5-3; defeated Dylan Doerr of Carlyle, 3-2; defeated Braydon Berberich of Mt. Carmel by fall, 3:25; defeated Alex Herman of Robinson by technical fall, 15-0.
145 – Adam Palmer: defeated Nick Lawrence of Mt. Carmel by fall, 0:25; defeated Duncan McDonald of Robinson by fall, 2:50; defeated Collin Smith of Olney by fall, 0:55.
152 – Dalton Blakenship: defeated Tyler Thompson of Lawrenceville by fall, 0:31; defeated Hunter Summitt of Olney by fall, 2:37; defeated Michael Hamilton of Breese Mater Dei by fall, 3:15.
160 – Kolten Kaiser: first-round bye; defeated Garrett Hayes of Robinson by fall, 1:06; lost to Tim Sturm of Olney by fall, 2:08.
170 – No Vandalia wrestler.
182 – Jake Stewart: defeated Hunter Runyon of Robinson by fall, 1:30; defeated Joe Burkett of Olney by technical fall, 16-0; defeated Branson Hall of Mt. Carmel by fall, 4:47.
195 – Bobby Bradley: first-round bye; defeated Henrik Kjaervik of Lawrenceville by fall, 5:05; defeated Malik Miller of Robinson by fall, 3:41.
220 – No Vandalia wrestler.
285 – Kendrick Woolsey: first-round bye; defeated Jacob Ludwhig of Robinson by fall, 5:21; bye in first round of loser’s bracket; defeated Trevor Corry of Carlyle by fall, 1:05. 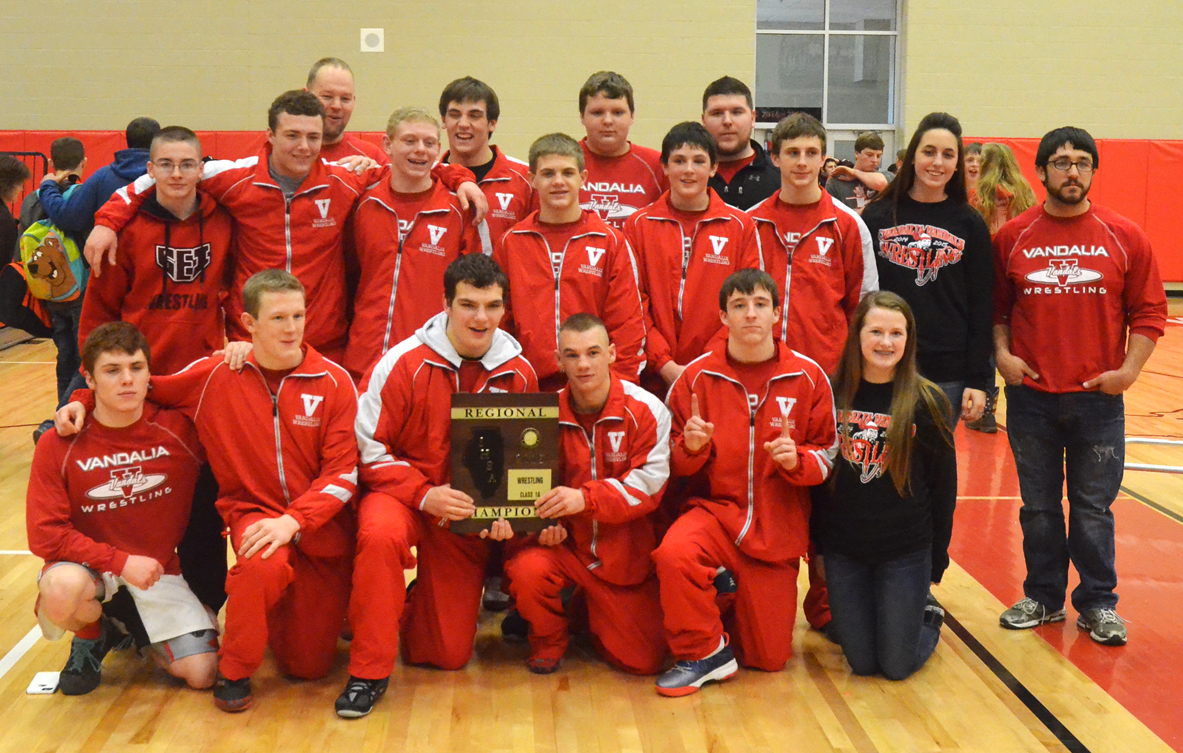 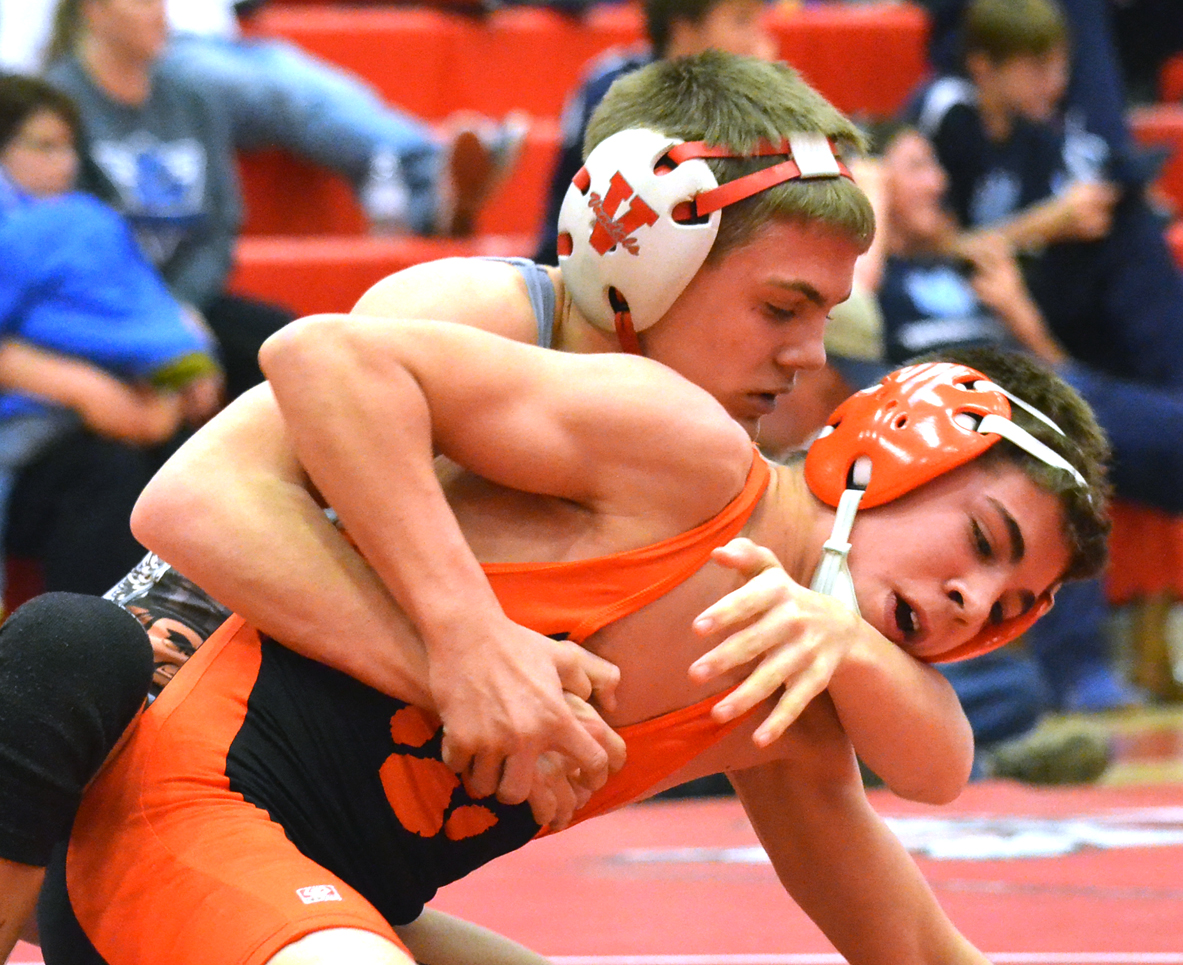 Vandals freshman Jarrett Paslay takes control over his Olney opponent, Lance Bailey, in the 113-pound class on Saturday at Lawrenceville before recording a pin, one of eight by the Vandals in the finals round. 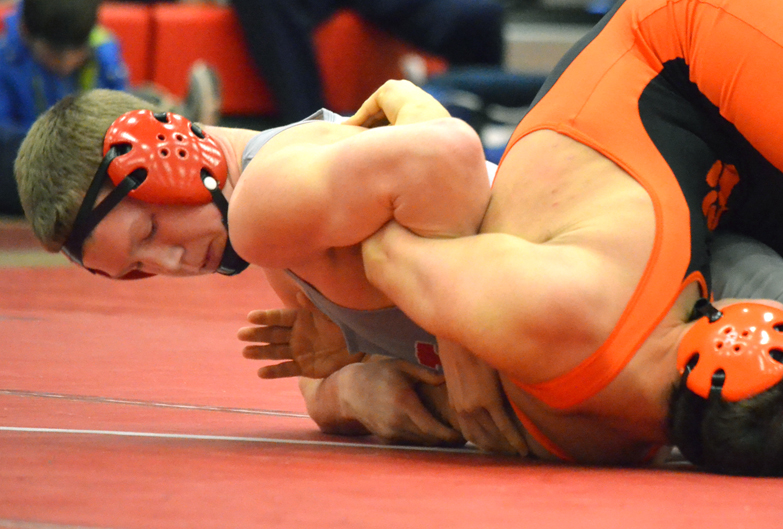