“Autumn Breeze” is the name of Rod and Sissy Rogers farm home in rural Brownstown. Although it could even be called a ranch, there are no cows, pigs or horses in sight.

Alpacas and llamas roam the pastures with their guardian, a big llama named “Sunny,” who is a friendly fellow unless his charges, the alpacas, are threatened, then he will fight predators to protect the winsome little animals who are related to the camel family, but are much smaller, cuter and appear more lovable.
Although this story focuses mainly on the alpacas,“Sunny” was the first to greet us and just about stole the show with his friendly personality, charm and tendency to kiss his human admirers if they get close enough.
The Rogers’ shared the story of how they decided to raise alpacas and the characteristics, care and feeding of  their gentle animals and the uses of their very soft and warm of their fleece.
How it Began
“Sunny was a 4-H llama,” Sissy said, “and he loves kids. The llamas are the big ones and the alpacas are the small ones, and this is a little boy named Andy.
“I saw him online. A friend of mine who got me into the business was selling him, and I just had to have him,” she said.
Sissy said that when she was left a widow on the farm with a sizeable pasture, she chose the smaller alpacas, rather than larger – and more intimidating to her –  cows.
“I was a widow at 40 out here, “ she said. “We had planned to get cattle, but I didn’t want to get run over by a cow. So I saw these listings on television, these 4-year-olds,” she said, referring to animals nearby.
“My husband loves John Wayne so, this one is named McClintock, that one is named Rooster J.  Cogburn. The other one is named Aries, and he is an appaloosa,” she said.
“Sunny loves people, and kids can walk with him and lead him,” she said.
However, Rod said, if a stranger walks up to the young ones Sunny is protecting, and Rod or Sissy isn’t with the stranger, Sunny warns you first; then, if you don’t heed his warning, he would spit on you.  Rod said the spit is very foul-smelling.
It is obvious that both Sissy and Rod are very fond of their animals. Pointing to one of the animals, Sissy said, “We were there when he was born and Rod fell in love with him, so we brought him over to our farm.”
And the Alpacas Return the Affection
In another part of the pasture, alpacas were serenely grazing. But when one of the couple’s little grandchildren entered the pasture with an older child, the alpacas walked over in a group to view the little one, much like ladies crowd around to see a new baby. They were not aggressive, just seemed interested in the little child and they just stood by quietly and looked at her.
“They are very curious,” Rod said. “We had a guy come out here (to do repair work) and he was curious about them. I asked him if he wanted to meet Sunny and  the guy picked up a handful of grass for him. Sunny was his buddy then,” Rod said.  Sunny licked the man’s face when he got close enough. They said that Sunny is like a puppy.
“We had a boy about 8 years old come out here one time and he stood out there in the pasture. Sunny laid down in front of him and the boy petted and talked to him for about an hour,” Sissy said.
“We have a girl llama that my husband bought me for Valentine’s Day, and she doesn’t like women,” Sissy said.
As several of the animals walk up, Sissy listed their names as they lined up along the fence – Dusk, Shima, Anita, Myra, Betsy, Camilla, Sunday, who was born on a Sunday morning. Along with “the girls” was a male baby llama.
Sissy said the alpacas never bite, nor are ever aggressive.
Visitors to the couple’s farm have included residents of Brookstone Estates in Vandalia.
Some Facts About the Alpacas
The Rogers said alpacas live about 20-25 years, and eat feed and oats. They have to have their hooves trimmed periodically (Sunny hates that) and the Rogers shear their fleece, yields exceptionally soft and very warm yarn for knitting sweaters, hats, etc.
Sissy had several samples of hats and scarves on display that their neighbor knitted for them. Sissy could identify whose fleece was used in each item.
Autumn Breeze Farm …
… is indeed a business, but one into which the hearts of the owners, Rod and Sissy  Rogers, are heavily invested. Such gentle, winsome and endearing creatures are the alpacas, and also their guardians – Sunny and the other llamas – who seem to show their appreciation to the Rogers by returning affection. 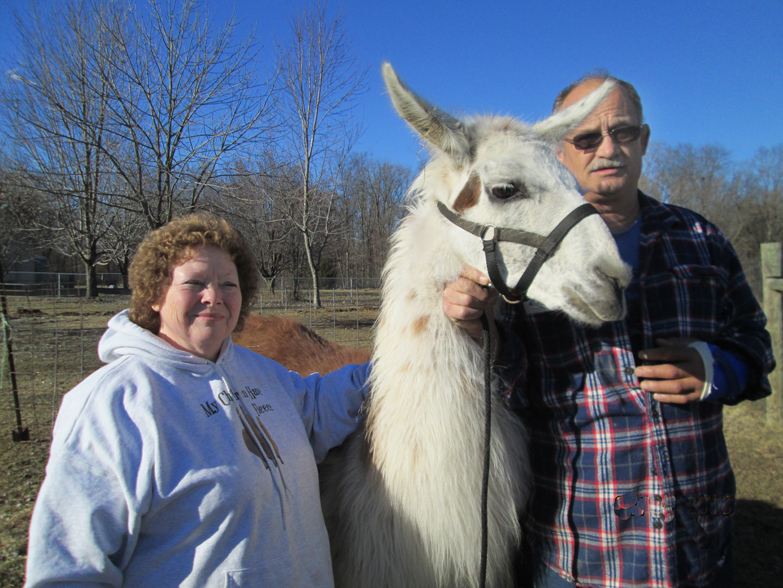 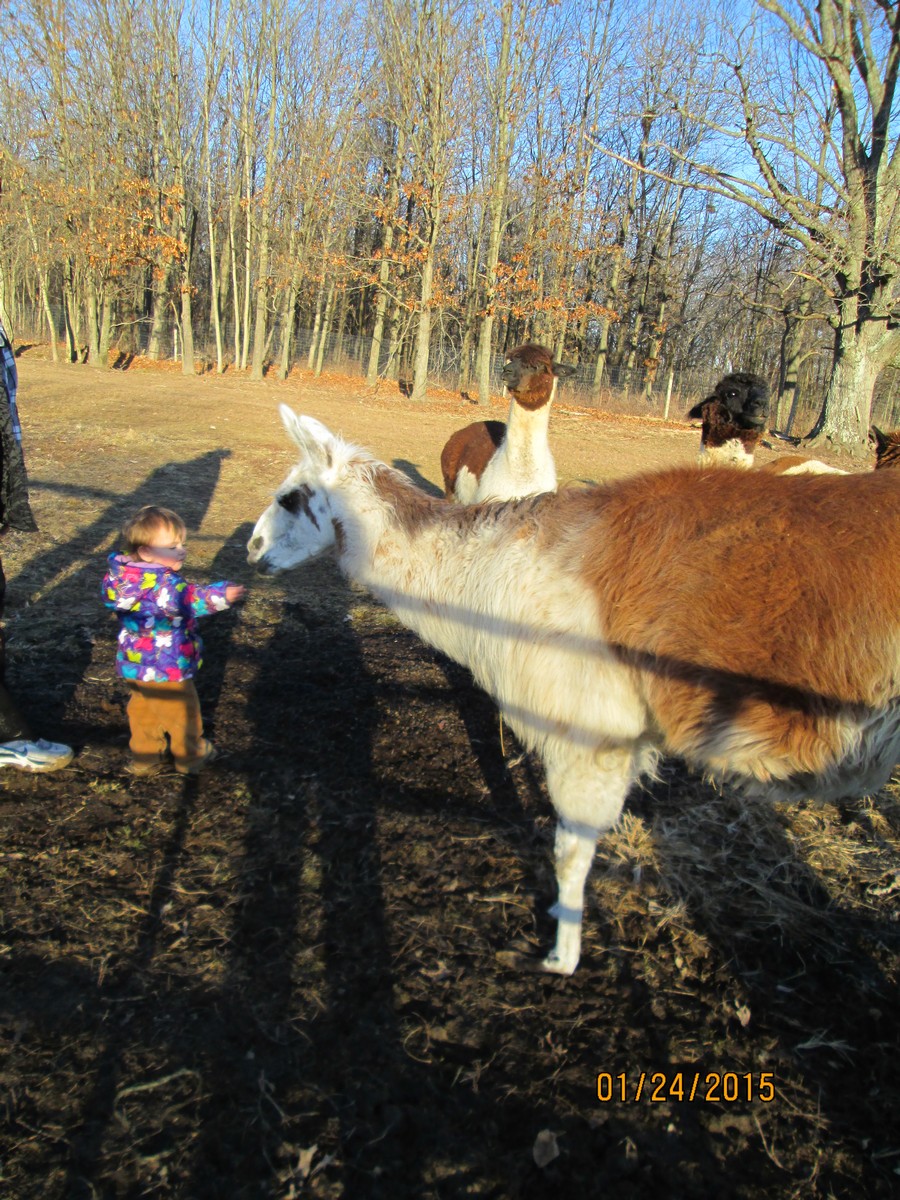 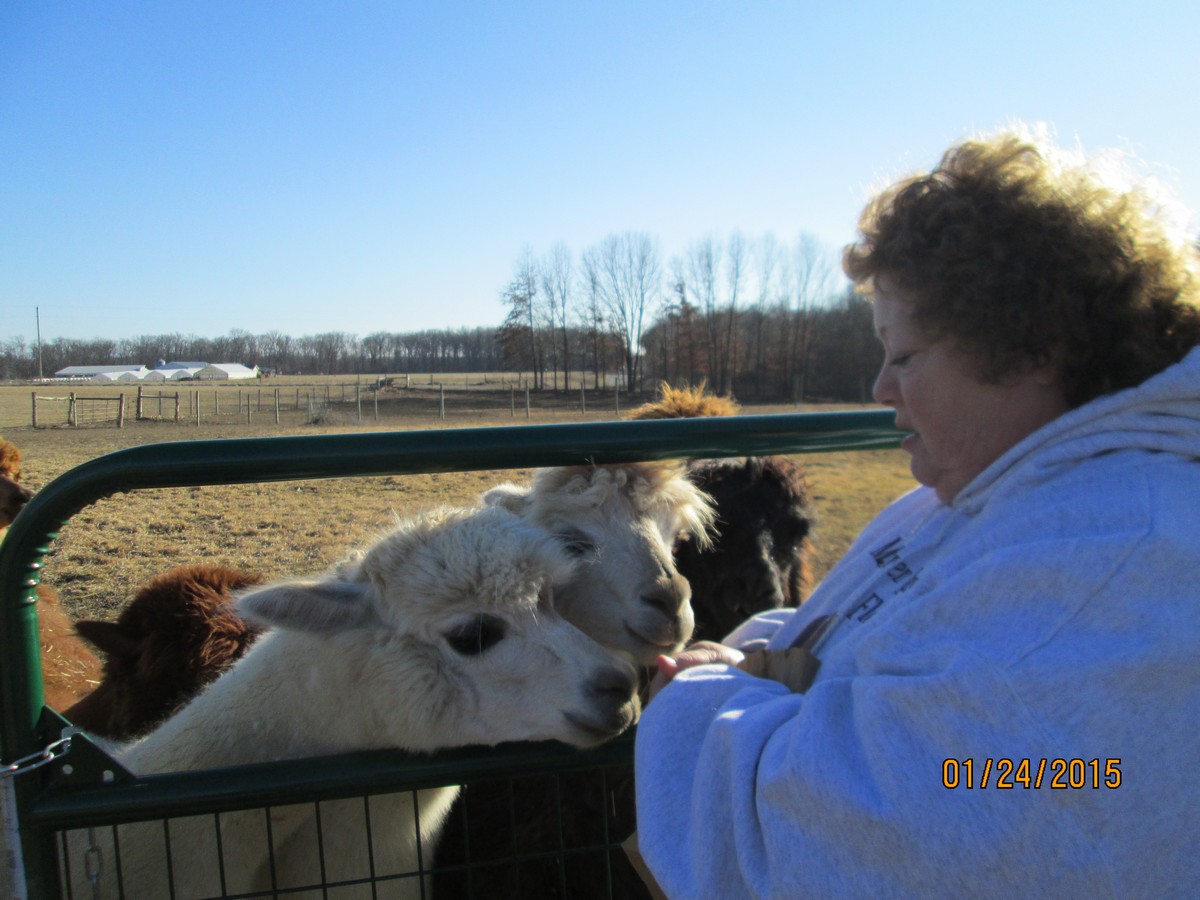