Both Carl Rhodes and Linda Hanabarger concentrate on the past as they volunteer to make the present and future better for Vandalia.

Rhodes, a Vietnam War veteran who now serves as pastor of Northside Christian Church, has focused on serving and honoring the men and women who have served in this country’s armed forces.
Hanabarger has become established as one of this area’s primary historians, giving her time to research, preserve and present to others that history.
For their service to the community, Rhodes and Hanabarger each received an Abe Award from the Vandalia Chamber of Commerce at the chamber’s annual banquet last Thursday at the Vandalia Moose Lodge.
Kelly Washburn, the 2015 chamber secretary, presented the award to Rhodes, noting that his 23 years of service in the Army includes time as a Green Beret in the Special Forces and a paratrooper with the 101st Airborne Division.
Since coming to Vandalia in September 2007, Rhodes has worked to serve and honor other veterans.
He completed the U.S. Department of Veterans Affairs Rural Clergy Training Program in order to be able to operate a Veterans Outreach Center, which he does in partnership with Gene Beckman.
Also, to ensure that the community continues to honor veterans, Rhodes began offering a Veterans Day program at his church.
His service to the community also extends beyond that given to local veterans.
He preaches to inmates at the Fayette County Jail weekly, and offers that service one Sunday each month at Fayette County Hospital Long Term Care and Brookstone Estates.
Rhodes is a member of the Vandalia Ministerial Alliance, Crawford-Hale American Legion Post 95 in Vandalia and VFW Post 9770 in Brownstown.
Rhodes was humble in accepting the award, saying that he only provides a spark for others who do good things for the community.
“You spend 23 years in the military and you do develop a heart for people,” he said.
“What I do in the community is not for awards, it’s not for recognition,” Rhodes said. “All I do is light the match and I watch the fires go – that’s what it’s all about.
“This community has a heart for reaching out to the hungry, bring hope to the hopeless and bringing love to the unlovable.”
Hanabarger received her Abe Award from state Rep. John Cavaletto (R, 107th District), who joined Vandalia Statehouse Site Superintendent Steve Riddle in nominating her for the honor.
Cavaletto has watched Hanabarger’s efforts to preserve and share the history of Vandalia and the Vandalia Statehouse while holding office hours in the old state capitol. He has also learned the importance of that building.
“The old capitol is so meaningful; we sometimes take it for granted,” he said. “I really admire the facility and what it stands for.”
Cavaletto said that for 35 years, Hanabarger has been active in education, historic preservation and genealogy.
She has been active in the Vandalia Historical Society, National Road Association of Illinois Board and Friends of the Vandalia Statehouse, the support group for the old state capitol.
Since 1992, Hanabarger has edited Fayette Facts, a quarterly publication of the Fayette County Genealogical and Historical Society, and has served as the president of that organization for the past year.
Also, Cavaletto said, Hanabarger developed, at the request of an Illinois Historic Preservation Agency representative, a cemetery walk for the Old State Burial Grounds, and has led eight performances of that walk, using local individuals to tell the stories of prominent people in the early days of Vandalia and Illinois.
“Linda’s enthusiasm and knowledge about the Vandalia Statehouse is infectious,” Cavaletto said.
“Her stories and tours while dressed in period costumes are what helped generate my affection for this important site,” he said.
“We need to keep the Statehouse in good repair and tell the stories of the important American figures who walked the halls and served the people of Illinois.”
And that, Cavaletto said, is what Hanabarger does by both serving as a volunteer at the Statehouse, allowing it to stay open when Riddle is away, and by leading the effort to raise funds for the repair of the Statehouse windows.
“Linda is a shining example of what a positive impact one person can have on a community when driven by compassion,” he said.
Hanabarger told of how she enjoys telling the stories of Vandalia and its history.
“Of the people who come in (to the Statehouse), what has struck me is that when I take them into the rooms, they say, ‘I am able to be more in touch with what happened here,’” she said.
Hanabarger said that while she has been around the Statehouse for a long time, she learned one important fact within the past year.
“That is the only place that you can walk where Lincoln did.
“The Lincoln Home has been remodeled, the Old State Capitol has been taken apart brick by brick and rebuilt, and the White House has been remodeled.
“The second floor (of the Statehouse) is the only place where you can truly walk where Lincoln walked,” Hanabarger said.
She also has learned that Cavaletto has been a true friend of the Vandalia Statehouse.
“When Rep. Cavaletto starting coming, I realized, here was somebody who cared about this building as much as we do,” Hanabarger said.
In addition to the presentation of the Abe Awards, the banquet included addresses by the outgoing president, Brock Brannon, and the 2015 president, Todd Stapleton, and the passing of the gavel from Brannon to Stapleton.
Vandalia Mayor Rick Gottman also spoke, talking about his interest in working with Stapleton and other chamber members on economic development and in other areas in the coming year.
Dr. Kevin Childers served as master of ceremonies for the banquet, and musical entertainment was provided by “Zydeco Crawdaddys.” 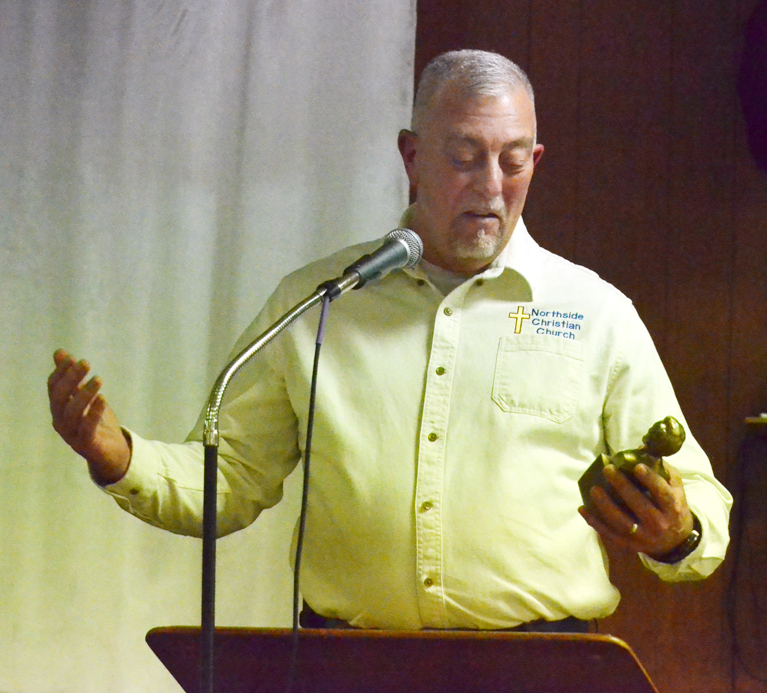 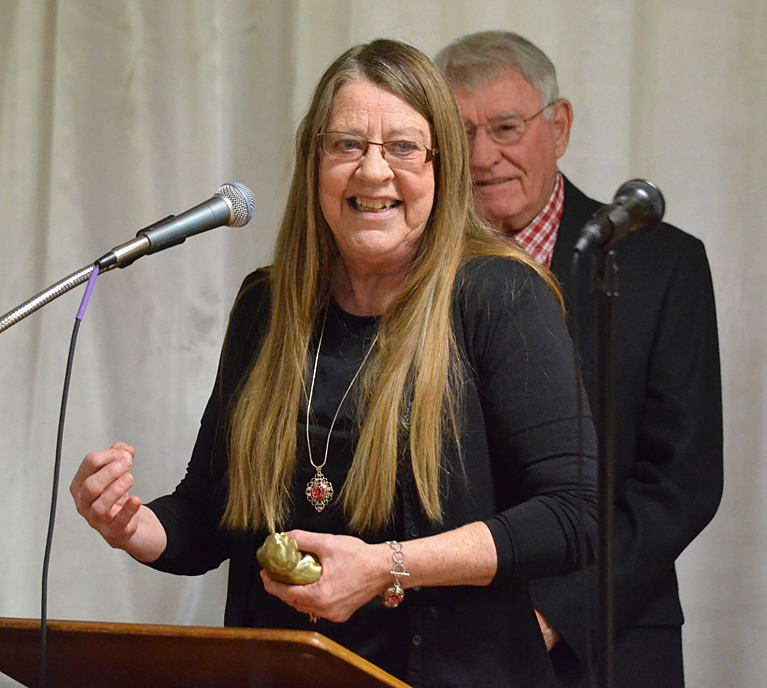 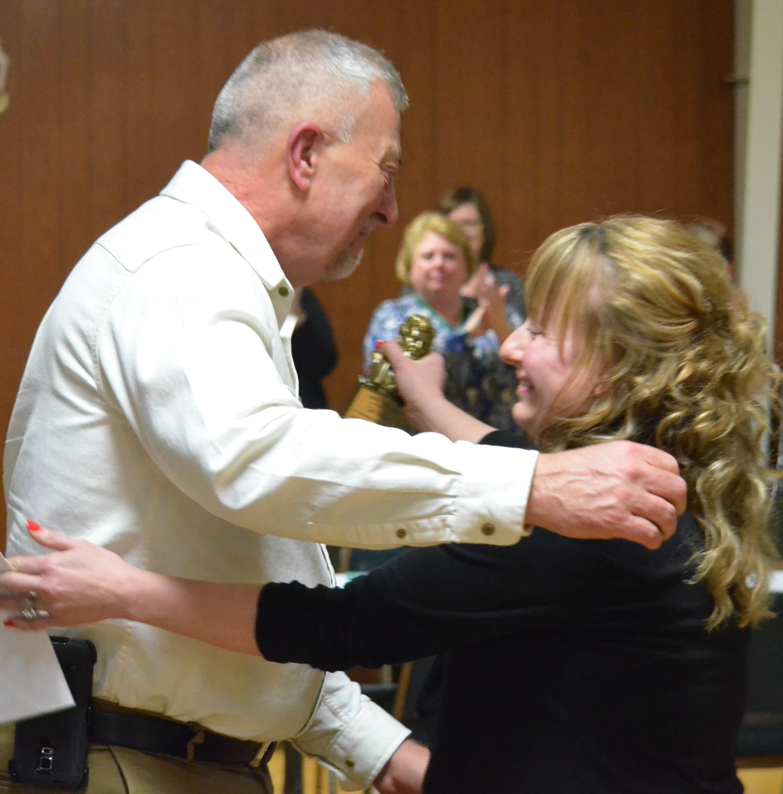 Carl Rhodes gets a hug from Kelly Washburn, the 2015 Chamber secretary, upon receiving an Abe Award from Washburn.