During my search into the early roots of my son’s family tree, I have often bumped up against Newton Coffey, although never connected with him.

Considered one of the first settlers of Montgomery County, Newton Coffey came to the area along the Hurricane in the spring of 1817 with his wife, Sarah, and seven children. He was a member of the first Montgomery County grand jury and served with Maj. James Wilson and Harris Reavis as the first county commissioners.
The first crops ever raised on the Hurricane was in 1817 and planted by Newton Coffey. His son, Cleveland S. Coffey, told that his father cleared 10 acres of timbered land that season and raised corn.
Cleveland also related that when they gathered their corn, they gathered it in a cart with shafts fixed to it and worked one horse. They would back up the cart to the pile of corn and loosen the far end, and take out the hind gate and let the corn in and out. When they got the corn all gathered and in a pile, his father got up on the pile of corn and hollowed out, “Bye, Blueridge.”
During all my years of bumping into Newton Coffey in my searches, I had never seen a picture of the man … until now.
The CDV image above of Newton Coffey was found in a photo album shared by Jim Landers of Indiana. The album, which had been passed down through his family, contained many old photos, several identified by family names, including Reavis and Landers.
Newton Henry Coffey was born in North Carolina, probably Wilkes County, about the year 1776 and emigrated in 1806 to Adair County, Kentucky. From there, he came north to Montgomery County in 1817 with his wife and seven children, Cleveland, Martha ‘Patsy’, Ruth Eliza, Nancy, Colbert, Thomas and Murray.
Early church records of the Hurricane Church note that monthly church services were held in the various settlements, including “Newton Coffey’s timber,” with Coffey hosting the congregation in September 1819. Another entry in the church books tell that it was “agreed the Coffey settlement needed help with sick and bread corn.”
Newton Coffey had a big part to play in the platting of Hillsboro as the county seat of Montgomery County. The commissioners charged with deciding on a site could not come to an agreement over the already-selected site of Hamilton, because it was not in the center of the county.
The History of Bond & Montgomery Counties, Illinois, published in 1882, contributes this information: “The Commissioners had heard of a man living in the south part of the county, of the name Newton Coffey, who was said to have fifty dollars in money, something very unusual for a pioneer citizen of Illinois at that day.
“So they sent for him and prevailed upon him to enter the land, as none else had money enough to do so. Coffey entered the land, made a donation of the usual twenty acres for public buildings and proceeded to lay out the town of Hillsboro.”
He was a man, as the saying goes, “his word was as good as his bond.”  His well-supplied corn crib and smokehouse was the means of furnishing many of the early settlers who came here with meat and bread.
He was one of the first justices of the peace. His wife, Sarah, was a very amiable woman, and a great deal of their wealth may be attributed her industry and economy.
Sarah preceded her husband in death in November 1845, with Newton Coffey dying on Aug. 16, 1858.
It is one thing to read about Newton Coffey and of the contributions he made to the early settlement of our area and it is quite another to be able to hold a photograph of this hardy settler, born at the time of the Revolution, in my hand. 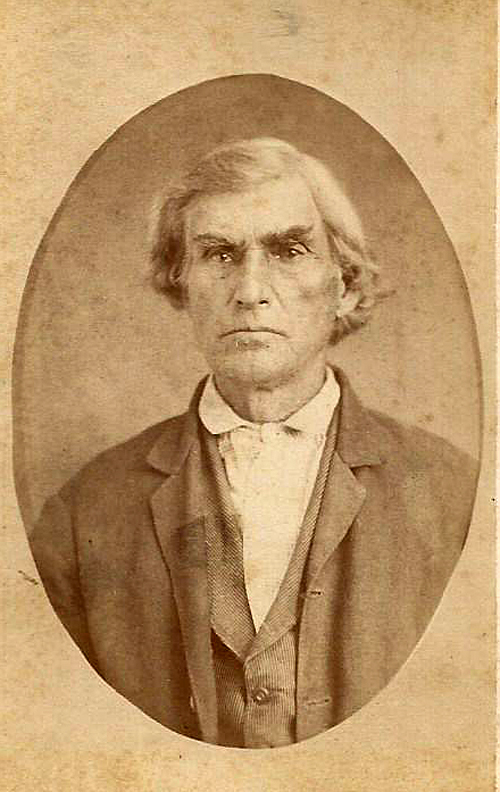