The birthplace of Abraham Lincoln’s political career will again celebrate the birthday of the 16th president with two events next weekend
The celebration kicks off next Saturday evening with the fifth annual Lincoln Victory Ball, an event featuring local residents in period dress performing period dances to period music.

The Vandalia Tourism Commission is sponsoring the ball, which will be held from 7-10 p.m. at the Vandalia Moose Lodge.
There is no admission charge for those dressed in period clothing, and the cost for others is $5.
Salt Creek Band returns for this year’s ball, and a caller will again be on hand to lead participants in period dances, according to Mary Truitt of the tourism commission.
And again, attendees will be treated to desserts and drinks. Truitt said that members of Fayette County Home and Community Education units will be making homemade pies for the ball.
New this year are door prizes, which are being provided by members of the Vandalia Chamber of Commerce.
“It’s a fun evening for people who enjoy dressing up in period clothing and dancing the dances that our residents performed when Abraham Lincoln was a state representative right here in Vandalia,” Truitt said.
“But, it’s also an enjoyable evening for those who choose not to be involved in the dances,” she said.
The celebration of Lincoln’s Birthday continues on Sunday afternoon, when the Vandalia Historical Society holds its annual birthday program.
The program will be held at 2 p.m. at the Vandalia Statehouse, in the House of Representatives chambers, where Lincoln began his career in politics as a representative from Sangamon County.
Dale Timmermann, president of the Vandalia Historical Society, said that this year’s speaker is Kevin Kaegy, a Greenville historian. Kaegy will talk about Ann Rutledge, whom some historians believe was Lincoln’s first love.
In addition to delivering the program talk, Kaegy will again have items in his Lincoln collection on display in the Supreme Court Room on the first floor of the Statehouse.
Timmermann is again working to have audio transmission of the program available in the Supreme Court Room for those unable to get up to the second floor of the Statehouse.
There is no admission charge for the program. 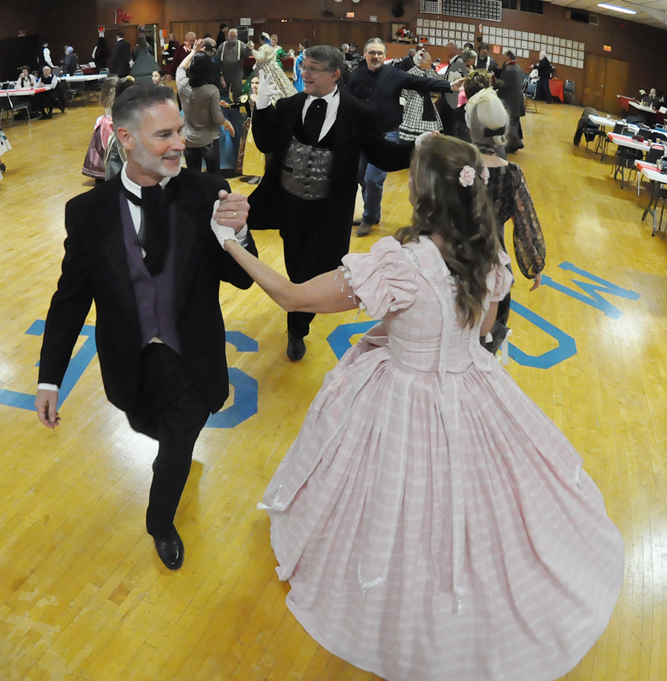 Dr. Brian and Laura Dossett were among the dancers at last year’s Lincoln Victory Ball. This year’s ball is next Saturday.