Even with several key performers missing in action, the Vandalia Vandals celebrated Senior Day by winning two of three wrestling duals on Saturday.
The Vandals were shorthanded for the quad, but still won two out of three. Vandalia topped Robinson, 47-15. The Vandals then knocked off Monticello, 42-30. Murphysboro took advantage of Vandalia's open weights in a 39-37 win over the hosts in the final dual of the day.
Vandalia Coach Jason Clay said the open weights were tough to overcome against Murphysboro.
"We've got four starters out right now, and we couldn't overcome that in that last dual," Clay said. "There were a couple of places where we could have scored some more points, but that's the way it goes. We did pull off two wins today."
Dalton Blankenship, Adam Palmer, Trevor Philpot and Kolten Kaiser were unable to compete due to nagging injuries.
Clay said all four athletes should be back in action soon.
"Once we got all of our guys back and fill out our weights, we'll be all right," Clay said. "Hopefully, we'll get everyone back soon. And when we do, I think we'll be pretty solid. We've gone through the whole gamut of injuries. We should get three or four guys back soon."
Again, it was the final home date of the season for the Vandals.

"It's going fast," Clay said of the season. "It's been one of those seasons where it seems like there's been a lot of ups and downs. We'll keep plugging away. And we'll start working to peak at the end of the year. And I think we will. I have all the confidence in these kids, once we get everyone healthy. We're close. Hopefully, we'll have everyone back next week."
Seniors recognized were Blankenship, Jake Stewart, Ryne Lipsey, Palmer and Eroll Walker.
The Vandals are now 21-7 in duals this season.

Vandalia vs. Robinson
Both teams were open at 106 pounds. Vandalia's Jarrett Paslay pinned Nick Rice at 113, and Vandalia's James Crawford won by forfeit at 120.
Chaston Womack earned an 8-0 decision over Seth Keeler at 126. Lipsey pinned Tanner Murray in 1:37 at 132. Luke Tessman defeated Alex Herman, 13-6, at 138.
Vandalia's Wyatt Goade won by forfeit at 145 and Robinson's Garrett Hayes won by forfeit at 152. Both teams were open at 160.
Robinson's Nathan Worstell edged Skylar Depew, 12-10, at 170. Stewart pinned Hunter Runyon in 1:53 at 182, and Bobby Bradley earned a convincing 10-0 decision over Malik Wood at 195.
Kendrick Woolsey pinned Zach Little in 1:34 at 220 for the Vandals, and heavyweight Nick Trible lost by fall to Robinson's Jacob Ludwig.

Vandalia vs. Murphysboro
The open weights proved key in this one, as Murphsboro won by forfeit at 106, 152 and 160.
Paslay pinned Justin Johnson at 113, and Womack earned a 3-2 win in overtime at 120.
Lipsey handled Steven Bastien, 17-4, at 126. Arieh Hart of Murphysboro edged Tessman, 2-0, at 132.
Tristen Newman pinned Vandalia's Sullens at 138, and Goade won by forfeit at 145.
Patrick Stanton won by fall over Depew at 170. Stewart pinned Dalton Craig in 1:46 at 182, and Bradley won by fall over Dehen Mulrooney in 2:20 at 195.
Woolsey won by fall in just 1:46 over Scott Rose at 220, and Murphysboro's Mason Osterhout pinned Trible at 285 for the final margin.
In other action Saturday at VCHS, Murphysboro beat Monticello, 50-27 and Robinson defeated Monticello, 36-34.

Notes: The Vandals were scheduled to compete at Hillsboro on Wednesday night in a make-up dual.
The Vandals head to Petersburg-PORTA on Saturday. Also competing will be Benton and Beardstown. Saturday's action is scheduled to begin at 10 a.m. 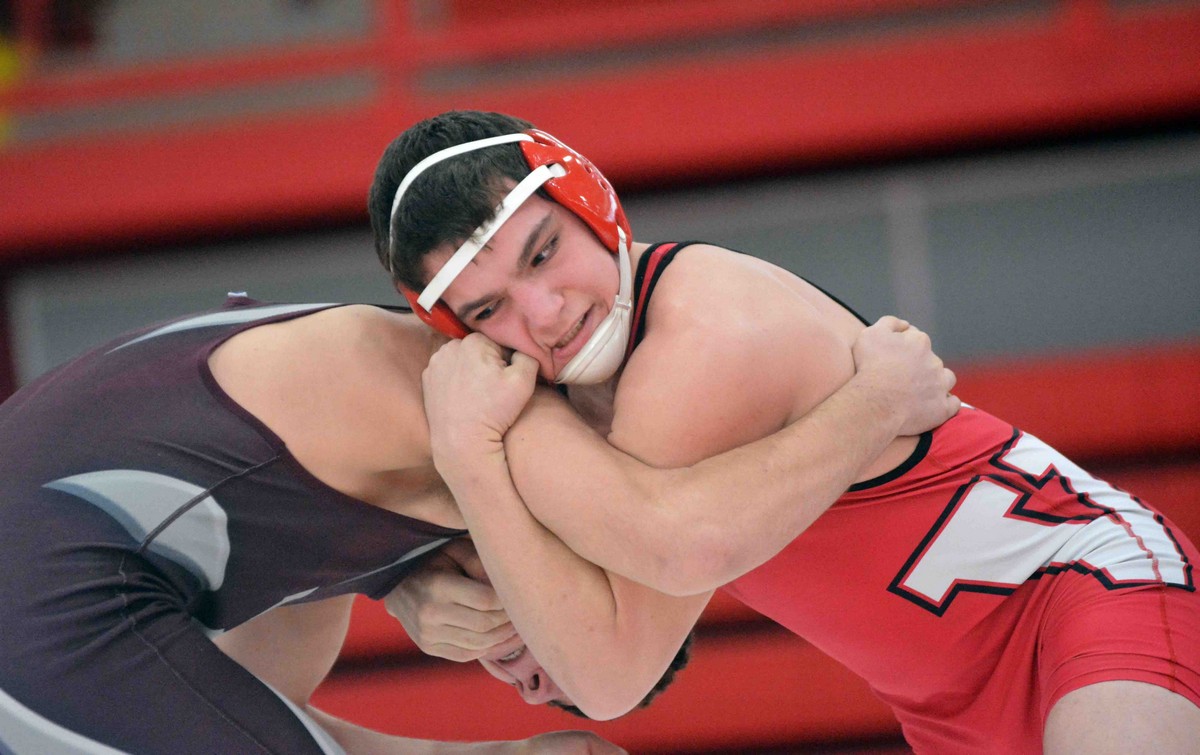 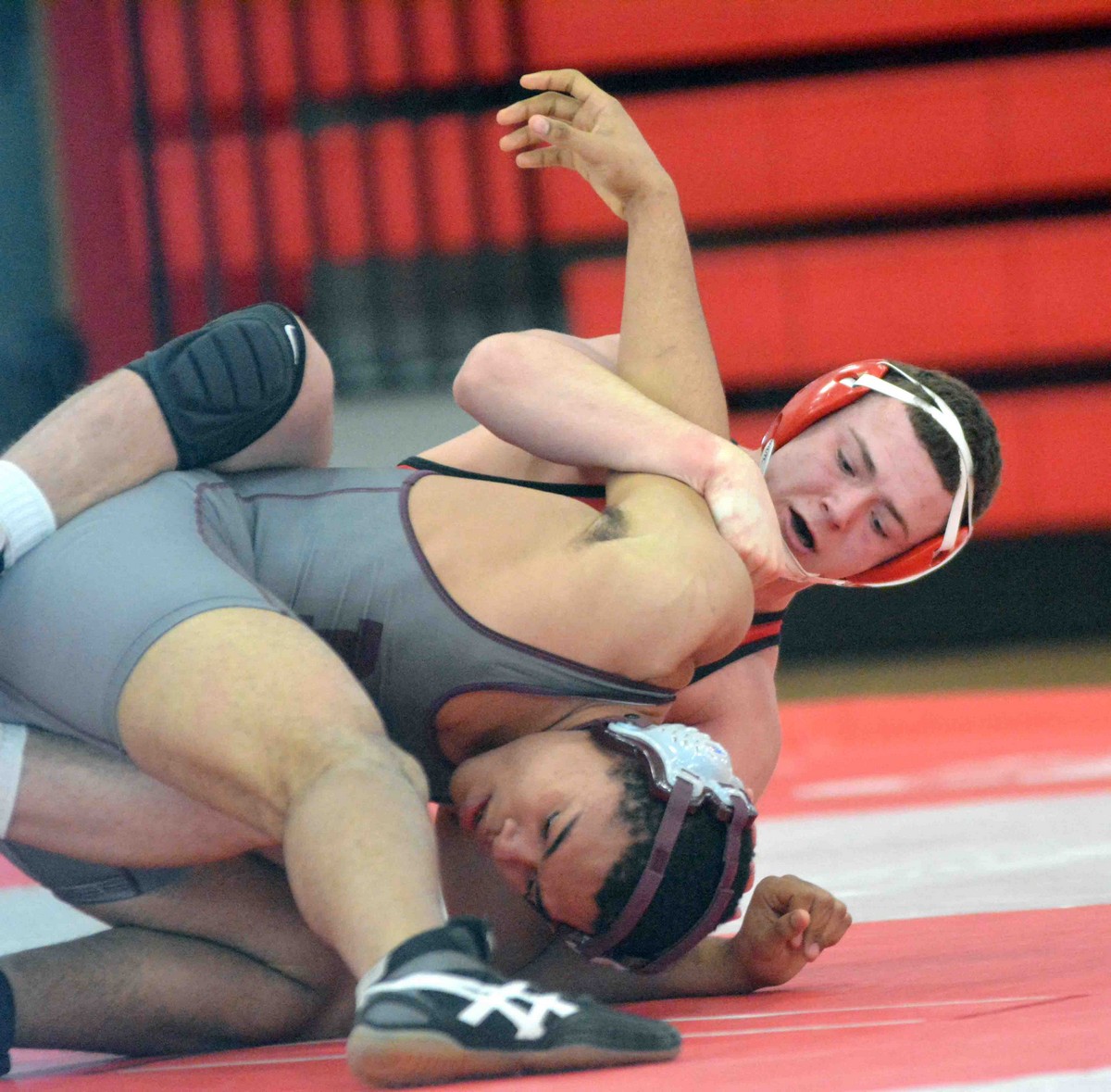 The VCHS wrestling seniors and their parents are pictured.