Greenville simply had too much firepower for the Vandalia Vandals.
Taking advantage of its depth, size and athleticism, Greenville hammered Vandalia, 73-46, on Friday night in front a jam-packed VCHS gymnasium.
Vandalia Coach Brian Buscher said he was proud of his team's effort, but gave the Comets credit, too.
"They're a solid team," Buscher said. "They hurt you everywhere because they're all capable of scoring. Our kids played hard. I'm proud of our effort. I just wish our execution would have been better."
The Comets had a 10-point lead by the break. The Vandals cut the deficit to six early in the third quarter, but the visitors pulled away for good, leading by 16 entering the fourth quarter.
"We fought back a little bit in the third quarter, but we got into a position where we had to gamble," Buscher said. "And that was too much for us. We struggled keeping our focus the whole game."
With the loss, the Vandals fell to 4-13. Greenville improved to 16-2.

Game Recap
There was a huge crowd on hand, with many wearing pink for breast cancer awareness.
Balanced Greenville pulled away right from the start, taking an 18-4 lead.
The Vandals went on a 7-0 run, as Well scored five points and Nestleroad added a layup. The Comets led, 18-11, after one period.
Greenville's Hall got going in the second period, as the senior forward scored nine points in the frame.
The Comets had a comfortable 29-15 lead after a hoop from Holden.
The Vandals went on a 7-0 spurt, with Lott and Nestleroad recording field goals and Well knocking down a trey. Those points cut Greenville's lead to 29-22.
But Greenville's Faulkner somehow was able to drain an off-balance three-pointer from the corner at the buzzer, giving the Comets a 32-22 halftime advantage.
Vandalia scored the first four points of the second half, and it looked like the hosts were going to be able to stay close to the Comets.
But Schaufelberger hit three three-pointers in about a minute. Well hit a triple of his own, but Greenville's Hall answered with a three-pointer and Holden scored inside, giving Greenville a 46-31 lead.
By the time the third period ended, Greenville's lead was 53-37.
The Comets put the game away with a 20-9 advantage in the fourth quarter, as the Vandals seemed to run out of gas.
Greenville's lead went past 20 points with 3:30 left. The Comets finished the game on a 14-3 run for the final score.
Both coaches got their subs into the game late.
"We have to come back to practice and work to get better," Buscher said. "We might see them again at the regional. Hat's off to Greenville. They've worked their tails off. They're having success and they deserve it. I just want to get our kids ready if we get another crack at them."

Notes: It was Paint the Gym Pink for Jen night at VCHS, as Jennifer Knebel was honored at Friday's game. Money was raised for the Jennifer Knebel Scholarship Fund. Proceeds from a 50/50 raffle will go to the Susan G. Komen Foundation.
Greenville won the JV boys game, 54-42.
USA Today award for Greenville QB Hutchinson
Greenville senior Tyler Hutchinson was recently named the USA Today/American Family  Insurance Illinois High School Offensive Football Player of the Year. Hutchinson passed for 3,855 yards on 271 completions with 56 touchdowns. A first team all-state pick, Hutchinson finished his high school career with 10,894 passing yards, the first QB in Illinois high school history to pass 10,000 yards.
Lacale London of Peoria was the USA Today Illinois Defensive Player of the Year, and Derek Leonard of Rochester was the Illinois Coach of the Year. 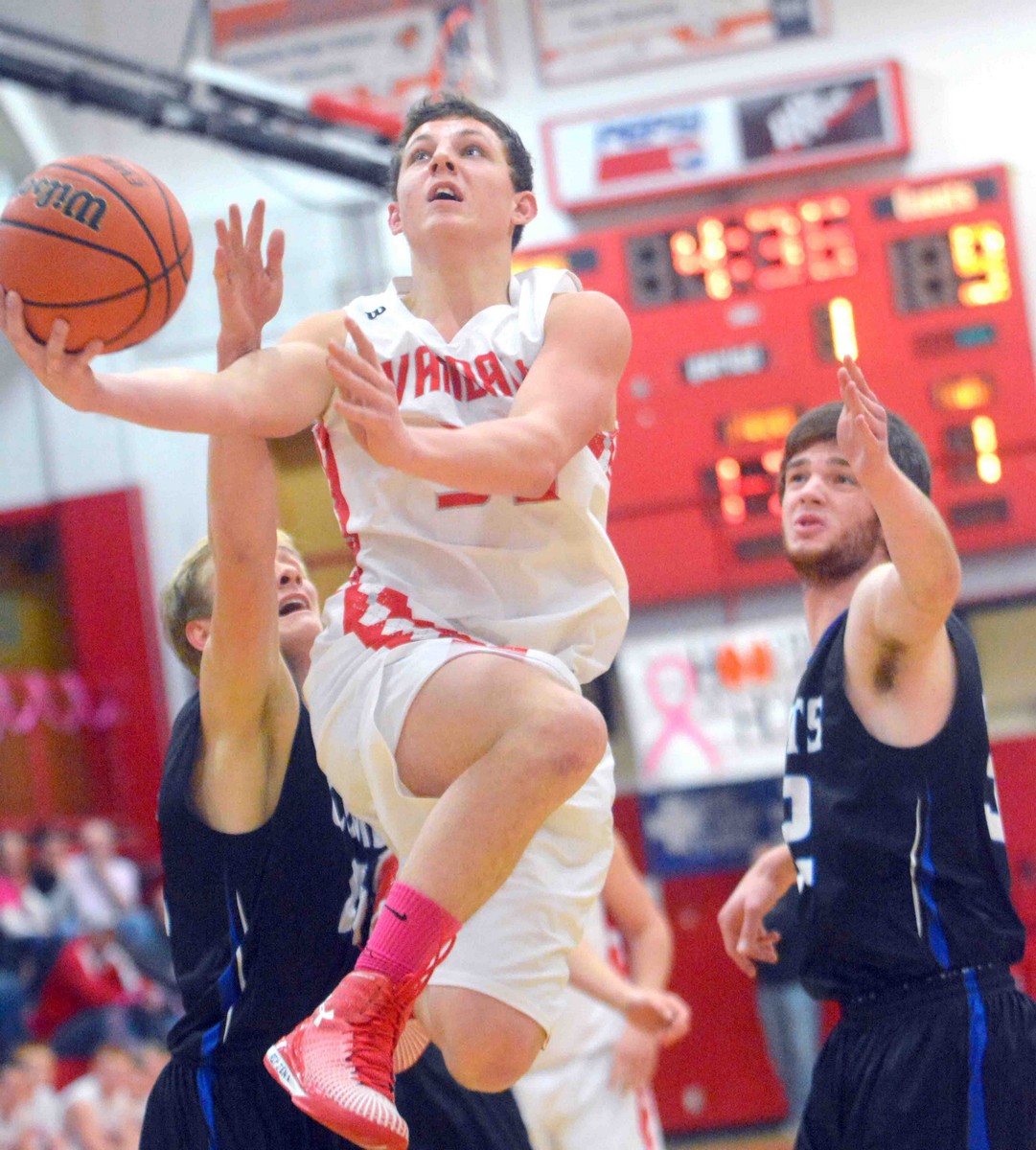 Drake Dokey scores in the lane against Greenville.