Gary D. Graumenz began working with wood when he was just 10 years old, and has become so proficient at the art that he can build anything by looking at a picture of it. He also has the ingenuity, talent and skill to design and build original and workable objects such as a child’s tractor that can be ridden and operated by a child and a wagon to pull behind it.

A Chip Off the Old Block
Gary developed the love and skill of working with wood from his dad (Gary Sr.) and his grandfather (Elroy Graumenz) as he watched them and then was encouraged by them to take up the art when he was just 10 years old.
He had the talent and skill, and as he grew, developed the knowledge of working with the various woods.
He also is part of the family business, Graumenz Construction.
“I use cherry, walnut, oak, and I have a little bit of mahogany, which is not too easy to come by. My uncle bought a boat from Wayne Stevenson and the boat came with a bunch of mahogany to finish the boat; I had just enough pieces to finish a cabinet.”
He likes to work with cherry wood. “Just about everything I make for myself, I use cherry,” he said. He does have a source for obtaining most kinds of the wood he needs.
He can make anything from wood, such as tiny chainsaws to hang on the Christmas tree to large frames to hang porch swings on, chairs, tables, a beautiful jewelry chest on legs, (for which he made the drawers in such a fashion that they won’t accidentally pull out and dump the jewelry) and children’s (or grown-ups’) toys.
His pieces include a rather large, stream-lined boat that has a remote-controlled motor and the tractor that has a space for a motor to be installed, so the child may ride it and pull a wagon.
He has finished a round cooler in various woods (including mahogany), with an inlaid design on top, that is so beautifully finished it could also easily be used as a round table/cabinet in any room in the home, with the added hidden convenience of a roomy storage space within. The distinctive cooler would add beauty, as well as usefulness, to any deck or patio, or be a perfect accent to an outdoor, informal yet gracious wedding or celebration.
Nothing goes to waste in Gary’s workshop, as he can visualize something that can be made from scraps of wood or metal, including little cars, and a handy desk-type chair, comfortable and on rollers, made from a metal frame, and drum parts of a washing machine, using scraps, imagination and skill.
And the Family Graumenz
Gary and his wife, Donna, have children and grandchildren, but thus far, none of the children have really shown a real  interest in carrying on the family tradition. Gary ssaid that he makes a lot of things for Donna, and she encourages him to enjoy his woodworking.
Gary is the son of Gary Sr. and Jill (Arndt) Graumenz.  Gary Sr. is in Graunmenz Construction, and Jill is a familiar face to many, as a manager at McDonald’s in Vandalia.
Gary and family members also built a log cabin.
“We hauled the logs up to the site and had a guy with a portable band-saw come out and saw them up. We took a draw knife and took all the bark off with that, and cut three sides off the logs and put the round side toward the out, and on the inside, we sanded everything smooth,”  he said.
Gary enjoys working with wood in his garage workshop and welcomes requests for building something for others.
“If you show me a picture of what you want, I can try to make it,” he said. 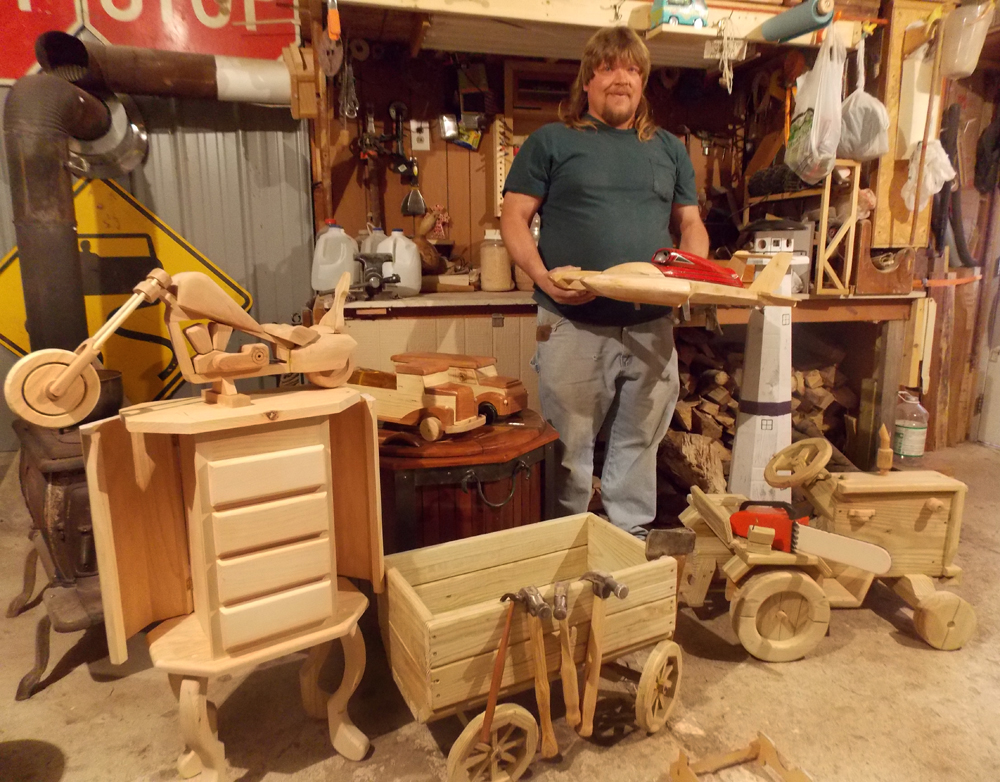 Gary Graumenz is shown with some of his wood creations.