Ignited by a full-court press, the Vandalia Lady Vandals scored 22 straight points in the third quarter and rolled past South Central, 53-36, on Monday night.
The Lady Vandals had a six-point lead at intermission, but then put on an intense full-court press right away in the third period. The press forced the Lady Cougars into numerous turnovers and allowed the Lady Vandals to go on a 22-0 run to put the game out of reach.
By the time the third period came to an end, the hosts were up 45-17.
Vandalia Coach Michelle McNary said her team's press did its job.
"Our girls just got after it," McNary said of the third period. "We were flat at the start of the game. We weren't very intense. And we were trying to do some different things defensively, switching on makes and misses. Once we went man-to-man, we got better. We picked it up, and we pulled away."
South Central Coach Gary Kapper said his team just didn't handle Vandalia's press very well.
"We didn't come out ready to play in the third quarter," Kapper said.

"Their press got to us. We made too many mistakes. When we did break their press, we still mis-handled the ball. That was the difference in the game."
Kapper gave the Lady Vandals credit, too
"They are very athletic and their press really hurt us," Kapper said. "We didn't handle the press. That's something we have to work on."
Sophomore Emma Meyer scored 23 points for the Lady Vandals. Junior forward Makayla Tinker added 13 points for Vandalia, which got back to .500 on the season with the win. The Lady Vandals are now 9-9.
Sophomore guard Abby Hahn scored 17 points to lead South Central, which fell to 5-11 on the season with the loss. Freshman Keely Smith added eight points.
Both teams sat back in a 2-3 zone at the start of the game. Vandalia got three hoops apiece from Tinker and Meyer in the first period, and the hosts took a 16-8 lead into the second period.
Meyer scored two quick hoops in the second quarter, and the lead was 20-8.  But South Central went on a 7-1 run, as Smith and Alannah Sigrist had hoops in the lane, and Hahn drilled her third three-pointer of the first half. Kelsey Swain scored inside for the Vandals, who were clinging to a 23-15 lead at intermission.
Kapper said his team was feeling pretty good at the half, as they were staying within striking distance of the Vandals.
"Actually, we had missed at least four layups in the first half," Kapper said. "We should have been right there with them. I thought we could have only been down one or two."
Nevertheless, the third quarter was all Vandalia.
The full-court press frustrated South Central from the start of the second half, the Vandals got several easy hoops off turnovers, and the lead continued to grow and grow.
Everyone got into the act as the Lady Vandals scored 22 unanswered points for a 45-15 lead, with Meyer and Tinker handling most of the scoring.
South Central's Sigrist hit two free throws late in the period for her team's only points of the frame, making it 45-17.
McNary got all of her bench players into the game in the fourth period. South Central didn't give up, as the Lady Cougars outscored Vandalia, 19-8, in the final frame.
It didn't really matter, as the VCHS lead was never in jeopardy.
"It's a win and we'll take it," McNary said, summing it up.
Notes: Vandalia is home again on Thursday night against Pana.
South Central will begin play at the NTC Conference Tournament at Beecher City on Monday Dieterich at 8:30 p.m..
There was no JV game on Monday. 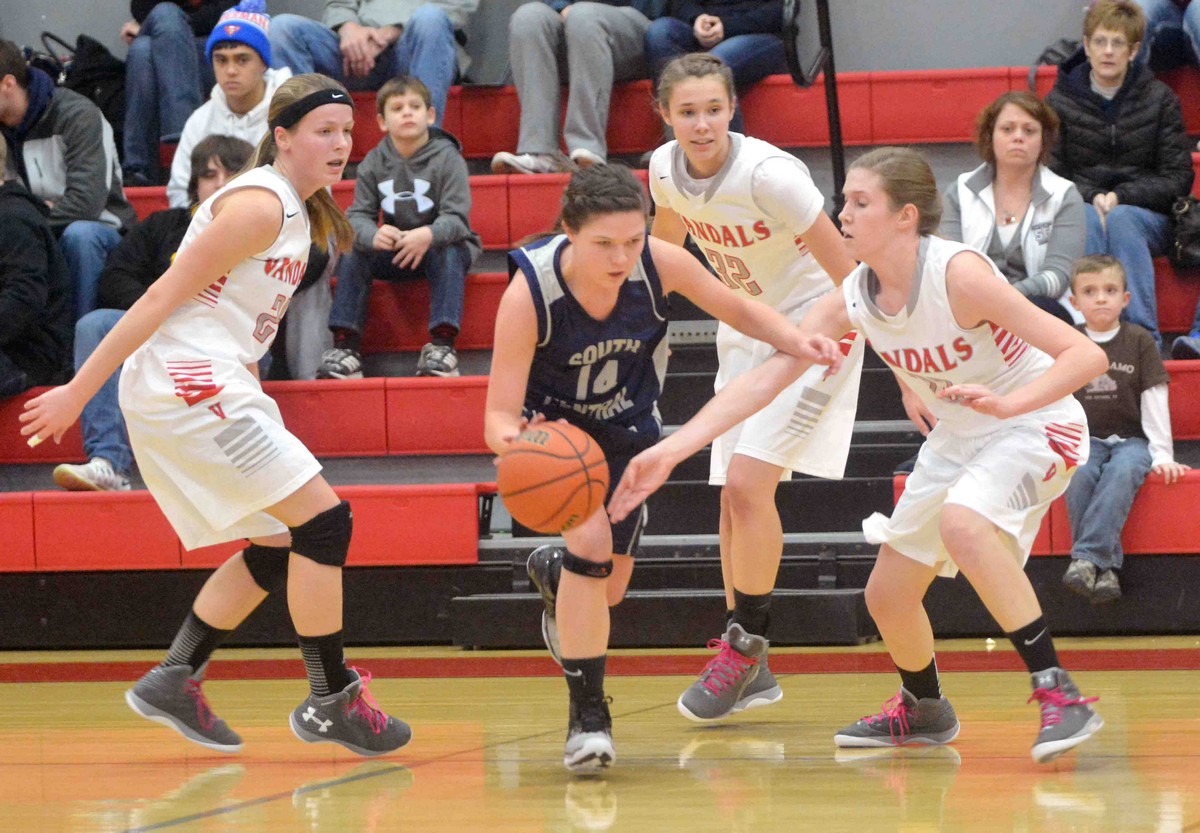