One of the hats I wear is that of editor of Fayette Facts, the bi-annual publication of the Fayette County Genealogical and Historical Society.
Chrystal England is the volunteer who copies obituaries from The Vandalia Union preserved on microfilm, and from these copies I type up an alphabetical list of obituaries from 75 years ago. Currently, we are working on newspapers from January-June 1940.

While working on this project, I turned a page over and the next obituary to type up was that of Mrs. Anna Riffe King, 84, who had lived in Brownstown for about 25 years. As I studied the information, it came to me that this was the same woman who had caught my interest many years before.
I became acquainted with Anna while working on the 125th anniversary book for Brownstown. The King family were members of All Saints Chapel, whose pastor was Orrin Wade Sidener, and a photograph of the church members was included in the history book.
Anna Riffe King was born into slavery.
The King family were known as the only black family in the county, the only exception to Fayette County’s unwritten Jim Crow law.
Anna was born on Oct. 15, 1855, in Albany, Mo., the daughter of Ned and Fannie Riffe. At the time of her death, she was survived by brothers John and Max Riffe of near Albany, Mo., and sister Mariah Taylor of Fleming, Mo., along with two half sisters and three half brothers.
Turning to Federal Census records available on the Internet, I found Anna and her parents in the home of John and Margaret Bissell of Ray County, Mo. Anna’s father, Ned, was born in 1830 in Kentucky, while her mother, Francis, was born in Missouri. Among their children were Mariah, Anna, John, William and Joseph Riffe.
Her marriage to Ausborn King occurred on April 11, 1877 and they were parents of seven children, four sons and three daughters: Walter, John and Ausborn Jr., Fannie, Zelma and Louise.  One son, Archie, preceded her in death.
Ausborn King was also born into slavery in Missouri. His parents were listed as Kalip and Loesa King, and they are shown as slaves of Austin Augustus King, the 10th governor of Missouri.
Austin King was born in Sullivan County, Tennessee, in 1802, a son of Walter and Nancy Sevier King. His grandfather, John Sevier, was the first governor of Tennessee. King was admitted to the bar in 1822 and established his legal career first in Jackson, Tenn., before moving to Columbia, Mo.
He first entered politics as a member of the Missouri House of Representatives from 1836-38 and was elected governor on Aug. 7, 1848.
During his tenure, eight new counties were formed, an overland mail route was established and the Pacific Railroad initiated service within the state.
As governor, he vetoed the Fugitive Slave Act as being unconstitutional. Although he was a slave owner, King sided with the Union during the Civil War. Before his death in 1870, Austin A. King served in the U.S. House of Representatives, 1863-65.
Ausborn and Anna were living in Cartwright in Sangamon County, Ill., in 1880, moving to Illiopolis before 1900. From there, they moved south in 1905 to Fayette County, where Ausborn bought farm ground not far from Ill. Route 185. While living here, they lost their dairy herd from tuberculosis. With care and time, the herd was rebuilt.
An interview with their son, John, in 1950 by Jack Wills and printed in The Vandalia Union revealed that they lived on the farm until the oil boom, when “some people got greedy and forced us off the farm.” John said the family still owned an interest in the farm, and he was fighting to get it back.
At the time of the interview, John, with brothers Walter and Ausborn, and sister Zelma, were renting a farm two miles north of Brownstown, where they raised corn, beans and oats. They milked 14 cows, and among their stock were eight calves, seven horses “that get a bit of use” and a few hogs.
Zelma cared for the 500 chickens, as well as flocks of geese and turkeys, while sisters Fannie and Louise lived in Mt. Vernon.
The Kings were very involved in church matters, first with the All Saints Church in Otego Township and later with Four Mile Christian Church. At the time of the interview, John attended the Christian Church, where he was an elder.
All of the children attended school with his sisters Fannie and Louise graduating from Brownstown High School.
The King family were much like any other hard-working farm family. They took care of their land and stock, helped their neighbors and were churchgoing folks. In one respect, the Kings were not like most people, for none of them smoked, chewed or drank.
John told of a time that he and his brothers were in the barn trying out their first chew when they heard their father coming. “We were afraid he’d see the tobacco juice on the ground, so we decided to swallow it, plug and all. Well, sir, that’s the last time we’ve ever touched tobacco.”
John remarked that he had always been a farmer and this was all he knew. A marker for the King family in Griffith Cemetery records the dates of birth and death for all but Archie, who preceded his parents in death. 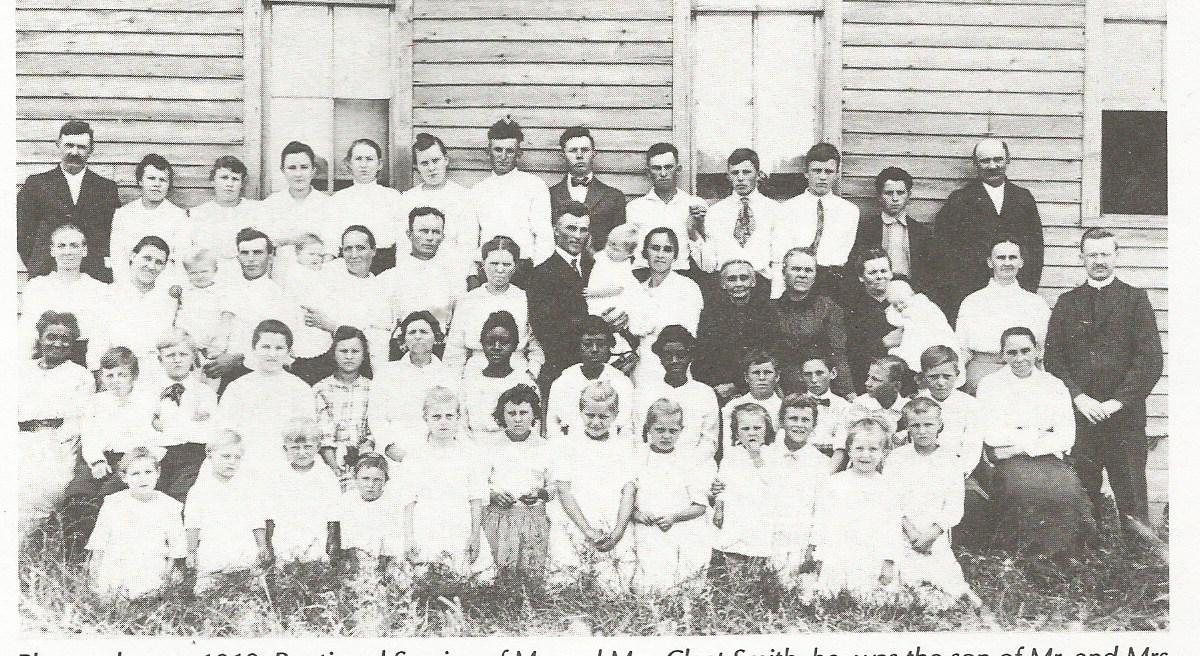