The Vandalia Holiday Tournament ended in disappointing fashion for the host Vandals.
Shelbyville knocked off Vandalia, 60-53, in last Tuesday's fifth-place game of the 43rd annual event.
The Vandals had an off-shooting night, and also allowed the Rams to convert numerous points in the paint.
And after solid performances in the first four games of the tourney, the Vandals looked out of sync in the finale. That was disappointing to see, Vandalia Coach Brian Buscher admitted.
"We didn't play very well as a team tonight," Buscher said. "We looked liked five guys who didn't know how to play together at times. And we missed some shots. That was part of it, too. It was frustrating. I'm sure our players are frustrated, too."
The loss dropped the Vandals to 2-11 on the season. Vandalia beat Maroa-Forsyth and St. Elmo/Brownstown at the tourney, with losses coming to St. Anthony, Flora and Shelbyville.
Overall, the Vandals played well at the event before Tuesday's fifth-place game.
"The first four games, for the most part, we played tremendous," Buscher said. "There were some spots where we didn't play well. But for the most part, I thought we had a pretty good tournament. There was an eight-minute period against St. Anthony where we didn't play well. We had a shot against Flora. Tonight wasn't a good night for us, though."
Buscher said his team will regroup, and hopefully, continue improving.
"We don't have to change what we're doing," Buscher said. "Hopefully, we'll come back in the second half of the season and play a lot better than we did tonight."
There were some bright spots for the Vandals. Senior guard Collin Nestleroad scored 23 points and grabbed 11 rebounds. Nestleroad was solid all tourney long, earning all-tournament honors.
"Collin and Richie Well both had good tournaments," Buscher said. "Collin scores, but he also gets a lot of boards. We need more players doing that. I love the way Collin plays."
Nestleroad scored 99 points in the tourney, while Well scored 60 points in five games.
Freshman Nathan Casey contributed 13 points and five rebounds, while senior guard Austin Durbin added six points.

Game Recap
After a feeling out process in the first quarter, Shelbyville took a 13-12 lead into the second period.
The Rams pulled away a bit, gaining a six-point lead, getting several putbacks inside.
"They got about every offensive rebound they wanted to," Buscher said of the Rams. "It felt like every time they scored it was a putback."
Nestleroad swished a three-pointer from near half-court at the buzzer, and the Vandals were only down five, 30-25, at halftime.
But Shelbyville used a big third period to pull away, outscoring Vandalia, 19-11. The Rams were up 49-36 heading into the fourth quarter.
For a moment it looked like the Vandals were about to be blown out, as Shelbyville led 55-39 with 4:15 to play.
But the Vandals had one last run in them.
Vandalia went on an 8-0 spurt, with Casey scoring five points and Well making three free throws. Suddenly, Vandalia was within striking distance at 55-46.
After a hoop from Kelly Jones and two free throws from Nestleroad, the Vandals were down, 56-51, with one minute to play.
But Shelbyville's Tristan Wade broke free for a layup and then the Vandals missed a three and had to foul.
After Shelbyville missed two free throws, the Vandals missed three shots from in close and then had to foul again.
Wade hit two free throws that all but sealed the win.
"A lot of our shots just didn't fall, but we still had a shot," Buscher said. "We were competing. We didn't give up. Maybe we needed some leadership to step up."
Wade led the Rams with 16 points and eight rebounds. Tyler Hendryx and Devin Peterson added 11 points apiece for the Rams, who improved to 7-5 on the season.

Notes: The Vandals played the tourney without the services of senior forward Robby Lott, who was out of town for the holiday.
Vandalia is scheduled to return to action on Friday at East Alton-Wood River. The Vandals will be home on Saturday night against Pinckneyville. 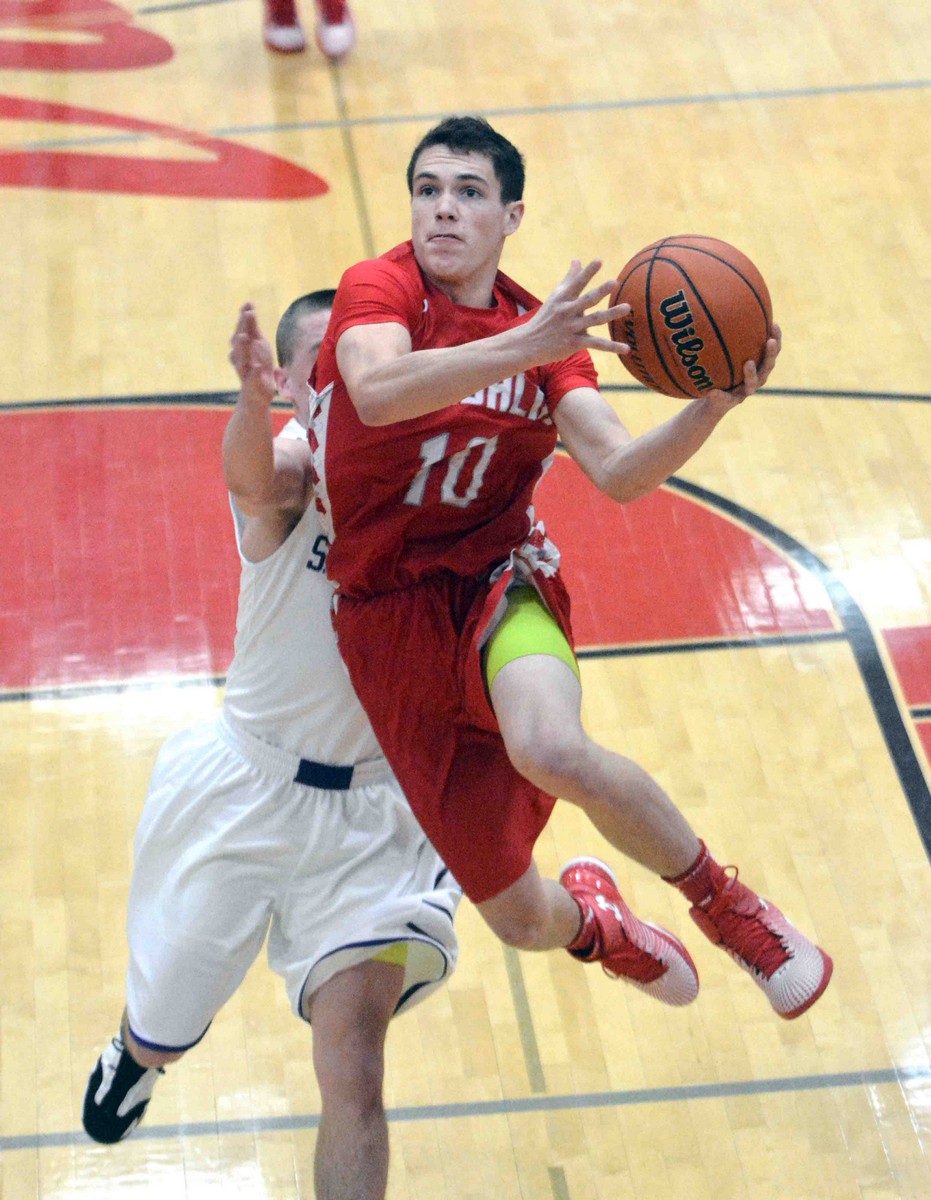 Vandalia senior guard Collin Nestleroad soars to the hoop for a layup against Shelbyville during the fifth-place game of the Vandalia Holiday Tournament. Nestleroad was an all-tourney pick.