The word was out – Santa Claus was taking some R & R following his busy Christmas night at Al and Susann Schumacher’s Vandalia home, reindeer and all.

It seemed the logical location, as the Schumacher’s home has a large lawn for the reindeer to graze in, plus Vandalia Lake flows right against the yard, easily accessible for Dasher, Dancer, Prancer, Donder, Blitzen, Vixen, Comet, Cupid and Rudolph to get a drink after the long around-the-world-journey delivering gifts.
A quick phone call to Al and Susann brought the desired result – an appointment to talk with Santa before Mrs. Claus sent his red traveling suit to the cleaners for its yearly cleaning.
We had heard that a little girl named Aubrey had some questions about Santa, and we hope this face-to face conversation with Santa will help her believe… as we all do.
Al and Susan Schumacher – Santa’s Helpers
Mrs. Schumacher opened her front door, and there was Santa, relaxing in Al’s recliner chair, with his hat hanging on back of chair as he enjoyed a cup of hot chocolate and a plate of cookies.
The reindeer could be seen through the large living room window, walking around in the back yard.
Santa welcomed us with a hearty Ho, Ho, Hello!  He  appeared a little sleepy and about to doze off, but was willing to answer any questions that Aubrey and other children might have.
He first expressed his gratitude for Al and Susan Schumacher, his helpers at Christmas time. He said that they have helped him for several years now, and he especially appreciated them sharing their home after Christmas, so he and his reindeer could rest before the trip back to the North Pole, the elves,  and the work awaiting them at the toyshop.
“You see,” Santa said. “The elves will not see me for about a week, as I need to rest, then we will start working again on next Christmas.
"The elves keep busy all year also, as they help take care of the reindeer, make toys, help check the list of children’s wishes and also do all the gift-wrapping. “But Mrs. Claus oversees the gift-wrapping,” Santa said.
She is busy also at Christmas time. “She makes personal appearances with me before Christmas. Sometimes the children are afraid of Santa; they don’t understand. But she reminds them of their grandma, so they will sit on my lap and sometimes get their picture taken.”
Children’s Questions for Santa
Do you get requests for children to return the toys for something alse?  “No,” Santa said, “I believe we get it right the first time.”
When there is no snow, how do you use your sleigh?   “The reindeer can fly,” he said, “And when they ask where my sleigh is, I say, ‘Where is the snow?’” he said, chuckling.
Does Mrs. Claus send your suit to the cleaners?  “Yes, every year, because it gets a lot of wear and tear at Christmas."
Does Mrs. Claus have hot cocoa and cookies waiting for you when you get back home to the North Pole? “Yes, she doesn’t go in the sleigh with me to deliver presents. She goes on back home to clean up after the elves. The elves are pretty messy, getting things ready at the last minute, all that paper and bows and making sure the right names are on the gifts.
“But she has cookies waiting for me. I am really tired after the trip around the world, so the elves take care of the reindeer when we get back. The reindeer are pretty important. I couldn’t make the trip without them."
Santa’s elves are very important, too.  “The children’s requests are so different now – iPods , hand-held electronic games and so on. I depend on the elves to keep up with those things. As busy as I am, I can’t keep up with it. I even depend on my elves to set my watch. It is important that my watch is right, because I have to be on time.”
Santa Now has More Room …
.. in his sleigh and his sack full of gifts is not as heavy, because, “Children used to ask for rocking horses, rocking chairs and sleds; now, we have little packages with a radio and smaller gifts like that,” he said.
Starting Over…
“We, the elves and I, have to start today to be ready for next Christmas. The elves never rest; they are constantly going and they keep me going,” he said.
“My work clothes …
… in the toy shop at the North Pole are always red,” he said. “I have red trousers, red suspenders, I usually have a red flannel shirt.
“I have to relax now; the elves won’t see me very much until the next week. Mrs. Claus takes very good care of me.
Santa Claus Began Nodding Off …
… and the plate of cookies began slipping from his lap, so we said goodbye to him and thanked his Vandalia helpers, Al and Susann Schumacher, for their graciousness in sharing their home.
Al said a little neighbor boy said he thought they (the Schumachers) were special, because they were chosen to be “Santa’s helpers” – we think they are special too.
And Santa and Mts. Claus must feel the same way about them because,  surely, the most important qualification to be  Santa’s helpers is to be “special … like the Schumachers. 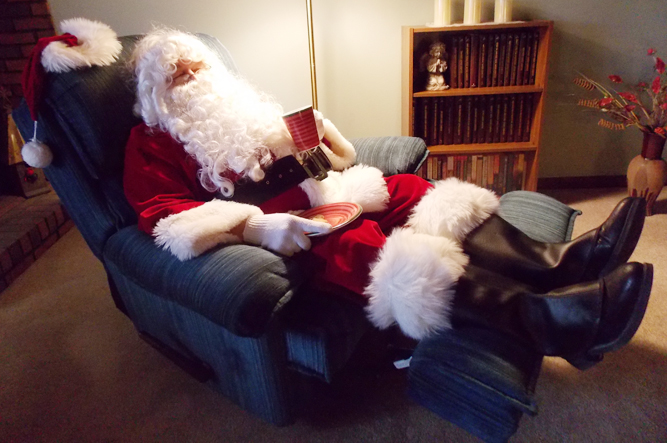