Rachel Bell and Colby Parks, both of Madison, Wis., were united in marriage in a ceremony at 4:30 p.m. on June 7, 2014, at First Lutheran Church in Middleton, Wis., with the Rev. Zach Nielsen of the Vine Church in Madison, Wis., officiating.

The bride, the daughter of Dave and Jane Bell of Vandalia, was given in marriage by her father.
She wore a floor-length, ivory sating dress with a flowing train. The fitted bodice had lace detailing around the neckline, off-the-shoulder sleeves and satin-covered buttons down the back.
The dress was originally purchased by the bride’s grandmother in 1949 from L.S. Ayres Department Store in Indianapolis, and Rachel was the eighth bride to wear the dress, after her grandmother, two great-aunts, mother and three aunts.
The bride’s chapel-length veil was also first worn by her grandmother, in 1949. The handmade lace veil, purchased in Bruges, Belgium, has become a family heirloom. Rachel was the 19th bride to wear it.
The bride’s bouquet, in soft yellows and whites, included tulips, stock, viburnum and other spring flowers and greenery. The flowers were grown at a farm outside Madison, Wis.
The bride chose a cousin, Kristen Kaltenthaler of Phoenix, Ariz., as her maid of honor.
Bridesmaids were friends of the bride Brittany Hartwell of Lawrence, Kan., Lisa Uhl and Kelsey Bulat of Des Moines, Iowa, and Meaghan Nelson of Boise, Idaho; and Breann Cartwright of Platte City, Mo., sister of the groom.
The maid of honor and bridesmaids wore knee-length dresses in navy chiffon with A-line skirts and V necklines.
The groom is the son of Alan and Jackie Parks of Kansas City, Mo.
He chose a friend, Matt Roach of St. Louis, Mo., as his best man.
Groomsmen were friends of the groom Adam Osborne of Chicago, Chris Jaeger of Rochester, Minn., Rick Seagrave of Merriam, Kan., Andy Draper of Lee’s Summit, Mo., and Jason Tischer of Warrensburg, Mo.
Serving as ushers were brothers of the bride Michael Bell of Vadnalia, Drew Bell of Kansas City, Mo., and Daniel Bell of Champaign; and Steve Cartwright of Platte City, Mo., brother-in-law of the groom.
Following the wedding, a reception was held at The Majestic Theatre in Madison, Wis.
The couple honeymooned in Breckenridge, Colo., and now reside at 109 Eagle Heights, Apt. I, Madison, Wis. 53705.
The bride earned bachelor’s and master’s degrees in diet and exercise from Iowa State University. She is a clinical dietitian at the University of Wisconsin children’s hospital and sports dietitian for University of Wisconsin Athletics.
The groom earned a bachelor’s degree in chemistry from Rockhurst University and a medical degree from St. Louis University, completing an anesthesia residency at the University of Wisconsin in 2014. He is a regional anesthesia fellow at University of Wisconsin Hospital and Clinics. 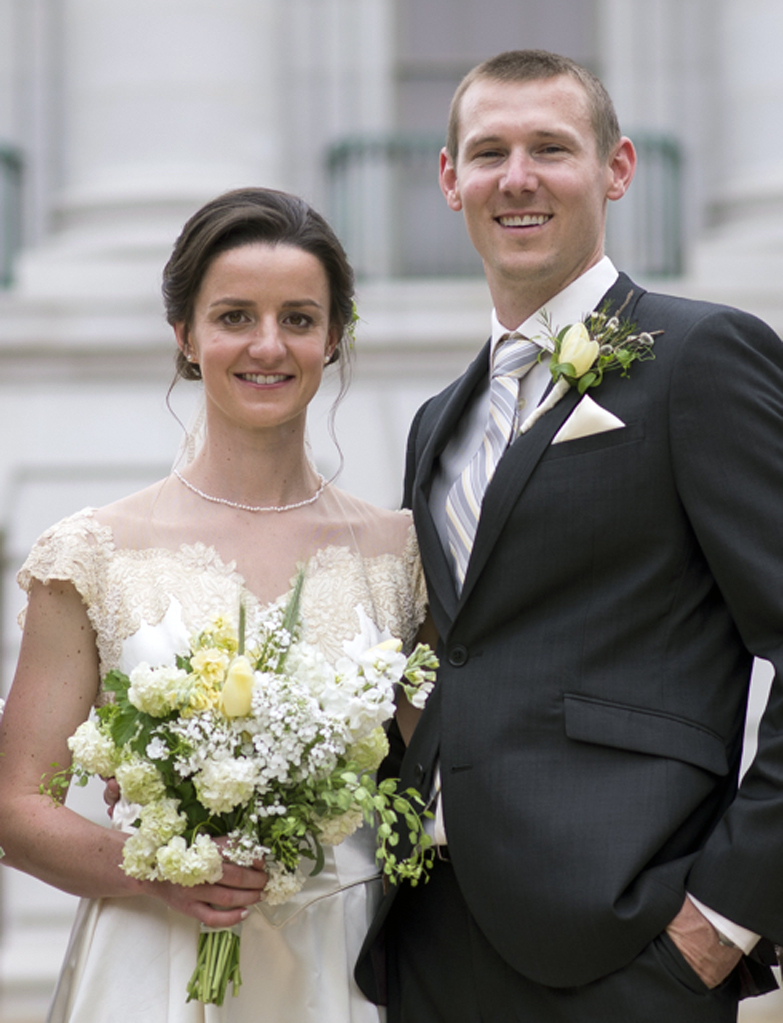