Long before protestors across the nation were calling for police officers to wear body cameras, a Fayette County deputy broached that idea to the county’s state’s attorney.

Now, law enforcement officers throughout the county are manned with those recording devices, thanks to a fund generated through drug arrests in the county.
Fayette County State’s Attorney Joshua Morrison said that he was approached by Chris Smith, who last month began serving as this county’s sheriff, about using Morrison’s drug seizure fund for body cams.
Morrison gave the OK, and Smith and another county deputy, Larry Halleman, researched different models of cams and gave their recommendation to the state’s attorney.
To date, Morrison has used more than $10,000 to buy body cams, along with large memory cards, to put body cams on all county officers, as well as municipal officers in Vandalia, St. Elmo and Brownstown, and Illinois Commerce Commission and Secretary of State officers working in Fayette County.
“It’s a safety tool for all of us (in law enforcement) and the public,” Smith said.
“It’s a great tool in prosecuting crimes and for telling an officer’s side of the story,” he said.
The cameras, he feels, not only will help reinforce what an officer puts down in his report or proves the officer’s statements in any confrontations, their mere presence can be of benefit.
“Once officers began wearing tazers, violence against police officers went down, just because it was known that they were wearing them,” Smith said. “I expect it to decrease even more with officers wearing body cams.”
Smith and the heads of other agencies, including Vandalia Police Chief Jeff Ray, were charged with developing a policy for the use of body cams – the only current requirement under Illinois law.
Ray said that as a member of the International and Illinois Associations of Police Chiefs, he had access to hundreds of model policies. “I picked what I thought would work best for us.”
Vandalia officers were first to wear body cams purchased by Morrison, but only on a trial basis.
“Honestly, I was on the fence at first,” Ray said. “I didn’t know if it was a good thing or not.”
Ray got body cams for two officers, Brian Roedl and Rob Blackerby, and had them wear the units for one month. “After I saw how they were working for those officers, and the value that they have, I told Josh (Morrison), ‘I’ll take one for everybody.’”
So, now, all city officers wear body cams, and the same is true for Smith’s department, with even part-time deputies wearing the cams.
All agree that the body cams have numerous benefits, one of the biggest ones being the ability to prosecute criminal offenders.
Morrison cited the example of an officer pulling a motorist over for speeding, and during the traffic stop, notices the smell of marijuana.
“Statements of the officer and the offender are recorded, and there is no question what was done and what was said,” Morrison said.
“It’s a beautiful tool for cases like that,” he said.
Another example, one cited by both Morrison and Ray, is an officer pulling over a driver that he or she believes is intoxicated or under the influence of drugs.
“You can see the person’s actions, and reactions,” Morrison said. “You can see things that before you could only put down in written reports.
“The footage that these cams will record will be of great value when it comes to prosecuting individuals in court,” he said, adding that the units also have a night vision function and record still photos and videos simultaneously.
Morrison mentioned a domestic violence call in which a person indicated at the time of the call that she had been struck in a certain area that day. Her claim was disproven by the presence of bruises, which indicated injuries sometime previously.
“Those are the kinds of things the body cam footage is useful for,” Morrison said. “The quality of footage is such that you can see a lot of things in great detail.”
Ray said, “There are only so many things that you can articulate in a report. You can only be so descriptive.
“With the body cam (footage), you can actually see how drunk someone is, the slurred speech, the loss of balance, someone passing out when you’re interviewing them.
“It’s going to be so beneficial in something like that,” Ray said. “I’m 100-percent behind them now.”
He said that he has already had at least two cases where body cam footage was of great value.
In one case, an individual claimed that an officer damaged his car. Video footage disproved the accusations.
In a second, a person within earshot of others was yelling that an officer was shoving him. Again, body cam footage was used to clear the officer of the allegations.
Smith and Ray have developed policies that govern when body cams will be turned on. Basically, the cams go on for traffic stops, any incidents involving possible criminal activity or warrant arrests.
At other times, when an officer is on private property for a non-emergency call, he or she will ask permission to record footage or announce that they are doing so, with the citizen having the right not to be taped.
“What I tell our officers is, ‘If you have to ask permission to be somewhere, that’s when you have to ask for permission (to turn on the body cam),’” Ray said.
In addition to assisting with the prosecution of cases, Morrison believes the body cams offer a second benefit – officer training.
“You can watch yourself on video and see how you’re handling a traffic stop, possibly seeing some things on which you can improve.
“When you use this as a learning tool, you can become a better officer,” Morrison said. 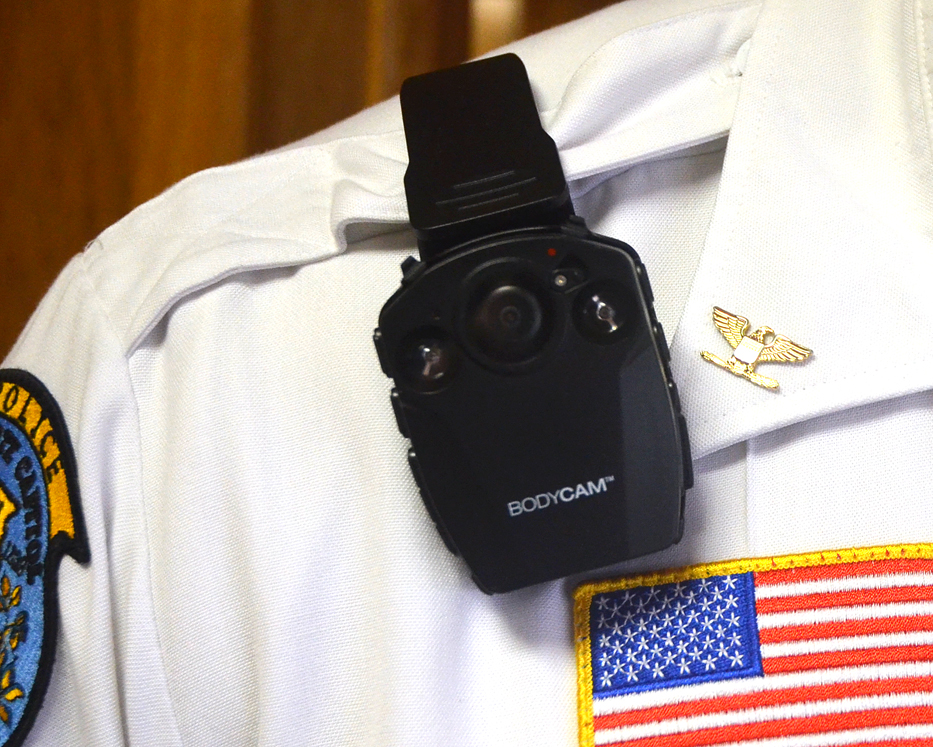