LITCHFIELD — "This one hurts."
That's how Brian Buscher summed it up after his team's disappointing 51-44 loss at Litchfield on Friday night.
Buscher's Vandals battled back from an 11-point deficit and took the lead in the fourth quarter, only to see the host Panthers score the final five points of the game to secure a close victory.
Once again, a victory eluded the Vandals.
"This one hurts because I know it's one we could have had," Buscher said. "I actually think we took a step back tonight. We'll get back to work. We just have to keep getting better."
The Vandals fell to 0-8 on the season with yet another close setback.
Again and again, the Vandals have been in position to secure a win, only to see it slip away at the end.
Litchfield had an 11-point lead at 33-22 in the third period. But the Vandals went on a 10-0 run.

"We had a nice third quarter," Buscher said. "We had better possessions. We got some better looks. And we got on a little bit of a roll in the third quarter."
The Vandals actually took the lead in the fourth quarter, but late in the game, the host Panthers were able to pull out the victory.
The visitors had some missed opportunities late in the game that proved costly.
"If we take care of business earlier in the game, we're not in that situation at the end," Buscher noted. "We have to play 32 minutes."
The Vandals will be back in action at the 43rd Annual Vandalia Holiday Tournament. See related story for more.

Game Recap
By getting hoop after hoop in the lane, Litchfield went on a 10-2 run to end the first period, taking a 14-8 lead into the second quarter.
The Vandals stayed close, as Casey and Nestleroad had hoops for the visitors. But the Panthers finished the first half on an 8-2 run to take a 25-14 lead into halftime.
The Vandals struggled putting the ball in the hoop in the second quarter with some cold shooting from the field. At the same time, the Vandals had some costly turnovers.
Vandalia was still down double figures early in the third period, but then the game suddenly changed.
The Vandals turned things around by taking advantage of Litchfield's miscues while also getting high percentage shots to fall with good ball movement offensively. With hoops from Lott, Dokey, Well and a free throw from Durbin, the Vandals finished the third quarter on a 10-0 run. The visitors had gone from down 11 to down one in about five minutes.
The Vandals took the lead early in the final frame when Casey got free for two hoops inside.
Litchfield answered, and the two teams traded the lead back and forth.
The game was tied at 42 when the Panthers got hoops by Simmons and Cooper Scharf. Lott of Vandalia made two free throws and then Litchfield missed the front end of a one-and-one.
The Vandals had a chance to tie the game, but Durbin's shot in the lane didn't fall with 50 seconds remaining.
Litchfield got one free throw from Simmons for a three-point lead with 33 seconds left. Simmons missed the second free throw but he charged into the lane, grabbed the offensive rebound and scored, making it 49-44 with only 29 seconds to play.
The Vandals missed a shot and then had to foul again. Cooper made one free throw, and after the Vandals missed and fouled again. Scharf hit one free throw for the final margin.

JV rolls
Vandalia's JV boys basketball team rolled to a 78-31 win over Litchfield. The Vandals had a 23-0 lead by the end of the first quarter.
Everyone got into the act for the Vandals, as all 11 players scored. Kain DuFaux scored 28 points and Marcus Zimmerman had 16. 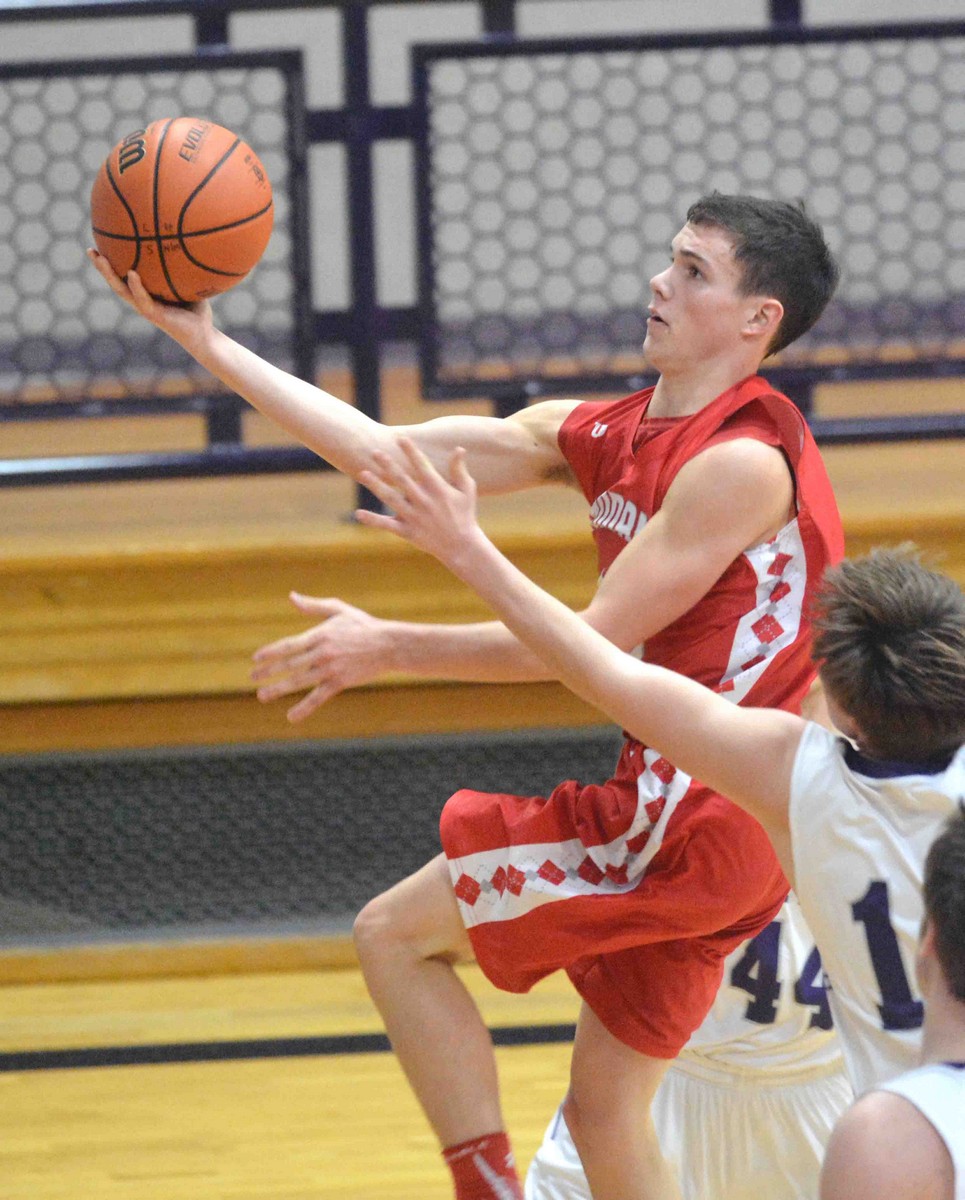 Collin Nestleroad of Vandalia makes a layup during the second half of Friday’s game at Litchfield.