Three duals. Three wins.
That's how Saturday went for the Vandalia Community High School wrestling team.
The Vandals weren't very gracious hosts, as they earned wins over the other three teams in attendance at Saturday's quadrangular.
Vandalia got past Herrin, 49-30, and then had little trouble in knocking off Leroy, 57-14. The Vandals topped Oakwood, 51-25, to finish the day at 3-0.
Vandalia Coach Jason Clay said he saw several positives from his team.
"Our goal was to go 3-0 and we did that," Clay said. "So we've got to feel good about getting three wins. I feel like we're improving on some things. We did some things better than we did Wednesday night. We got a little more offensive on our feet. So these wins are something to build off of."
Clay noted it was a total team effort, too.
"Some of our younger kids battled hard and most of our veteran guys came through for us," Clay said. "Some of our bigger guys like Jake (Stewart) and Bobby (Bradley) looked real good attacking. They were intent on scoring points. That was a good sign."
Clay added it was nice to get many of his wrestlers lots and lots of mat time.
"We got some exhibition matches in there for some of our other kids, so that's always good, too," he said.

The Vandals are now 4-2 in duals this season.

Vandalia vs. Leroy
The Vandals handled Leroy, 57-14, winning all but three matches.
Both teams were open at 106, and Philpot won by forfeit at 113. Leroy's Alex Matlock pinned Chaston Womack at 120, but Lipsey earned a 10-5 win over Trevor Bulington at 126 for the Vandals.
Dalton Jensen of Leroy defeated Tessman, 11-3, at 132, and Leroy's Tyler Walsh beat Phillips, 18-7, at 138.
At 145, Palmer of Vandalia pinned Dylan Woolridge in 1:13. Vandalia's Blankenship won by forfeit at 152.
Vandalia's Kaiser pinned Daniel Cooper in 35 seconds at 160.
Vandalia's Depew and Matt Ledbetter won by forfeit at 170 and 182, respectively.
Stewart of Vandalia won by fall in just 18 seconds over Austin Mullis at 195. Bradley pinned Dayne Wiggins in 1:05 at 220.
Woolsey also won by fall, pinning Ray Rogers in 1:10 at heavyweight.
Vandalia vs. Oakwood
The Vandals finished the day with a 51-25 win over Oakwood.
Oakwood's Kyle Alyea won by forfeit at 106 and Ren Dazey edged Womack, 4-3, at 113.
Vandalia's Paslay pinned Dalton Fox in 52 seconds at 120, and Logan Sullens won by forfeit at 126.
Lipsey of Vandalia earned a win by fall in 40 seconds at 132 over Josh Bartlow, and Tessman pinned Steven Mackiewicz at 138.
Oakwood's Antonio Alverez defeated Palmer, 9-0, at 145. Blankenship beat Austin Shelton, 6-3, at 152.
Kaiser earned another win by fall for the Vandals, this one coming in 37 seconds against Kerrick Sweetland at 160.
Hunter Harrison of Oakwood pinned Depew at 170, but Vandalia rattled off three-straight wins by fall to lock up the dual.
Stewart won by fall over Hunter Phelps in 45 seconds at 182, Bradley pinned Dylan McConkey in 22 seconds at 195 and Woolsey won by fall over Cody Ayers at 220.
Gevin Ashikyan of Oakwood won by fall over Etcheson at 285 for the final margin.

Back points
Vandalia will compete in St. Louis against Whitfield on Friday at 6 p.m. It will be the final action of 2014.
Last Thursday's match at Hillsboro was postponed, as the hosts did not have enough athletes available. No make-up date has been announced. 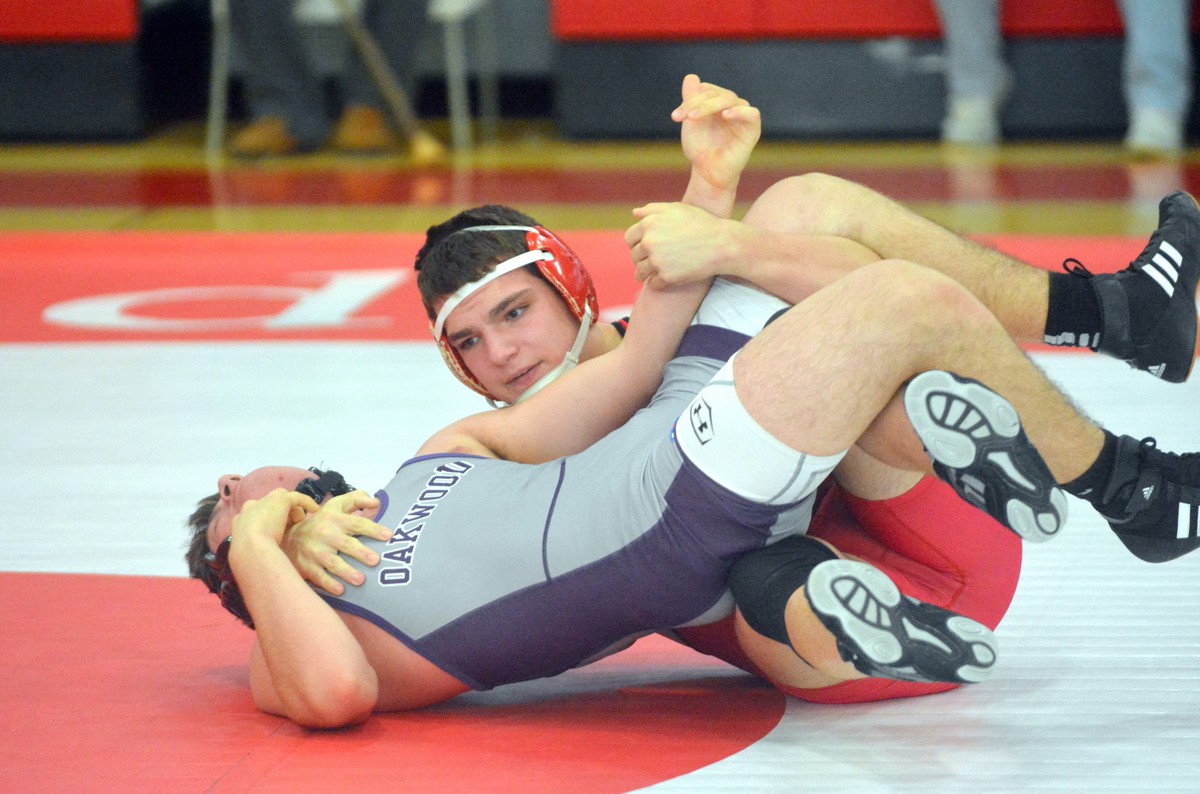