CARLYLE —  As Saturday night's game with Carlyle played out, two key factors emerged.
The host Indians dominated the boards, getting second and third chances again and again with offensive rebounds while holding the visiting Vandals to one and done on the other end.
And as simple as it sounds, the Vandals just couldn't get enough shots to fall.
The result of both of those factors was another loss for the Vandals. Carlyle knocked off Vandalia, 66-48, on Saturday night.
The Indians took advantage of their height advantage inside to control the paint.
"It felt like we did a pretty good job of boxing out in the first half," Vandalia Coach Brian Buscher said. "I was begging for an over-the-back call here and there, but I get it, they're taller. We've got to do a better job of boxing out. In the second half, we lost some focus with boxing out. Their offensive rebounds were big."
The Vandals suffered through a few cold spells offensively, too.
"We struggled putting the ball in the hole," Buscher said. "We didn't score at the right times. We weren't doing bad things, though. We took some quick shots which helped them out, though."
For the most part, Vandalia handled Carlyle's full-court press well. The Vandals just didn't get enough easy hoops against that press. Buscher noted his team didn't get the ball to the middle enough against the Indians' press.
Carlyle also hit some big three-pointers at key moments, as the Vandals were unable to get some defensive stops when they needed them most.
Vandalia slipped to 0-6 on the season. Carlyle improved to 3-4.

Game Stats
No one reached double figures for Vandalia. Richie Well scored nine points, while Collin Nestleroad, Robby Lott and Drake Dokey all scored eight points apiece.
Nathan Casey added seven points, Kelly Jones had six off the bench and Austin Durbin rounded out the scoring with two.
The Vandals made 14 of 25 two-point field goal attempts (56 percent), but the team hit just three of 17 three-point attempts (18 percent).
Connor Toennies scored 17 points to lead the Indians. A 6-4 sophomore, Toennies did most of his damage inside, but he also stepped out and hit two three-pointers. Gunner Bretz scored 14 points for the Indians, who had 11 different players score in the game. Jake Diekemper, a 6-5 senior, also played a factor with his shot blocking and rebounding inside. The Indians made seven three-pointers in the game and made 11 of 23 foul shots.

Game Recap
Vandalia once again got off to a solid start to a game. The Vandals pulled out to a 10-4 lead after three-pointers from Lott and Well, along with hoops from Dokey and Lott inside.  But Carlyle scored five-straight, cutting Vandalia's lead to 10-9 after one period.
Carlyle struggled taking care of the basketball in the first quarter, as the Vandals forced several turnovers.
The second quarter was back and forth all the way, and the game was tied, 20-20, with three minutes left in the first half.
After trading free throws late in the period, Vandalia took a 26-25 lead into halftime.
But Carlyle went on an 9-2 run early in the third period to pull away. The Vandals stayed close, with Nestleroad, Jones and Dokey providing hoops late in the third period.
The host Indians finished the third quarter on a 7-0 run, as Maverick Taylor hit an open trey and Toennies scored on a putback inside. After a couple of free throws, Carlyle had pulled away at 50-38 as the period ended.
Vandalia did its best to stay close, as Lott converted an old-fashioned three-point play. Still, Carlyle pulled away at 54-41, as some turnovers also proved costly for the Vandals.
Casey hit a three-pointer and Well and Dokey made free throws, but a lack of defensive stops didn't allow the Vandals to make much progress. Carlyle then put the game away, as Bretz drained a three-pointer and Jordan Foos scored inside, pushing his team in front, 61-48, with only two minutes remaining.
Carlyle finished the game on a 10-0 run for the final score. 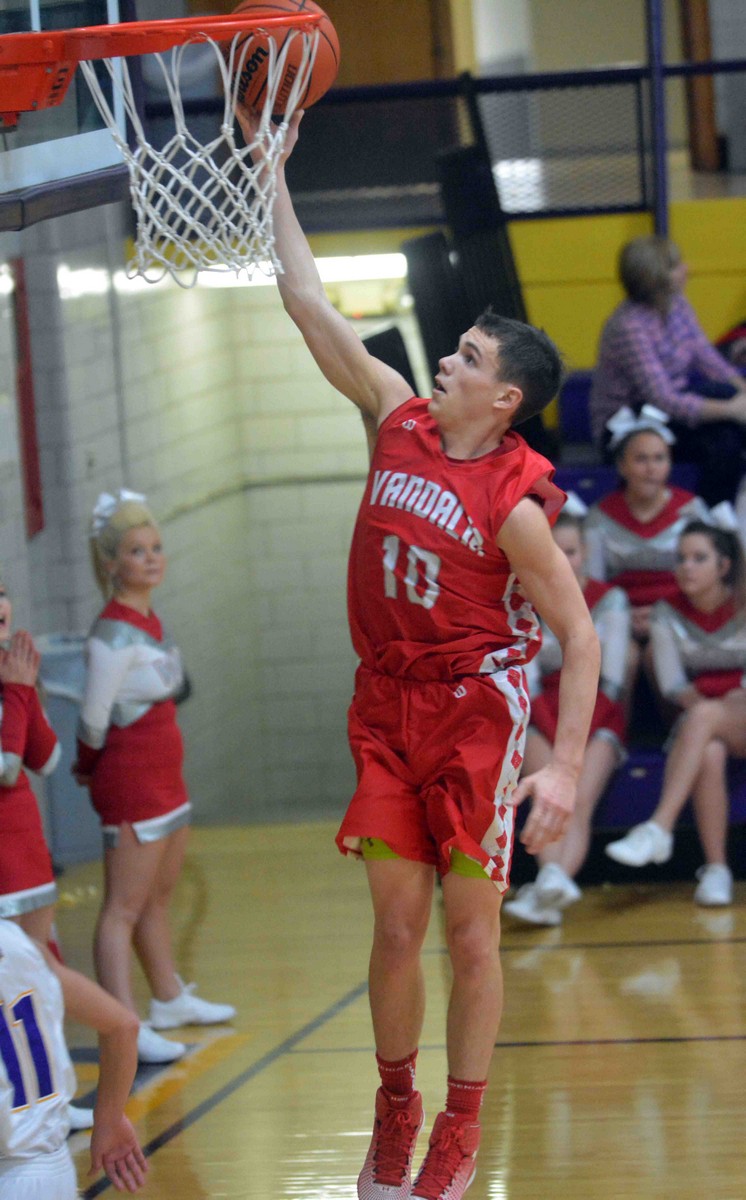 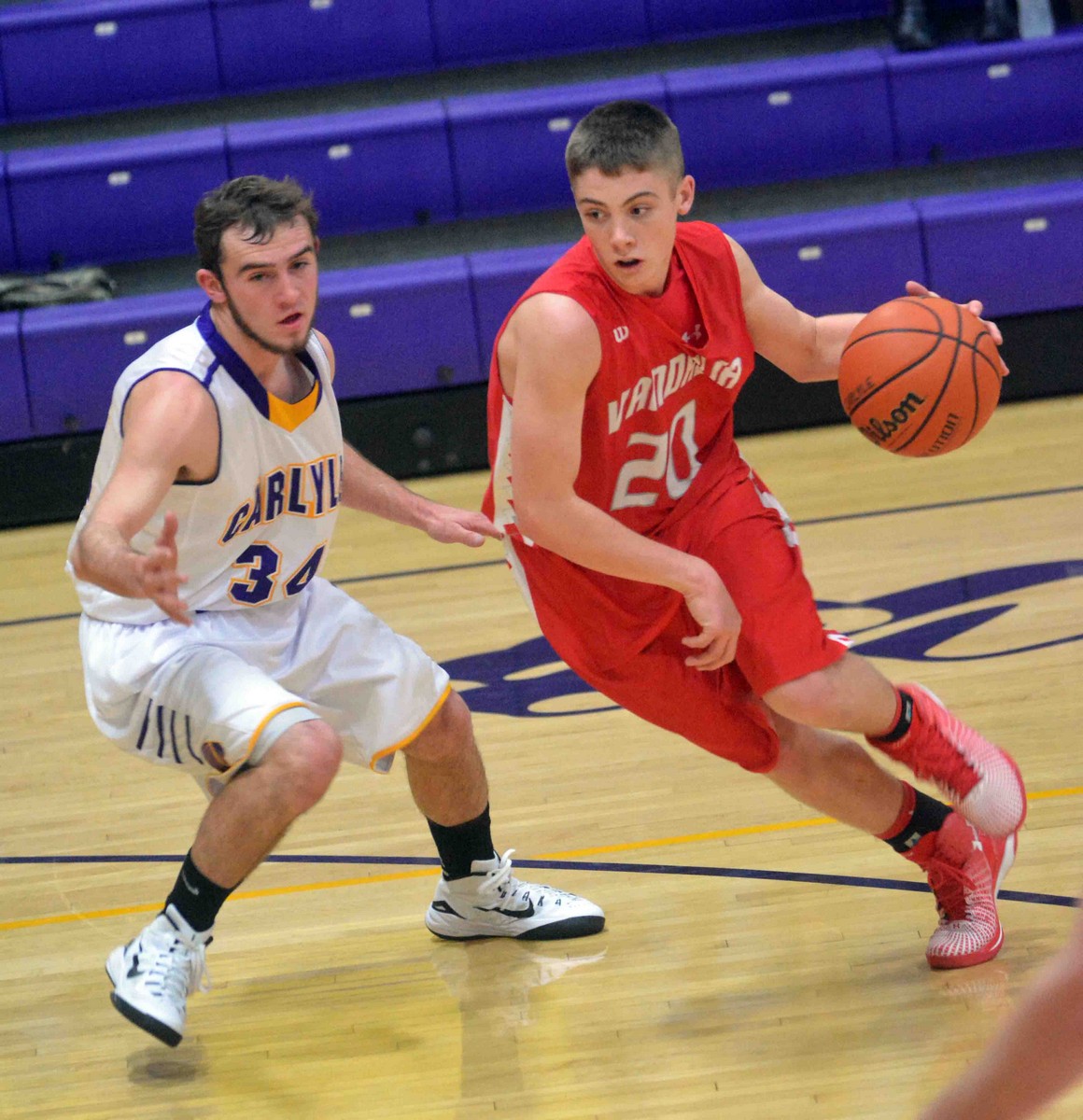 Vandalia’s Richie Well drives to the hoop against Carlye. 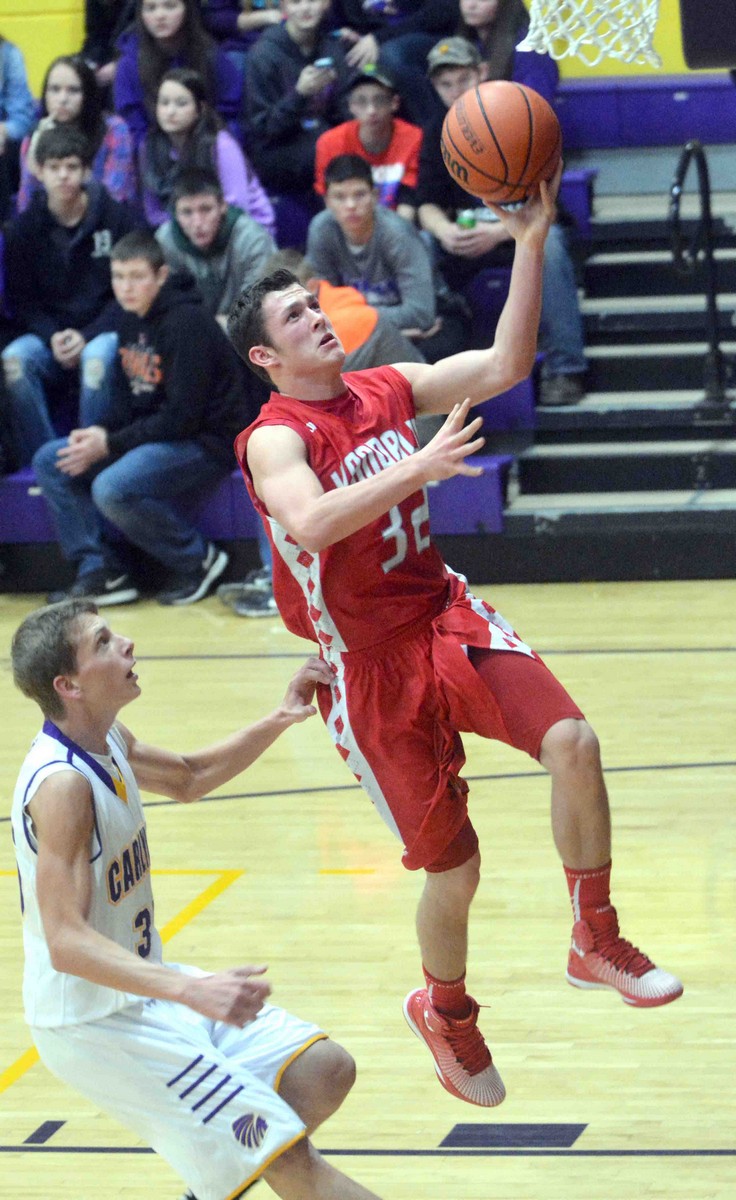 Robby Lott scores for the Vandals.