Facing a 13-point deficit, the Vandalia Lady Vandals didn't quit.
They rallied instead.
But in the end, a solid comeback was not enough, as Hillsboro held on for a 54-45 win over Vandalia on Thursday night in South Central Conference action.
Utilizing a solid inside-outside game, the Hiltoppers had a 13-point lead in the first half. But the host Vandals showed some tenacity, fought back and cut the deficit to one.
While most of the middle part of the contest was close, Hillsboro used two big runs late in the game to pull away for good. The Vandals found themselves down by double figures in the fourth quarter, and the Hiltoppers made enough free throws down the stretch to secure the win.
Vandalia Coach Michelle McNary said she was proud of her team for fighting back from the early double-digit deficit.
"We played hard," McNary said. "It just didn't happen tonight."
As far as the spurt that got her team back into the game, McNary said several factors came into play.
"They missed some shots and we were able to make a few," McNary said. "And Makayla Tinker scored a couple baskets back to back by posting up. That helped a lot. She made some big shots. But then they went to the 1-3-1 and that messed us up a little bit. We quit going to Makayla and that hurt us. Sometimes we don't understand game situations. I thought we should have gone to Makayla more. She had a mismatch a lot tonight."
The Lady Vandals also had an off-night shooting the basketball. Vandalia made just 17 of 53 field goal attempts (32 percent).
"It's hard to win when you shoot like that," McNary said. "We've got to finish better."
McNary noted it hurt that junior Karlie Bright was unavailable, as she's one of the team's best defenders and ball-handlers. At times, Vandalia had three post players in the game at the same time.
Of course, Hillsboro had something to do with Thursday's outcome, too. The Hiltoppers have some height inside and some solid guards. Hillsboro improved to 7-2 with the win.
"They're solid," McNary said of Hillsboro. "I had them in my preseason top four in the conference. And it's not an excuse that we were missing Karlie, because I know they were missing some players tonight, too."
Vandalia fell to 5-4 on the season with the loss.

Game Recap
The game was tied at four when Hillsboro went on a 15-2 run, pulling ahead at 19-6.
Cameron scored 12 points in the first period for the Hiltoppers, while Cooper hit three three-pointers in the frame.
Vandalia got hoops from Tinker and Hosick, and the hosts were down, 21-10, after one quarter.
The Lady Vandals got back into the game with an 11-5 second quarter. The hosts stepped up their defensive intensity in the period, and also took advantage of several Hillsboro turnovers. Tinker was able to get the ball in the low post on several possessions, as well.
Meyer hit a three-pointer, Madison Klanke knocked down a long two-pointer, and then the hosts got a bucket from Tinker, cutting Hillsboro's lead to 22-21.
Those points finished off an 11-1 spurt. But the Hiltoppers scored four-straight points at the end of the second period to take a 26-21 lead into intermission.
Tinker scored five points early in the third period for the Vandals, who cut Hillsboro's lead to 29-28.
But a few defensive breakdowns proved costly for the hosts, as the Hiltoppers went on an 8-2 run to finish off the third quarter. Cooper hit an open trey to start the run. Leah Francis scored inside for the Vandals, who trailed, 35-30, entering the fourth quarter.
After the two teams traded hoops early in the final frame, Hillsboro went on an 8-0 spurt to pull away for good. The visitors were up, 48-34, with just over four minutes to play.
The Lady Vandals were able to cut into the lead, getting it into single digits. But the Hiltoppers took care of the ball and made enough free throws late to secure the win.

Lady Vandal notes
The Lady Vandals played four games in seven days, going 2-2. The team beat Gillespie and Christ Our Rock, but fell to Southwestern and Hillsboro.
The Lady Vandals will be back in action on Thursday night at Pana. The JV game starts at 6 p.m.
Vandalia will meet the Hiltoppers again rather soon, as a road date to Hillsboro is scheduled for Dec. 22.
Thursday's game was the final home date of the 2014 portion of the schedule, as the Lady Vandals won't play at home again until Jan. 10. 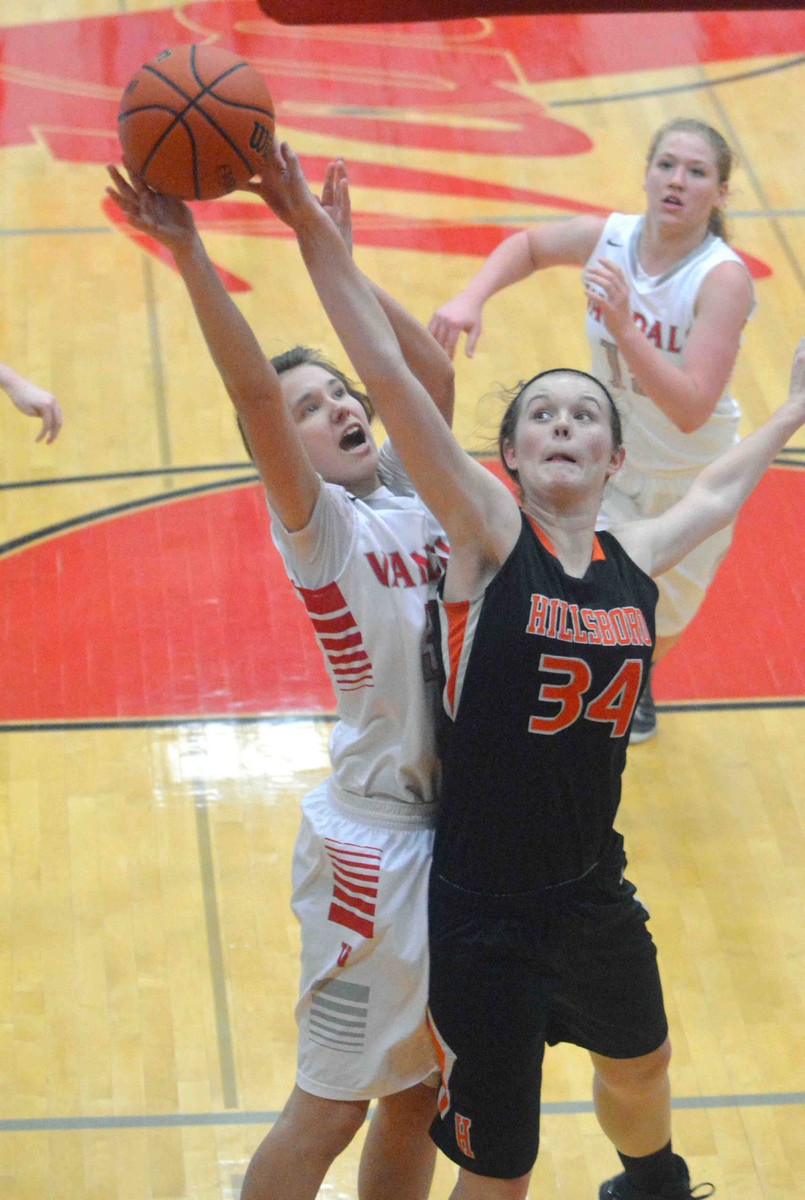 Vandalia’s Madelyn Hosick attempts to score inside against Hillsboro’s Carly Cameron on Thursday. 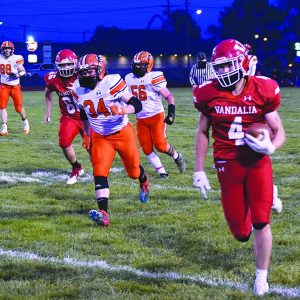