When Jim Green attended the annual Methodist Christmas dinner at Emmanuel Church on Saturday evening, along with others from the Brownstown Methodist Church, he had no idea of the surprise that was in store for him.

Green is a lay speaker and leader for his church, but his ministering and serving others go beyond the church doors and outside his church family, which was recognized at the dinner.
With the other diners present, he enjoyed the bountiful meal and readings, and joined in singing Christmas carols, and was totally unprepared for the  rest of the story, which is directly related to his generous Christian spirit of giving and helping others.
Betty Miller, on behalf of the Brownstown Volunteer Fire Department, and Emmanuel Church, presented him with a license plate attachment that identifies him as chaplain of the fire department.
Following was the presentation of an official Brownstown firefighter sweatshirt bearing the firefighter logo, his name and title of chaplain of the Brownstown Fire Department. Presenting the shirt were firefighters, Tony Thomason, Shelly Thomason, Randy Carpenter and sheriff’s deputy Ted Miller.
The firefighters noted their appreciation for Green’s willingness to respond to assist them as a chaplain, no matter the time or day.
The churches also thanked him for his contributions to the community. 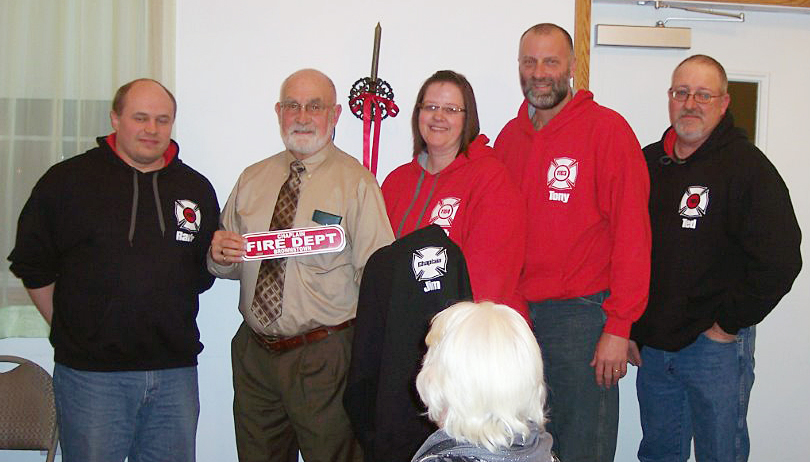 Above, from left, are firefighter Randy Carpenter, Jim Green and firefighters Shelly and Tony Thomason, and Ted Miller, who is also a sheriff’s deputy.