A month after postponing action on a new budget, to allow for last-minute adjustments to the document, the Fayette County Board approved that budget.

And, the board chairman pointed out, figures in that budget will change again in the near future.
During the hearing prior to Tuesday’s regular board meeting, Chairman Steve Knebel said the new budget currently projects a year-end deficit of $22,000.
But, he said, using carryover funds, the year-end total ends up $45,000 in the black.
Knebel told board members that the budget numbers will change somewhat, to the positive, in the coming weeks.
“These are projected numbers,” he said. “These are not actual numbers. “Will they change? Absolutely they will change.”
The budget figures will change, Knebel said, as the county sees the actual numbers for the fiscal year that ended on November 30.
He said that the finance committee, and the board, delayed action on the new budget because of some last-minute issues.
“There were some issues that we had to get worked out,” Knebel said, explaining that one late adjustment was due to changing the food contract for the county jail. That change gave the county up to $3,000 more to work with.
Also, the board learned just prior to the November meeting that two employees in the county clerk’s office had resigned. They agreed at that meeting to replace only one of those employees.
But, Vicky Conder, who took over as county clerk last Monday, pleaded with board members to fill the other vacancy.
“It’s absolutely necessary that we have another person,” Conder said.
“I’m pleading with the board – we need more help,” she said, telling board members that her employees have been working two to four hours extra a day.
Conder asked board members to allow her to hire another employee if she can work it into her allotted budget amount.
The new employee in her office, Latisha Mabry, assisted Conder during Tuesday’s meeting.
During the finance committee report, Knebel announced a change that he hopes will help the board keep better tabs on county spending.
Currently, the board’s three-member committees review their respective bills the night of the meeting and recommend payment of those bills to the full board.
Starting in January, Knebel said, all board members will receive that information prior to the monthly board meetings, as recommended by Assistant State’s Attorney Amanda Ade-Harlow.
“Instead of three people looking over these (bills), we will have 14 looking at them,” Knebel said.
The change, he said, will help help the board “get out of the routine of just looking at things” the night of the meeting.
“It might create ideas on how we can look at things differently,” he said.
The budget for the new fiscal year, as well as the appropriations resolution and tax levy, was approved during the regular meeting.
Also during the regular meeting:
• The new sheriff, Chris Smith, thanked the outgoing sheriff, Aaron Lay, for a smooth transition.
Smith also informed the board that his department, like the Vandalia Police Department, is holding a Shop with a Cop program. His office will be taking donations for the program prior to officers taking some local, less-fortunate children Christmas shopping on Dec. 20.
Smith also told board members that the held a meeting with all deputies, dispatchers and secretaries last week to discuss department operations, goals and expectations.
The sheriff also asked the board’s approval to participate in the Law Enforcement Support Office managed by the U.S. Department of Defense, and that request was OK’d.
Through the program, the sheriff provides to program officials a list of equipment that the department needs, and the county receives that equipment as it becomes available.
Many of the items are available free of charge, while some equipment may require a payment of 10 percent of the equipment’s estimated value.
“There are a lot of things there that we need to take advantage of,” Smith told board members, adding that the county can obtain items for all offices through this program.
Smith also told board members that he has started staggering the shifts of deputies in an attempt to help control overtime hours.
The board approved the continued participation of the sheriff’s office in the Law Enforcement Mutual Aid group and the state’s Law Enforcement Alarm System.
• The board approved the appointment of Troy Pattillo to the CEFS Board of Directors. He takes the spot previously held by board member Joe Kelly, and served on the CEFS Board with board member Jean Finley.
• The board approved the appointment of Conder as the county’s authorized agent for the Illinois Municipal Retirement Fund.
• The board approved the low bid of $295,208 from Perry County Construction of Herrin for the replacement of a bridge over Ash Creek in Ramsey Township, about four miles southeast of Ramsey. 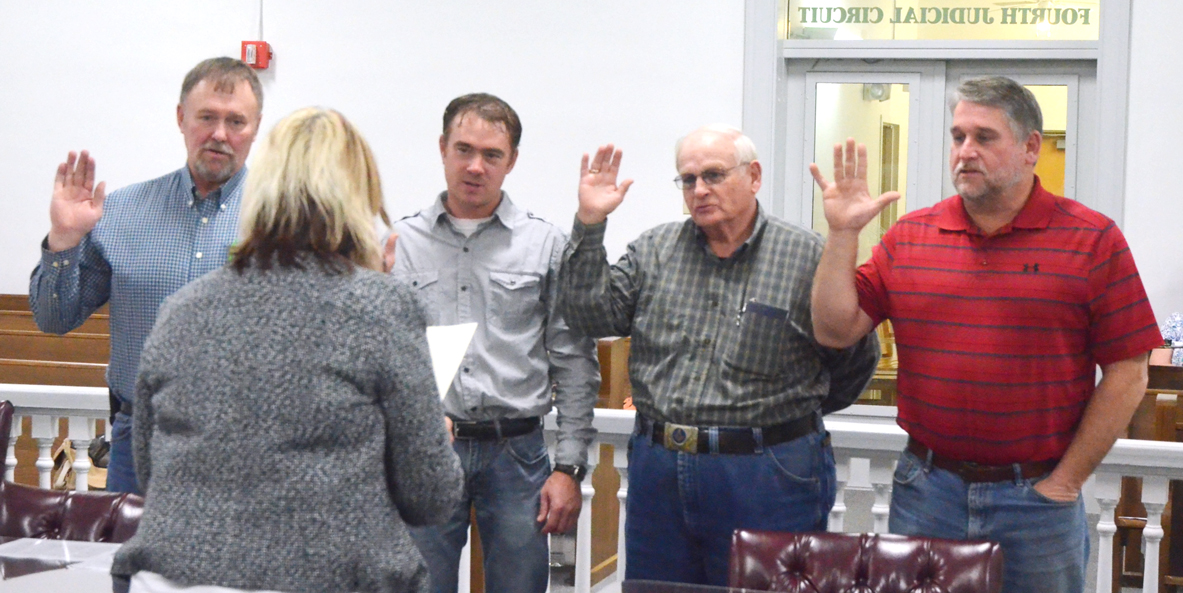 Fayette County Clerk Vicky Conder (back to camera) issues the oath of office for four Fayette County Board members who were re-elected in November. From left to right are Keith Cole, Wade Wilhour, John Blythe and Steve Knebel.