CANTON — Vandalia's first appearance at the Canton Thanksgiving Basketball Tournament ended in disappointment.
The Vandals went 0-3 at the 40th edition of the annual event at Canton's Alice Ingersoll Gymnasium.
Vandalia's boys had their chances in two of the three games, as the team suffered close losses to Delavan and Canton.
The Vandals suffered a 58-48 loss to Delavan on Friday night before dropping two games on Saturday, falling to the hosts and Peoria Manual.

Opener vs. Delavan
The Vandals had a 10-point lead in the first quarter, only to see Delavan pull out a victory with a solid second half in the first game of the round-robin tourney. The effort was there, but the final result was not.
"Anytime you lose, you're disappointed," Vandalia Coach Brian Buscher said.  "But I'm not disappointed in how we played. I know we'll get better."
The Vandals raced out to a double-digit lead.
"I'm proud of the way our guys came out," Buscher said. "It was a great start. I thought we came out hard."
Overall, the Vandals played solid defense all night, Buscher said.

At the same time, Delavan's talented guards scored at will.
"We did a good job of guarding all night," Buscher said. "We knew they were going to drive and kick. They hit some shots. We knew their guards were good, but I thought we did a pretty good job of guarding them."
Turnovers and empty possessions proved costly for Vandalia.
"I thought the difference in the game was us not handling pressure at key times," Buscher said. "If we handle their pressure, we keep the lead and maybe even extend the lead. We didn't handle pressure well at times. You have to be able to handle the pressure."

Game Recap
The Vandals got off to a great start, moving the ball well and knocking down shots.
Nestleroad and Casey had hoops, and then Well hit a three-pointer. After Well made two free throws, Vandalia had an 11-4 lead. Casey then converted an old-fashioned three-point play, making it 14-4.
But Delavan then scored eight-straight points, taking advantage of a couple of Vandalia turnovers.
Lott scored inside for the Vandals, but Delavan's Justin Sieh hit a three-pointer, tying the game, 16-16, at the end of the first quarter.
The second quarter was back and forth all the way, as neither team could pull away.
Vandalia got hoops from Dokey and Durbin early in the quarter, while Well's three-pointer tied the game at 23. Free throws from Dokey pushed Vandalia in front, 25-23, at the half.
Delavan outscored Vandalia, 16-10, in the third period to take the lead.
The Vandals had a five-point lead, but the Panthers went on a 7-0 run. A trey from Casey tied the game, and a three-pointer from Well later cut Delavan's lead to one, 36-35.
Arrenholz of Delavan scored the final three points of the period, and the Panthers held a 39-35 lead entering the fourth quarter.
The Panthers got going early in the final frame, taking a 49-40 lead with four minutes to play. Long hit two three-pointers during the stretch.
A minute later, the Vandals found themselves down 54-42, and time was running out.
A couple of Vandalia turnovers proved costly, and the Panthers extended their lead on the other end. Vandalia simply could not get enough defensive stops late in the game, as the Panthers guards proved tough to stop.
The two teams traded free throws over the last two minutes for the final margin.

Hosts top Vandals
The Vandals once again gave a solid effort, but they just couldn't get over the hump against the host Little Giants on Saturday afternoon.
The Vandals had their chances, but Canton pulled away late for a 60-51 win.
Casey scored 20 points to lead the way for the Vandals. A freshman forward, Casey had a huge first-quarter for the Vandals, scoring his team's first 12 points.
But Canton took a 16-12 lead into the second quarter.
Casey picked up his third foul in the second period, and had to go to the bench.
The Little Giants took a 21-15 lead, but Well hit three foul shots and then Dokey nailed a three-pointer to tie the game at 21.
Durbin hit a three, and Dokey scored inside, but Canton took a 29-27 lead into halftime.
Canton then took a seven-point lead, as the Vandals suffered through a cold spell.
Dokey hit a three-pointer at the end of the third quarter, cutting Canton's lead to 42-38.
The Vandals struggled offensively in the final frame, and Canton kept its lead around six to eight points.
Durbin hit a three-pointer to cut Canton's lead to three with 3:45 to play. But the Little Giants responded back, taking a 11-point lead with a quick spurt.
Casey hit consecutive three-pointers for the Vandals with about a minute to go to make it a two-possession game.
But Vandalia then had to foul, and the hosts made enough free throws down the stretch to secure the win.
Brock Vogel scored 20 points to lead Canton.

Manual too much
Peoria Manual handled Vandalia, 80-27, on Saturday night at the tourney.
The Rams led, 50-10, at the half.
Going 3-0, Manual won the tourney for the fifth-straight year.
With an intense pressure defense, Manual forced the Vandals into 24 turnovers. On the other hand, the Rams turned the ball over just three times.
Romon Douglas-Watkins scored 24 points for the Rams and DaMonte Williams added 16.
Vandalia fell to 0-4 on the season with Saturday's losses. The team will be back in action on Friday, Dec. 12, against Gillespie.
Notes: Delavan finished second at the tourney by beating the hosts, 49-45, on Saturday night. Arrenholz scored 19 for Delavan (2-1). Brock Vogel scored 20 points for the Little Giants (1-2). 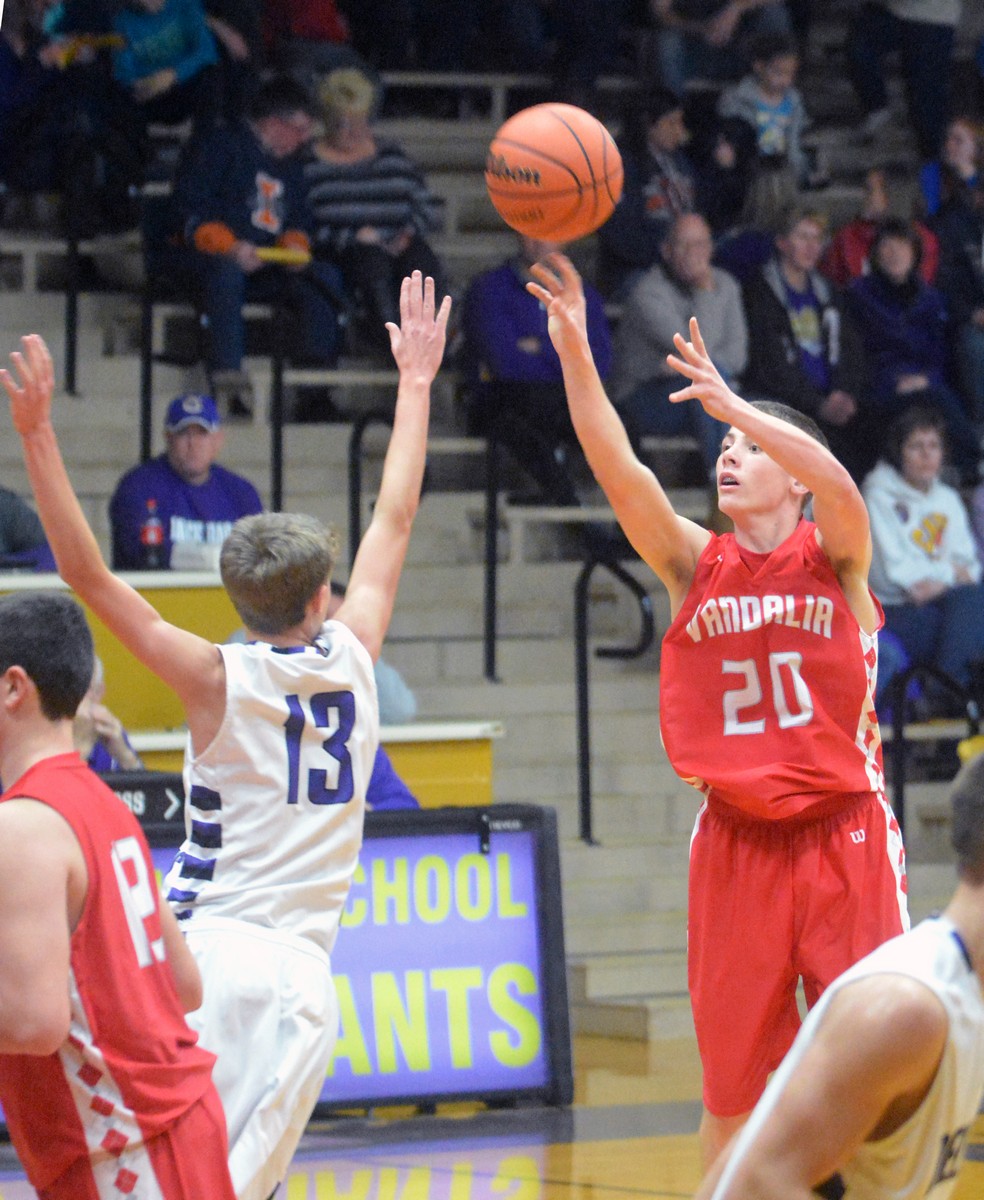 Richie Well shoots a jumper for the Vandals at the Canton Tournament.