Peggy Schulze  has always been interested in photography,“even as a kid,” and once studied under a professional photographer who was an understudy for world-renown photographer Ansel Adams.

She now has her own studio in her home in rural Vandalia, near the Shrine Club, with numerous background scenes, settings and props, and the technique, creativity, imagination and talent to produce beautiful portraits and works of art, but in a young and modern style.
She offers various packets to choose from, ones to fit individual needs.
She seems to have a special gift for photographing babies and children, for their facial expressions and eyes seem to talk to the viewer.
A Little Background
Peggy remembers her first camera was a Cannon TX.  She was always interested in photography.
“In the early 1970s, I had the great opportunity to study black and white photography printing methods in Champaign,” she said. “I studied under William Morrow at Giessman Studio. Mr. Morrow studied under Ansel Adams, the great American photographer.”
And the Story Develops
“I have always held this training and awesome contact to Ansel Adams as my special claim to fame,” she said, laughing.
“I did everything from sweep the floor to standing in the darkroom for hours making a print.
"Those were the days when you put your paper into a chemical, than the developer, then stand there and watch it develop, then go through like four trays, in different chemicals, then you would take it out and look at it in the light.
“And if something was wrong with it, then you would start all over again. I could spend hours to get the perfect print,” she said. Then she woukd hang it up in the pitch-black room.
“I was so into it and I wanted to learn, and I did learn a lot.”
She has come a long way from the Cannon TX. “I love the digital camera now,” she said. “I would never want to use film again.”
She also took classes at Parkland College in Champaign, where earned a communications degree.
Moving On … with Husband Gary
“While I was in Champaign, I met Gary, my husband,” she said. He was teaching at the U of I.
“We moved to Colorado from there and lived there for seven years. Then we moved here in the early 90’s and I got a job right away with the newspaper,” she said.
Family
Gary, is also interested in photography and is an accomplished photographer himself, thus, Peggy said, he is a great help to her in her home studio. Gary teaches electronics at VHS.
They have three children, all grown and married: Meghan has a degree in  journalism; Nicholas is the band director at centennial High School in Champaign, and Michael is a nurse at Hillsboro Area Hospital.
Stepping from the Newspaper World to a New Venture
Peggy formerly worked at The Leader-Union, 15 years in advertising, 20 years altogether.
“Now that I have raised my family, and have had a great career in the advertising world, I am returning to my roots and love for photography,” she shared.
Peggy Schulze Photography Developed …
… and is developing very well.  She focuses on the individuals to create the right picture for them. She has two very capable and creative assistants, Jenni Boyd and Caitlyn Campbell.
Have Camera, Will Travel
While Peggy and her husband, Gary’s home is surrounded by the beauty of nature, the perfect background for outdoors photographs so in demand now, she will also travel to other locations, such as the recent trip to a cow pasture to photograph a dairy farmer’s cows or a walk through a pasture the next day to photograph a proud owner’s beautiful horses.
She is also good with pets, as several local townspeople have discovered. Those pictures can often be seen in downtown Vandalia merchants’ places of  businesses. Words, Wicks and Wood Book Store displays several on Peggy’s works of pet art.
Peggy’s Logo …
… and/or slogan, is much like her pleasant and friendly personality – “Fun, Artful and Creative,” in a young and modern style.
Her website is peggyschulzephotography.com 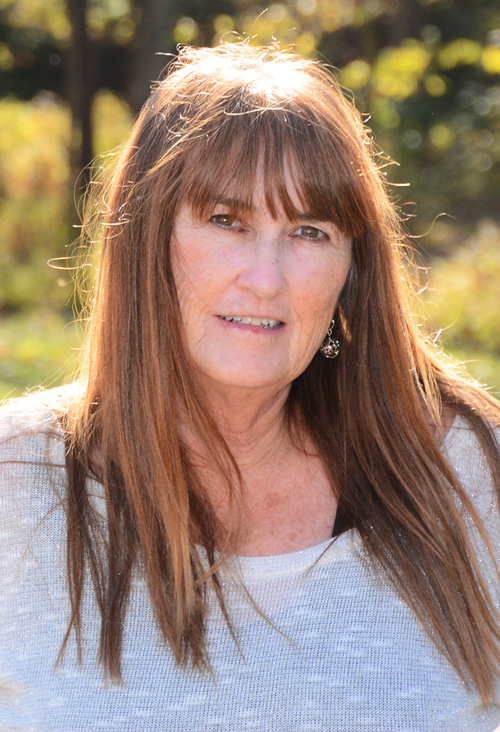