MULBERRY GROVE — The season couldn't have started any better for the Ramsey Rams.
The Rams stunned Patoka, 56-54, last Monday in a first round game of the 2014 Mulberry Grove Turkey Tournament, surprising the field in the process with a solid season-opening victory.
"This is the best start to a season we've had since I've been here," Ramsey Coach Rodney Hunt said. "This is a great win. Any win over Patoka is great. They've had our number for a long time. I have a lot of respect for their program. It's a good win for us."
Hunt said it was a total team effort.
"It was a team win," he said. "We had nine players get in there and all of them contributed. They all did their job. It got a little erratic at the end, but they did well getting to that point."
For the Warriors, a furious comeback fell just short, as turnovers and missed free throws were too much to overcome.
Patoka Coach Joey Eddy said he'd rather see his team suffer a loss like this early in the season instead of at the end of the season.
"We didn't give up, and that's the big thing," Eddy said. "We're a young team, and we know there's going to be some growing pains. It's not the best way to start a season, but we'd rather do it now than later. We lost our first game last year and won a regional championship. It's not the worse thing in the world if you learn from it."
Eddy also credited Ramsey.
"They played well as a team," Eddy said. "They made the extra pass and got some easy shots. We were taking tough shots."
Game Stats
Senior post player Michael Camez scored 17 points to lead Ramsey. Michael Lay added nine points, while Brady Reiss and Kyle Adermann added eight points apiece. Senior point guard Carter Hunt scored six while running the offense.
Ramsey hit six three-pointers in the game, with five coming in the first half. Four different players connected from long distance — Hunt, Lay, Reiss and Adermann.
"That's what we needed," Coach Hunt said. "I was concerned where our offense was going to come from. And the boys stepped up and shot the ball well."
Sophomore standout Jered Cain led Patoka with 18 points, while Dylan Back added 13 points and Garrett Belcher chipped in 10 points for the Warriors.
Free throw shooting was a factor in the outcome. Patoka made only 14 of 26 foul shots, missing 12 at the charity stripe in a two-point loss.
"I don't think we'll shoot that bad again," Eddy said.
Ramsey made nine of 14 at the foul line.
Game Recap
The game was tied, 9-9, in the first period. Ramsey then got back-to-back three-pointers from Hunt and Kyle Adermann to pull ahead. A putback inside by Tyler Back cut the deficit to 15-11 by the end of the first period.
The Rams used a 7-2 run to start the second quarter, as a trey from Lay pushed Ramsey in front, 22-13 with 4:18 left in the period.
Patoka stayed close, as Jered Cain scored five-straight points.
By the end of the first half, Ramsey held a 29-22 lead.
The Rams continued to knock down shots from the perimeter in the third period. Three-pointers from Kyle Adermann and Reiss pushed the Rams in front, 37-26.
The Ramsey lead was 39-29 entering the fourth quarter.
Patoka definitely didn't go down without a fight. In fact, the Warriors erupted for 25 points in the final frame.
Ramsey had a comfortable 51-35 lead with four minutes to play. The Warriors scored nine-straight points, After Ramsey stopped the run, Patoka's Dylan Back drained a three-pointer, making it 53-47 with only 55 seconds to play.
Ramsey turned the ball over against a full-court press, and Patoka's Jered Cain scored in the lane, cutting his team's deficit to four, 53-49. Ramsey turned the ball over again, but Patoka missed a three-pointer and then had to foul.
Ramsey's Reiss hit one of two foul shots. On the miss, Camez grabbed the rebound and drew a foul. He made one of two at the line for a 55-49 cushion.
Patoka's Belcher hit a three-pointer with seven seconds left, but Ramsey was able to get the ball inbounds and draw a foul. One free throw from Hunt made it 56-52. Patoka's Michael Organ made an uncontested layup just before the buzzer for the final score. 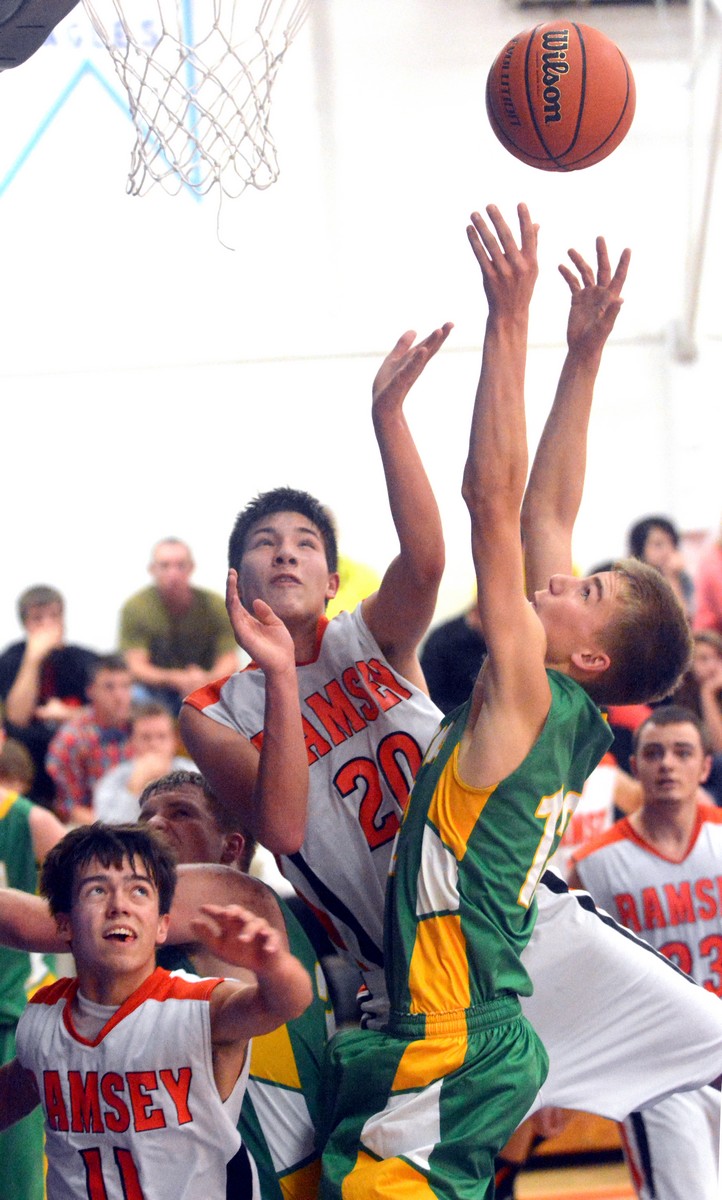