Hannah Blythe won't soon forget the 2014 tennis season.
Neither will her father.
A Vandalia High School junior, Blythe just completed a stellar 2014 campaign.
It was one that saw Blythe go week-after-week and month-after-month without suffering a loss, as the Lady Vandal standout went undefeated until the state finals.
"I accomplished all of my goals before I got to Chicago," Hannah said. "That was exactly what I wanted to do."
And it was a season she shared with her father Bill, who just completed his first season as the program's head coach.

A stellar season
Blythe went undefeated in singles play throughout the regular season and she didn't suffer a loss until the state finals.
She finished her stellar season with an impressive record of 23-2 in singles action.
Simply put, Blythe cruised through the regular season until running into some tough competition at the 2014 IHSA State Tennis Tournament, which was held Oct. 23-25 at several locations in the Chicago area.

"I did really good until I went to Chicago," Hannah said. "I got a lot better over the summer, so the season went a lot better for me than the year before."
Bill said his daughter worked extremely hard with the fall season in mind.
"She works at it all year-round," Bill said. "She works hard and she was a lot better this year compared to last year."
So what makes Hannah such a solid player?
"Her forehand and backhand are both pretty good," Bill said. "And she has something that a lot of girls don't have in a backhand down-the-line shot. It's real effective. Her serve is consistent, but not over-powering. She doesn't double-fault very often."
The season was definitely one to remember for Blythe.
After rolling through the competition during the regular season, Blythe won the South Central Conference title in singles, beating Abbey Gaffner of Greenville in the title match.
It was Blythe's second-straight conference championship. The win pushed Blythe's record to 19-0.
Next, Blythe won the singles title at the Effingham Sectional, knocking off Kaitlin Deters of Teutopolis, 6-3, 7-6 (3).
Blythe advanced to state with a record of 23-0.
"Anytime you can go undefeated that long, it means you're keeping up with some quality play," Coach Blythe said.
At state, Belleville West's Kaylie Comley defeated Blythe, 6-2, 6-0 in the first round at state.
"The match was the longest of all the first-round matches," Bill said. "It was full of long rallies, with Hannah coming up on the wrong end of too many."
In the consolation bracket, Tinley Park's Haley Wilcox topped Blythe, 6-0, 6-1.
The season ended with the loss.
"It was disappointing," Hannah said of her state experience. "There was good competition, but I played really bad at state. I think I was too nervous."
Her father had a similar assessment.
"It was a disappointing tournament for Hannah," Bill said.
"She just couldn't get her best game going. After the first match, I think there was still some frustration and that may have carried over to the second match."
Blythe also played some doubles with Emma Meyer, and the duo went 12-1 on the season.

Looking back
As a sophomore, Blythe won 20 matches, earned the conference singles crown and advanced to the state tournament.
She lost just two regular-season matches that year — once to Effingham's top player and once at the Centralia Invitational.
Blythe dropped one match at the sectional, and won her first match at the state event before dropping her final two matches of the season.
She ended her sophomore year with a record of 20-5.
The daughter of Bill and Wendy Blythe, Hannah went 6-10 in singles action as a freshman, her first season of competitive tennis.
She first started playing tournaments the summer before her freshman year.

Looking ahead
With the season just days behind her, Blythe was back on the school's tennis courts last week, working on her game with her father.
Hannah doesn't participate in any other sports. Tennis is her "thing."
"I just enjoy playing tennis," she said. "I enjoy the hitting, I enjoy playing well, all of it."
Hannah has the goals set high for her senior season. Earning yet another conference and sectional title will be among her goals. And a better showing at state is on the list, too.
"I want to win at least win a couple matches up at state next year," Blythe said.
She's already thinking about that goal now.
Despite a little rain Thursday, Bill and Hannah were working on her game at the tennis courts behind the elementary school.
"She needs to develop more power on her ground strokes and her serve," Bill said. "That's the main thing. And she can improve in the mental game."

First-year coach
Bill Blythe just completed his first season as the head coach of the Lady Vandals.
"It was a little different," Bill said. "I wasn't able to watch Hannah as much as I used to. But it was very interesting coaching the girls this year. I enjoyed it and I'd like to do it again next year. I learned a lot."
Of course, Bill has always been Hannah's coach, but this was the first time he was in charge of the high school's program.
Hannah said there was an adjustment for her, as it was a bit different that her father wasn't able to watch every point of every one of her matches.
They both admitted it was an enjoyable experience overall.
And one thing's for sure — the 2014 tennis season is one the Blythes won't soon forget. 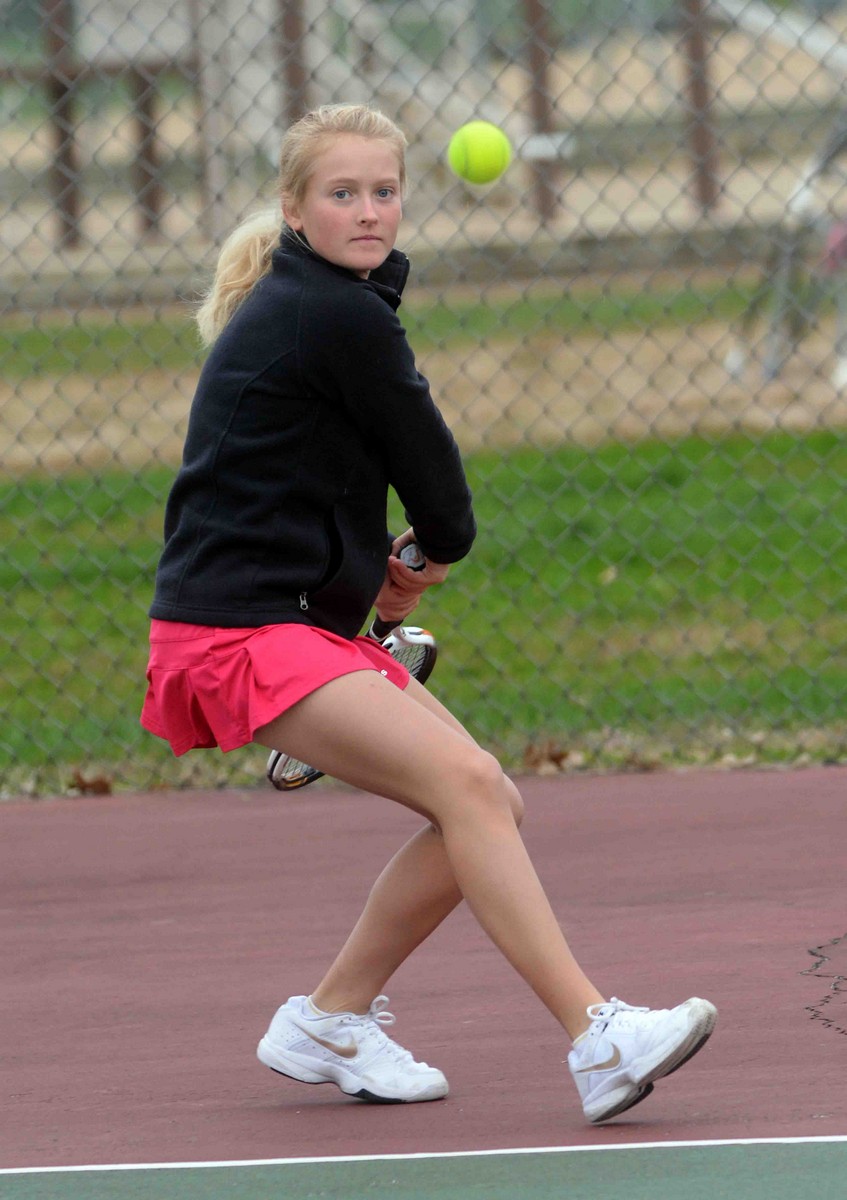