The investigation into last week’s accident in downtown Vandalia that resulted in the deaths of four members of a Greenville family is now in the hands of the Illinois State Police.

Meanwhile, efforts to aid the family of the wreck victims are under way.
Vandalia Police Chief Jeff Ray said on Monday that his department has completed its part of the investigation, which included providing to state police names of potential witnesses.
That accident occurred at the Sixth Street crossing about 15 minutes before the start of the Vandalia Lions Club’s Halloween parade a block south of that crossing.
According to the Illinois State Police, a Chrysler Pacifica driven by Crystal Anna, 35, was traveling south across the tracks at Main Street when it was struck by an eastbound CSX Transportation train at about 6:48 p.m.
Three children in that vehicle – 10-year-old Abby Wisnasky, 13-year-old Drake Wisnasky and 18-year-old Alyssa Sewell – were pronounced dead at the scene by Fayette County Coroner Bruce Bowen, and Anna, their mother, died on Saturday afternoon at a St. Louis hospital.
Anna was airlifted to St. Louis, as was another one of her children riding in the vehicle, 9-year-old Dylan Wisnasky, who was expected to be released from the hospital this week, according to information provided indirectly by the father.
In addition to Vandalia Police and Bowen, those responding to the scene were the state police, including accident reconstructionists; Fayette County Sheriff’s Office; Fayette County Hospital Ambulance; and Altamont Area Ambulance.
Ray said on Monday that he had viewed footage from the on-train camera with CSX police and the state police.
Ray said that a CSX police officer told him that the speed limit for trains traveling through Vandalia is 50 mph, and that the train was traveling 49 mph prior to the accident.
He said that it appeared to him that the vehicle was “moving forward … at a regular rate of speed” just prior to the accident.
Ray said he believes that the crossing gate on the north side of Sixth Street may have lowered after the vehicle passed that spot – and that she had not driven around the gate – and that Anna “might have been confused” about what to do as the train approached.
The vehicle came to rest up against one of the concrete barricades east of the sidewalk on the east side of Sixth Street. Those barricades, along with ones west of the sidewalk on Fifth Street, were installed after a train-car accident on Fifth Street several years ago. 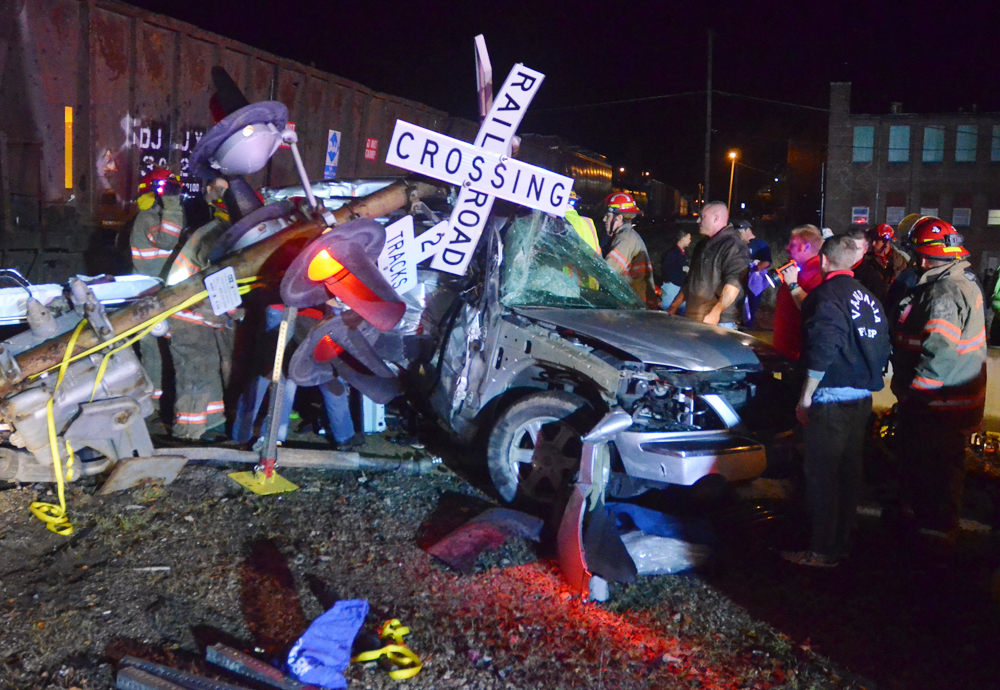 Local police and firefighters respond to the car-train accident last Thursday that claimed the lives of four members of a Greenville family.