Defeated by someone from Teutopolis in last year’s finals, Blythe fought to prevent that from happening a second time in winning the singles at the sectional meet in Effingham.
Blythe defeated T-Town junior Kaitlyn Dieters in the first set, 6-3, then battled hard to edge Dieters in a tie-breaker second set, 7-6.
She now advances to the state finals in Chicago, a year after making her inaugural appearance. Blythe won her first match at state last year before falling in her next two matches.
Dieters’ trek to the singles finals started with a victory over Vandalia’s No. 2 player, Emma Meyer, 6-0, 6-1.
In doubles play, the team of sisters Gabby and Kiersten Dossett had a tough loss, drawing the top-seeded team of Schutzback and Renfrow from Effingham St. Anthony. The Vandals doubles squad lost 6-1, 6-0.
Seniors Nicole Wells and Courtney Ulmer had the biggest battle of the day in their first-round match with Effingham’s Simms and Wortman, a feed-in match to the round of 16 doubles.
The Lady Vandals duo won the first set in a tie-breaker, lost the second set in a tie-breaker and then came up short in the third set, 6-4.
“It was a great effort from these two seniors,” Vandals coach Bill Blythe said. 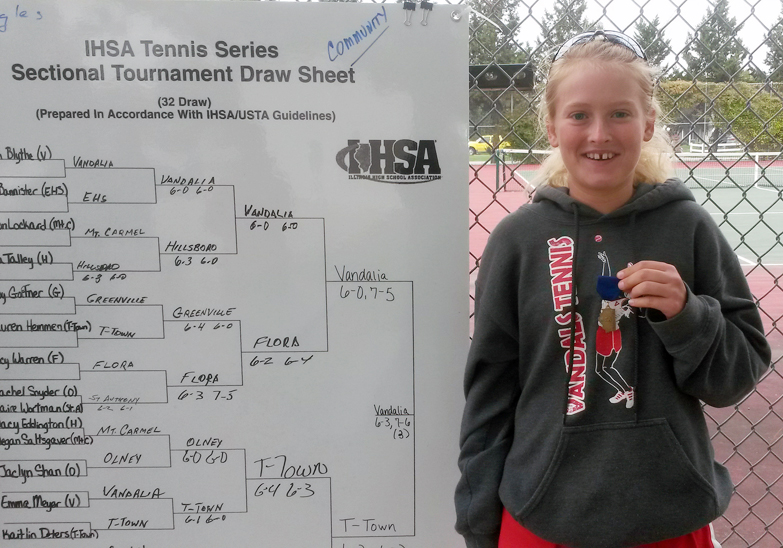 Vandalia’s Hannah Blythe earned a second trip to the state tennis finals by winning the sectional singles on Saturday.