Three failed attempts in the last 28 seconds of the game left the Vandals with only one chance, and 16 seconds, to come up with a winning score.

Collin Nestleroad and Marcus Zimmerman were up to the task.
Perched on the Vandals’ 8-yard line, with two Hillsboro defensive linemen closing in on him, Nestleroad heaved a pass in Zimmerman’s direction.
Zimmerman took it from there, hauling in the Hail Mary pass and outrunning Hiltopper defenders for the winning score.
With the 38-35 win, the Vandals improved to 4-2, keeping their hopes alive for postseason play.
The Vandals held a 32-27 lead with two minutes left in the game when Hillsboro scored on a 66-yard pass play.
Nestleroad was still confident that the Vandals could come back from that deficit, but their chances were lessened when Hillsboro intercepted a pass and worked to run down the clock.
But a tough defensive stand by Vandalia forced the Hiltoppers to punt. Starting from their 15-yard line, the Vandals had 44 seconds to score.
Their plan was to have Nestleroad “just throw it deep and see if someone could make a play,” the quarterback said.
A sack sandwiched by two incompletions left Vandalia with just one play.
“I knew where he (Zimmerman) would be, and I just threw it as far as I could, and hopefully he could catch it,” Nestleroad said.
A little more than 40 yards away, the freshman saw the pass coming his way.
Zimmerman knew what he had to do – “just catch it and try to keep chopping my feet and score.”
Once he made the catch with a defender on top of him, Zimmerman “knew I was going to have to make a move to get past the defenders.
“I just did my best,” he said.
Coach John Stout felt that Nestleroad and Zimmerman would take a good shot at the end.
“Collin knows Marcus – if (the pass) is close, he (Zimmerman) has got a chance,” Stout said.
“What a great play … and he’s a freshman,” Stout said, talking about Zimmerman’s jaunt to complete the 85-yard scoring play.
That score was one of Zimmerman’s three touchdowns, the others coming on 17-yard and 23-yard pass plays. Bobby Bradley had the Vandals’ other three touchdowns, on runs of 39, 46 and 20 yards.
The Vandals scored twice in the first half, but were down 27-12 at halftime. In the locker room, they made some defensive adjustments to stop Hillsboro’s run game.
They worked.
Stout and defensive coach Jason Clay worked out a plan designed to halt the success of quarterback runs around end on option plays.
“We put a spy on the quarterback, and Kelly Jones did a great job of stopping that,” Stout said.
“And we moved Collin off the corner. He’s pretty crafty about getting off a block, and he made some nice plays over there at corner,” he said.
Had the Vandals not scored on the final play, Stout still would have been impressed with his team’s effort.
“I told the kids out there (in the postgame huddle) that I was proud of them before the last 20 seconds, just the way they responded in the second half.
“Even if we got beat by that pass (Hillsboro’s last score), I was still proud of them, but, gosh, I’m extra proud of them now, not giving up,” Stout said.
Nestleroad completed six of 18 pass attempts for 151 yards, and Zimmerman led receivers with 125 yards on three receptions, all touchdowns.
Codie Jackson, Bradley and Durbin each had one catch for the Vandals.
Bradley carried the ball 22 times in gaining 184 yards. Bobby Moore had 52 yards on five carries, Nestleroad ran for 32 yards on 12 carries and Blake Hankins had 11 yards on four carries.
The Vandals piled up 430 yards on offense, 279 on the ground and 151 through the air. 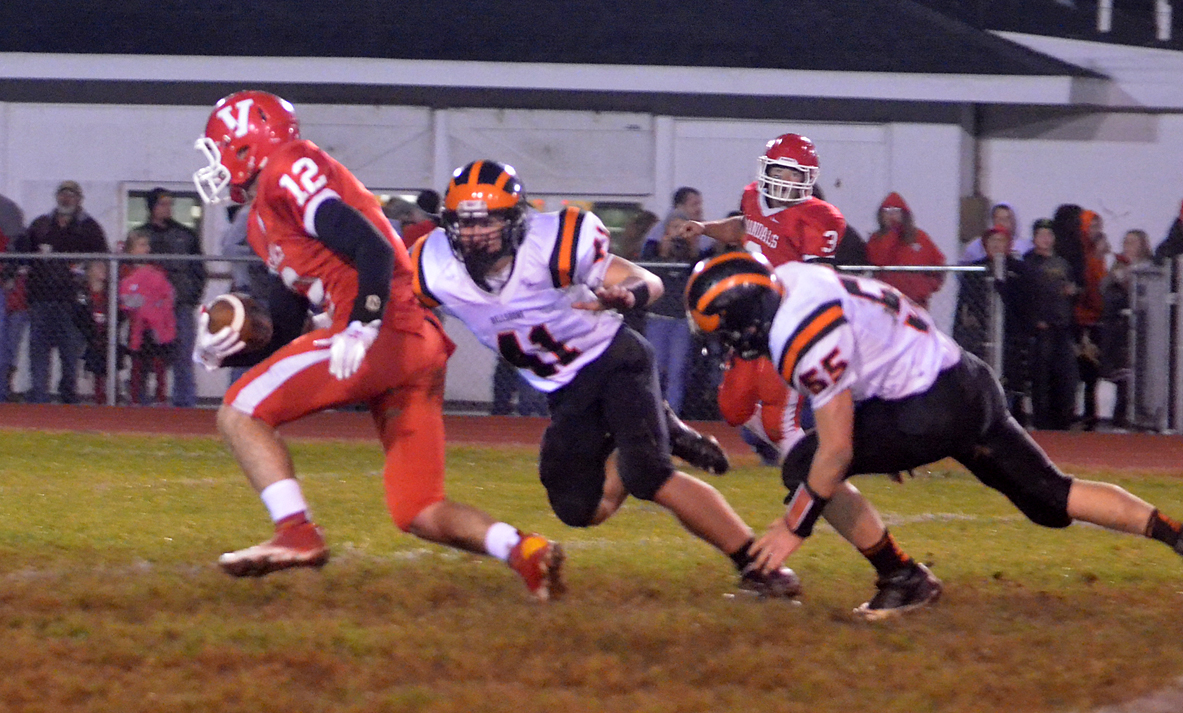 Photos by Rich Bauer Codie Jackson outruns Hillsboro defenders for a 17-yard gain in the first half of Friday’s win. 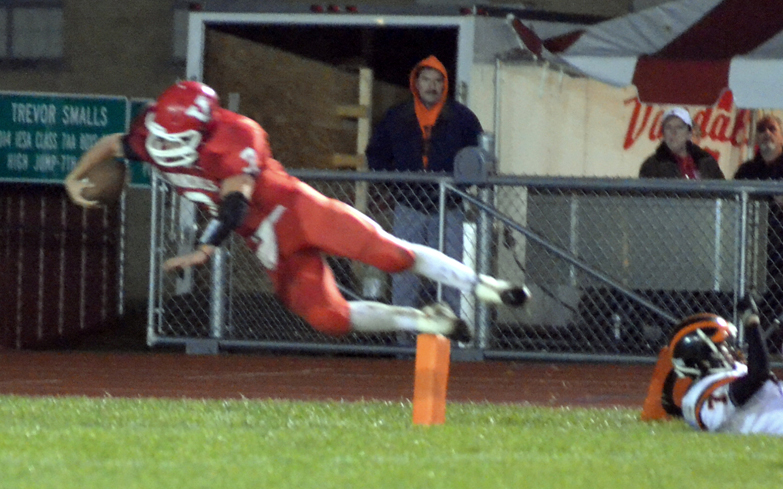 Bobby Bradley dives into the end zone for the Vandals’ first score on Friday night in the 38-35 win. 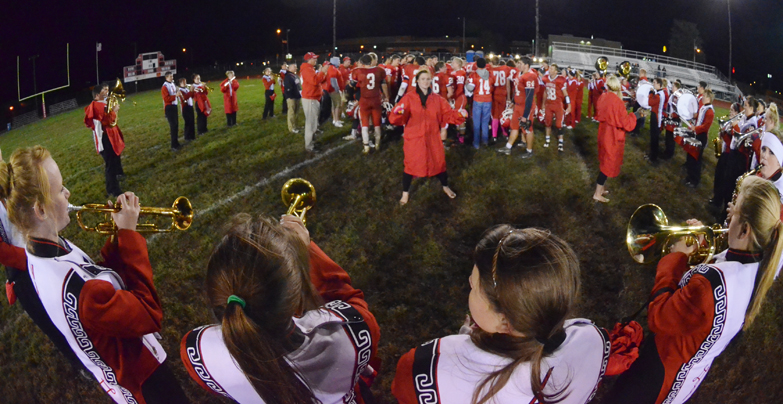