The Vandals kept their hopes for postseason play alive with a homecoming win over Litchfield on Friday, but did so after fighting off a strong comeback effort by the Purple Panthers.

Vandalia walked away with a 50-48 double-overtime win when quarterback Collin Nestleroad scrambled his way around Litchfield defenders on a two-point conversion in the second overtime.
“We’ll take it – a win’s a win,” coach John Stout said after Friday’s win.
“We gave up 48 (points), but we put 50 points on the board,” he said. “No matter how you win, as long as you win, it’s happy.”
The Vandals jumped out to 16-0 and 30-8 leads in the first half, but found themselves in a dogfight for the rest of the contest.
After Dillan Tate scored on a 1-yard fun and Nestleroad passed to Kelly Jones for the two-point conversion, the Vandals recorded a quick second score after Bobby Bradley recovered a Litchfield fumble.
Bobby Moore scored from 2 yards out, and Nestleroad made the two-point conversion.
After Litchfield recorded their first touchdown, the Vandals added a 2-yard run by Bradley and a 50-yard touchdown strike from Nestleroad to go up 30-8.
Litchfield scored twice before the half to narrow the gap to 30-20, and added another score in the third quarter to get within two.
After a 2-yard touchdown by Nestleroad, a Purple Panthers touchdown at the end of regulation knotted the score at 36.
Nestleroad scored from 10 yards out in the first overtime, but Litchfield responded with a score of its own, with both teams unable to convert their extra-point attempts.
Litchfield then scored in the second overtime, and decided to try for an extra-point kick. But the attempt got only inches off the ground before being blocked by onrushing Vandals.
Bradley tied the score at 48 with a 10-yard run in the second OT, then Nestleroad gave the Vandals the win with his two-point scramble.
Stout gave Litchfield quarterback Ryan Howard a lot of credit for keeping his team in the game with both his legs and his arm after the Vandals jumped out to a sizeable lead.
“That Howard kid is really good,” Stout said. “He just kept making plays.
“We had him bottled up, and he just kept finding people open,” he said. “Part of that was just staying alive and us having to cover (receivers) for so long.
“We had some coverage breakdowns, but a lot of it was him just staying alive (by scrambling),” Stout said.
As Litchfield staged its comeback, the Vandals had a chance to seal the win with a score, but failed to convert.
With 11:50 left in the fourth quarter, the Litchfield punter inadvertently downed the ball when reaching for a low snap, giving the Vandals the ball deep in Purple Panther territory.
After Bradley carried the ball down to the Litchfield 6-yard line, a bad snap moved the ball back to the 10.
The Vandals advanced the ball down to the 1-yard line on third down, but a fourth-down sack on the 6-yard line gave Litchfield the ball.
Nestleroad led the Vandals in rushing with 146 yards on 21 carries. Bradley had 101 yards on 14 carries and two TD’s, and Moore had 19 yards on nine carries. Zimmerman carried once for 4 yards, and Tate had one carry, a 1-yard touchdown.
Nestleroad was 4 for 9 in passing for 101 yards, 50 of those coming on his TD pass to Zimmerman.
Zimmerman pulled in three passes for 93 yards, and Marcus Durbin had an 8-yard reception.
The Vandals, 3-2 on the season, stay at home this Friday, hosting Hillsboro. 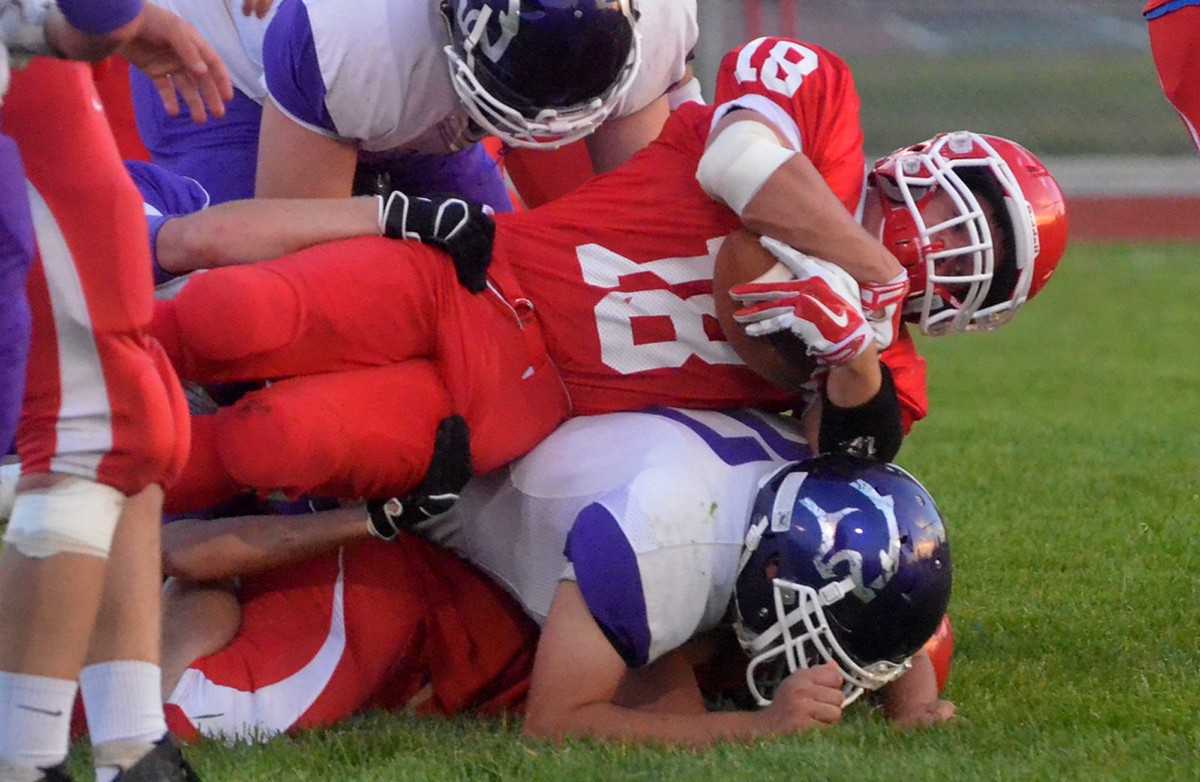 Vandalia’s Bobby Moore lunges over the goal line from 2 yards out to give the Vandals a 14-0 lead in the first quarter on Friday. Quarterback Collin Nestleroad added the two-point conversion for a 16-0 lead. 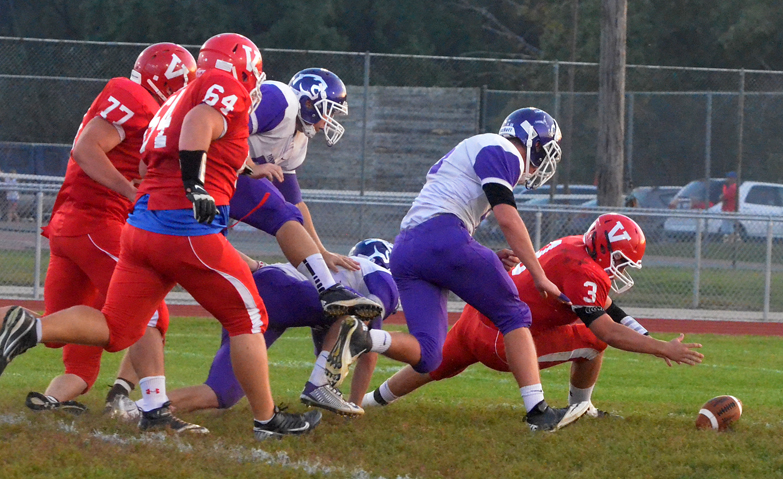 Bobby Bradley pounces on a Litchfield fumble in the first quarter of Friday’s game. The fumble led to the Vandals’ second score.