By Charlene M. Jett
My vocabulary isn’t large enough to describe the fantastic, awesome meeting we had today. It was really great! In case you didn’t make the meeting, let me describe it for you.

It started with Donna Smith playing very sweet music and me trying to sing with her. This was spontaneous and anyone who wanted  could join and sing with us – there was only one brave soul. However when our entertainers – Judy Varga and Randy Schukar – took over, it was a whole different deal! Joyful chaos returned, and it was just delightful. A room full of love!
We sang our meeting and welcome songs. We shared our refreshments and sang “Happy Birthday” to Mary Givens, Pastor Jim Fackler, Amber Gathe, Erna Cameron, Sara Laucie and Sara Lissak.
Our leader today was Phyllis Rames and boy did she lead!  Straight out of her personal Bible, she read Mathew 25 and really focused on verse 40. Her devotions started by reviewing the final judgment and Jesus’s second coming, when all the nations will gather and will be divided in half, and the “sheep” (righteous Christians) will be separated from the goats (non- Christians). The King (Jesus) will take those who believe in him, to the home in heaven, he has prepared since the time of creation.
The Bible describes how Jesus was treated by Christians – when he was thirsty, he was given water; when he was hungry, he was fed; when he was sick, he was cared for; when he was naked, he was clothed; when he was alone, they were his friend; and when he was in prison, they visited him.
According to Mathew 25:40, whatever you have done to the least of these people, you have done to me (Jesus). Jesus then forces Satan away from himself and Satan stays with the goats, while Jesus leads his sheep to heaven.
Our entertainment began when Judy Varga performed a most moving rendition of “It is Well with My Soul.” I’m simply at a loss on how to describe how moving and beautiful this was, just trust me! This was the best solo we’ve heard all year, and I loved it.
We then started dancing to the infamous “Chicken Dance,” where we get up front and all pretend to be chickens, then we danced our “Locomotion” dance, where Randy leads our train around in circles all through Wesley Hall.
Randy sang one of his best songs – “Ring of Fire,” and after about four or five impromptu “poppers,” he jumped on stage and sang to “Lollipop!” The fun became so serious and intense, that most of the FAYCO attendees started dancing and singing, and that also included Phyllis and I.
So I’ve lost track of all the song names, but it should be sufficient to say that it was more fun than many could handle.  I do remember dancing with Brad Elmore to “Coalminer’s Daughter,” and I remember dancing and singing the “Tennessee Waltz” with Randy.
Then I had a big surprise when I re-met Gene Cannon. Gene now lives at Vandalia Rehab after he hurt his back and lost control of a leg. I’m certain he would enjoy some company, along with all the other attendees, at Fayette County Long Term Care.
Judy and Randy wore most everyone out, and absolutely everyone left with a smile on their face.
The pinochle players today were Rosemond Hobler/Richard Kruenegel, who won one and lost two games to Susan Meador/Shirley Locke. But I know they had fun, and as I’ve said before, here at Evergreen Outreach, we do fun VERY well. 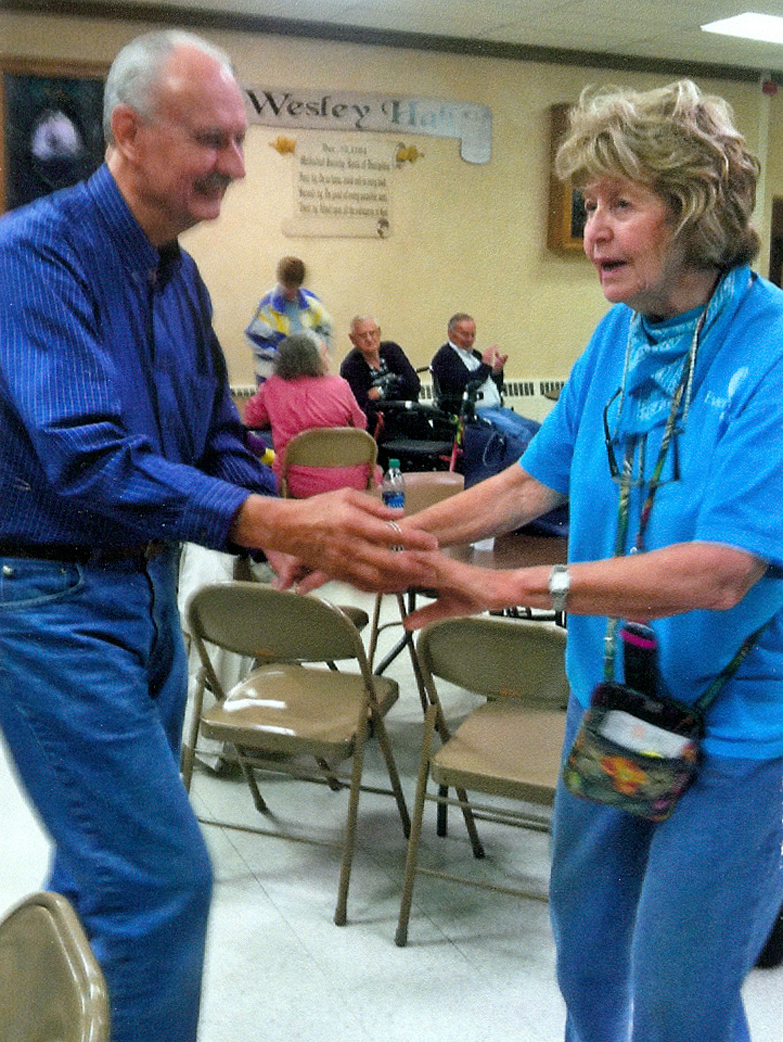 Phyllis Rames, the Evergreen Outreach leader for the day, dances with Bob Varga during Monday’s meeting.