About a week ago, I received an emergency e-mail from Susan Etcheson, who had company coming into town to accomplish some genealogical research in a very short amount of time.
The extended relatives, Tom and Pam Lankford, and his sister, Binky, were coming to Vandalia to visit their mother’s hometown.

Marietta Perkins Lankford was born here in 1918, a daughter of Simeon and Sue Schilling Perkins, well-known Vandalia citizens.
Rolling up my genealogical sleeves, I discovered that Simeon Perkins was born on Oct. 21, 1814, in New Haven, Conn., and died in Vandalia on Aug. 25, 1890, at the age of 75. He was already a resident of Fayette County when he married Sarah Parker Roberts on Sept. 28, 1841.
Sarah was born in Kentucky in August 1820 and died on Nov. 11, 1881, in Vandalia.
Simeon married a second time, on Dec. 19, 1882, in Vandalia, to Adah Adelia Shelton, and she died on March 2, 1934, at the age of 84, buried South Hill Cemetery. Her parents were William and Isabelle Martin Shelton.
One of the earliest records I found for Simeon Perkins was an entry in the U.S. General Land Office Records, 1796-1907, where he entered property in Fayette County on Oct. 10, 1840. This marks his advent into the state.
In the December 1850, the Agricultural Index of Fayette County, Simeon is listed as owning 50 acres of improved land and 80 acres of unimproved land with a value of $600. He owned two horses, a milk cow, one working oxen and one other head of cattle.
In 1860, when the census taker came around, Simeon gave his occupation as “tinner,” with real estate valued at $4,000 and  personal property, $600.
A notation in the 1904 “Historical Souvenir of Vandalia, Illinois” tells that west of the Green Tree Hotel, which was located on the northwest corner of Main and Fourth Streets, Simeon Perkins’ log home was the only building west along the road. Later, a newer home was built on the site, also a home of the Perkins family.
Simeon, with others, founded the National Bank of Vandalia. He was president of the Vandalia Board of Trustees in 1865, a charter member Royal Arch Masons No. 136 in Vandalia in 1869 and promoter of the Vandalia Paper Mill in 1882.
The first three children of Simeon and Sarah was first buried in the Old State Burial Ground and later moved to South Hill Cemetery.
Their children were:  Sherlock S. Perkins, died on Sept. 7, 1853, age 4 months and 8 days; Frances died on Jan. 8, 1855 age 9 years, 4 months and 20 days; and infant child of S & S Perkins, no dates.
Their next child, a son, Simeon Perkins Sr., was born on Feb. 4, 1884 and died in 1958. He married Susan (Sue) M. Schilling, born 1889, died on Nov 1, 1949.
Next in order of birth was Benjamin Perkins, born 1886, who married Eulalia Smith and owned Perkins Hardware Store in the 400 block of Gallatin Street, and Harriet R. Perkins, born 1888 in Vandalia.
Simeon and Sue Perkins were living in Havana, Ill., in 1912 when their first son, another Simeon, was born. Simeon Sherwood Perkins was 8 weeks old when his parents moved back to Vandalia and established their home here. Their daughter, Marietta Arlene, was born in 1918 in Vandalia and married Carl Lankford.
Tom and Binky’s mother, Marietta, was born and reared in Vandalia. She met her future husband, Carl Lankford, at Camp Robinson, Arkansas, while he was stationed there during World War II. From 1967-80, Carl was mayor of Orlando, Florida.
The Langdons’ visit back to Vandalia was homage to their mother, but accomplished another task that Tom had set for himself.
Among their mother’s possessions were Land Patent documents issued to Simeon Perkins for two parcels of land both located in Shafter Township, Sections 15 and 22.
The parchments, numbered 8615 and 8617, were dated Oct. 10, 1840, and at this time, Simeon was living in Cass County, Mich.
The task that Tom had set for himself was to entrust the documents into the care of the Fayette County Genealogical and Historical Society.
Susan and Ron Etcheson arranged a meeting between myself, the Langdons and a cousin, the former Linda Hubbartt, at The Leader-Union office, where the transfer took place.
Tom commented that these documents had been moved around from Illinois to North Carolina and Florida – and feels that they are home, now that have been returned to Vandalia.
What a fine tribute to their mother and to the Perkins family, whose roots go down fairly deep into the Fayette County soil. 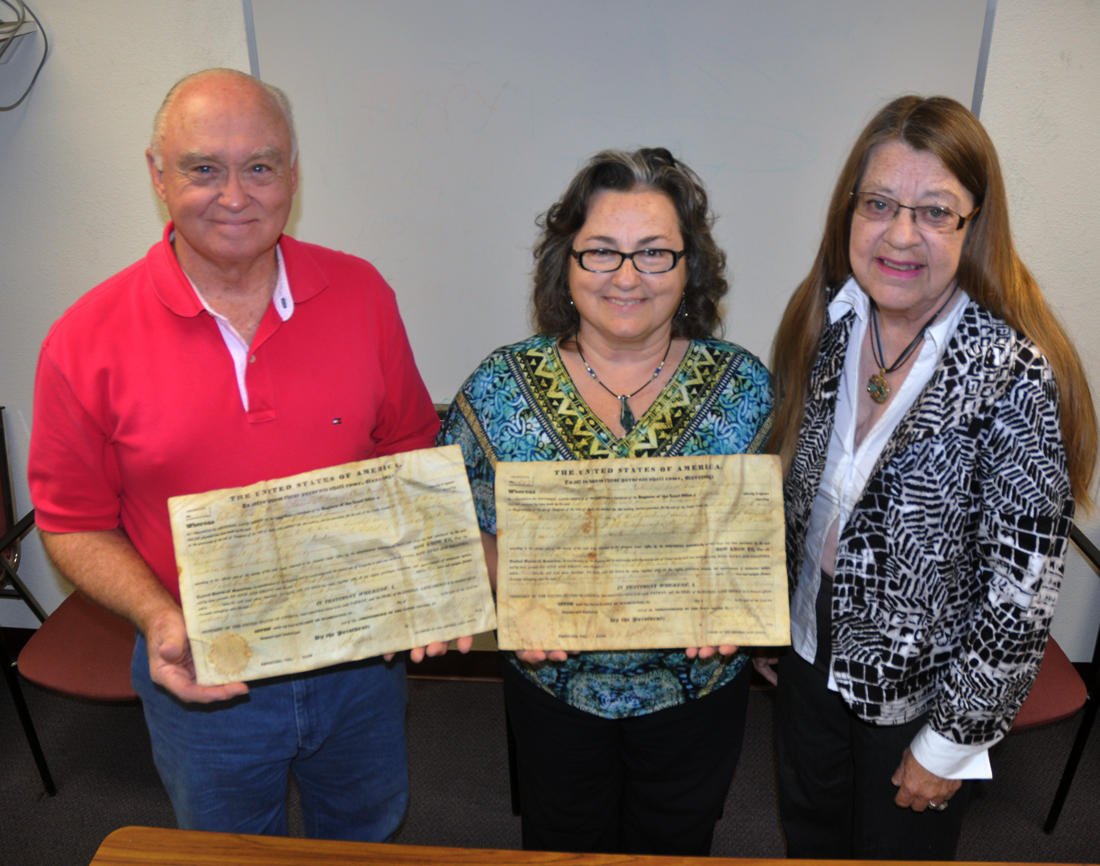