Different polls have them ranked differently, but all pollsters agree – Carlinville is one of the better football teams in Class 3A.

“They’re probably one of the two best teams we’ll see all year,” Vandals coach John Stout said after his squad fell 57-22.
Unfortunately, the postponement of last week’s game until Saturday morning didn’t prevent the Cavaliers from picking up right where they left off on Friday night.
For the second time in three years, bad weather caused a delay in the Vandals matchup against Carlinville. While a monsoon-like storm two years ago caused a lengthy delay that night, strong storms bearing lightning forced Friday’s game to be carried into Saturday morning.
After the Cavaliers jumped out to a 16-0 lead in the first quarter, Robby Lott narrowed the margin with a 43-yard return of an interception. A two-point conversion cut the Cavaliers’ lead in half.
“We scored on that interception, but the (bad part was that) the defense never got off of the field,” Stout said. “Then, Carlinville went right back down the field for a quick score.
“It’s hard to come back from that,” Stout said.
But the Vandals coach didn’t feel that his players gave up, either after falling behind 28-8 by the time lightning postponed the game on Friday or seeing Carlinville come back strong the next morning.
“They’re a good ballclub, and they exploited some of our weaknesses,” Stout said. “When you play a good team and you get down early, it’s hard to come back.
“They just had too many weapons for us.
“We played all right at times, but the times that we didn’t, they burned us,” he said.
“The thing we talked about all summer was, we’re going to play hard, no matter what, and I thought that for the most part, we did.
“They’re very experienced,” Stout said.
“Up front, the were a little quicker than we were, and that played a role, too.
“We’ve got to get better. If you’re going to be good, you’ve got to play hard against good people,” Stout said. “We’ve got to be more consistent.”
The Cavaliers had wrapped up their scoring when the Vandals added their second and third scores.
In the third quarter, Kelly Jones got the Vandals to the Carlinville 2-yard line with a 22-yard run, and a pass from Collin Nestleroad finished the drive with a pass to Codie Jackson, but only after some excitement.
After the snap went over his head, Nestleroad scrambled away from Cavalier defenders until finding Jackson in the end zone.
Nestleroad gave the Vandals their final score, but this time it was on while on defense. He gathered up a Carlinville fumble near midfield and outran defenders to the end zone.
For the two-point conversion, Nestleroad again connected with Jackson.
Vandalia gained 122 yards on 31 carries, with Kelly Jones leading with 42 yards on five carries. Bobby Bradley had 34 yards on 11 carries, Blake Hankins had 38 yards on seven carries, and Nestleroad had seven carries for eight yards.
Nestleroad completed three of eight passes for 43 yards and a touchdown. Jackson caught two of those passes, for 27 yards, and Marcus Durbin had a 16-yard reception. 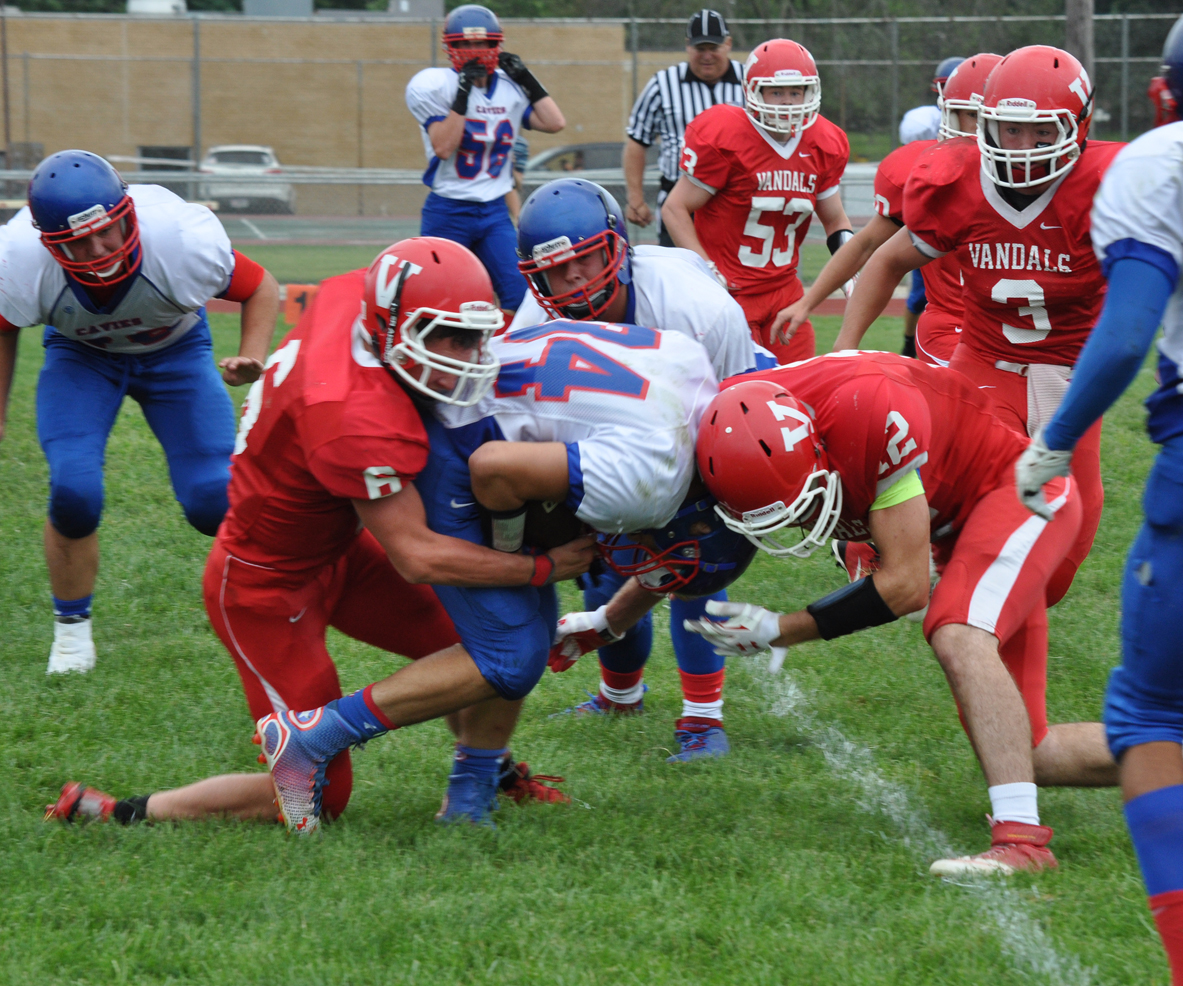 Vandals Robby Lott (6) and Codie Jackson wrap up a Carlinville ballcarrier during Saturday’s continuation of the Friday contest. Moving toward the play are Bobby Bradley (e) and Grant Wells (53). 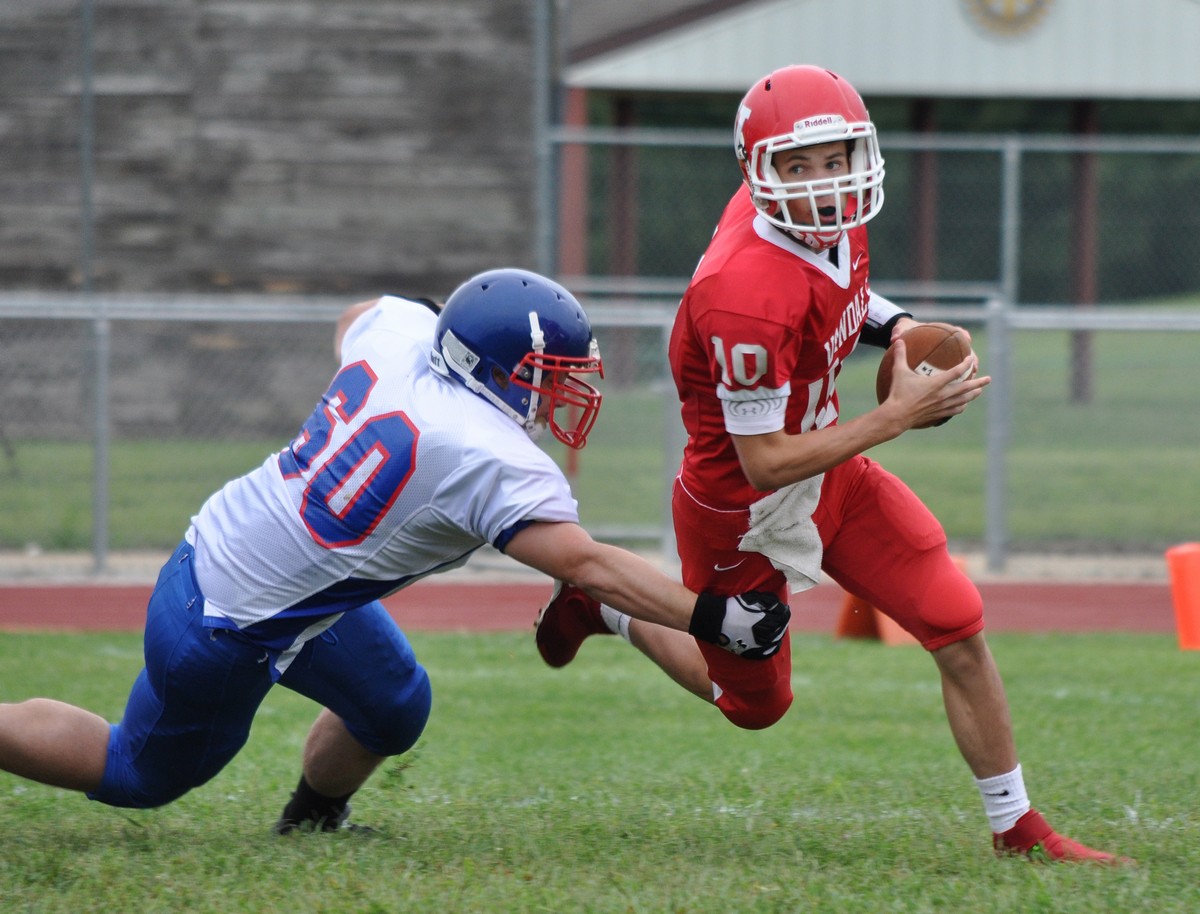 Vandals quarterback Collin Nestleroad scrambles away from a Carlinville defender on Saturday.