While his opponent claims that he is a wealthy man who is out of touch with residents of the state, Bruce Rauner said he has acquired that wealth through years of hard work.

And, Rauner said on Tuesday, he’s ready to take the same approach with Illinois.
Rauner made his fourth stop in Vandalia since announcing his run for governor. After winning the Republican primary election, Rauner squares off against incumbent Democrat Pat Quinn.
“What’s clear is that what’s working in Springfield is not working for you, it is not working for any family in the state,” Rauner said
“It’s working for corrupt politicians and patronage workers, and lobbyists and special interests that make their money from the government,” Rauner said.
“They’re working for themselves, not for you, and we’re going to change that. I’m going to work for you,” Rauner said to more than 50 Republicans at Holiday Inn Express.
He compared the status of Illinois government to farming.
“You keep one crop in the field year after year after year, the land gets damaged,” Rauner said. “We’ve got to rotate our crops.”
His campaign platform, he said, includes creating more jobs, making Illinois pro-business and creating a pro-investment economy; making government efficient and transparent; “investing in our education in every school district; and implement term limits for the state’s elected leaders.
Rauner said he learned to have a strong work ethic from his grandfather, and that having that work ethic has allowed him to be successful.
“I’ve made a lot of money, and this is my chance to give back,” he said.
Rauner said that he would not accept a salary as governor. “I’d rather leave that money for the taxpayers,” he said.
The same with a pension. “I’d rather that money stay in the system.
“I’m doing this as a labor of love – I love Illinois,” Rauner said. 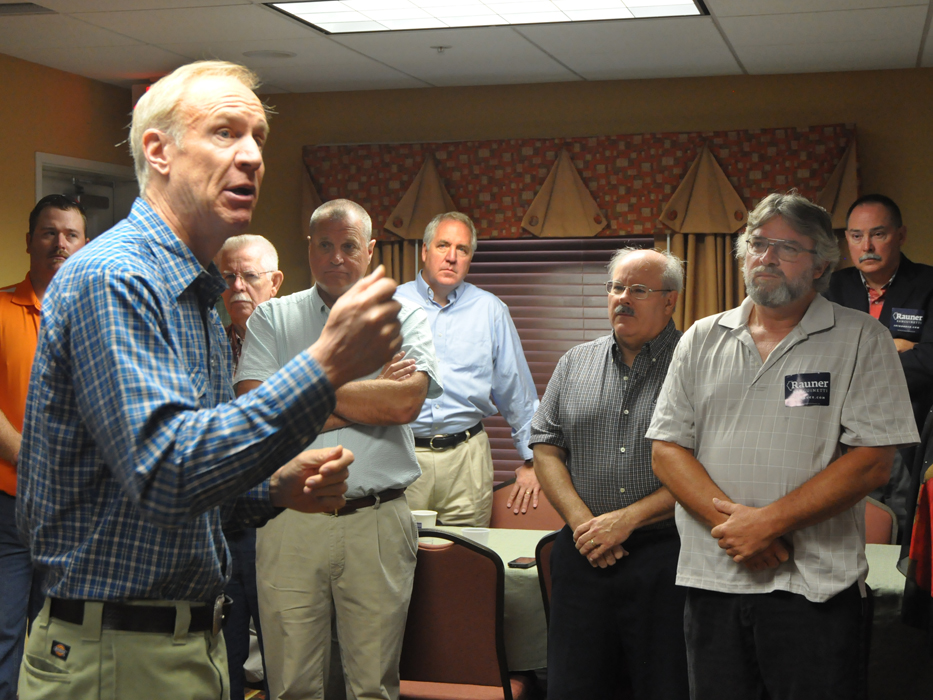 Bruce Rauner, the Republican candidate for Illinois governor, speaks to a crowd of about 50 people during a campaign stop early Tuesday morning.