This past Sunday was a very special day at St. Paul Lutheran Church in Wilberton Township. This year, 2014, represents the 150th year since the founding of the church by emigrants from Dodge County, Wis.

Sunday was an extra-special day for me, personally, because several people I had met during the course of my research of these “Wilberton Germans” during the past 30 years attended this special event, including Mona Houser of Hillsboro, Mo. (I last saw her in 1985); Roger Boye of Evanston (it had been a good 15 years since I had visited with Roger) and Dr. Robert Shively of St. Louis.
Judy Albrecht Hilbert of Eden Prairie, Minn., also was among the 276 people who joined in the celebration of this special anniversary. Judy’s people were among the group of “old” Lutherans who moved to Wilberton Township from Collinsville in Madison County.
Judy had come to visit with her Albrecht relatives who are still in the area, and to learn more about her immigrant grandparents, Maximilian and Margarete Wendler Albrecht. Having only a brief time to talk together at the St. Paul reception, we made plans to meet at Evans Library this past Monday morning and share our data.
One of the papers that Judy had in her possession was a family outline, prepared by a family member some years ago. It was interesting to learn that the Albrecht family had provided a number of Lutheran pastors down through the years, following the Old Testament precedent that each family should provide at least one son for a church vocation. The one who was sent was often the one who excelled intellectually rather than physically. The strongest were needed on the farm.
Judy’s grandfather, Johann Carl Albrecht, was enrolled in Concordia Seminary in Ft. Wayne, Ind., soon after his confirmation at St. Paul. This is why she grew up in Minnesota.
Maximilian and Margarete were parents of seven children when they came to Fayette County about 1868, including, Sophia, Friedericke, Pauline (died at age 6), Heinrich (died from malaria at age 10), Otto (died from malaria at age 12), Johann Carl and Emma. Four more children, Katharine, Otto, Esther and Rebecca, were born to them after the move.
Max’s brother, Henry Albrecht, also settled here, and they each bought 80 acres of property about one-half mile from St. Paul Church. Only 40 acres separated the brothers, and these acres were later purchased by Max’s daughter, Sophia, and her husband, John Usinger.
Max was a blacksmith by trade, and a wheelwright. In those days, wheels – including rims – were all entirely handmade. He made some of the finest carriages available.  Henry was a tailor by trade, and married Maria Johanna Kluge. Their children were Henry Martin, Augustine, Robert, John and Maximilian F. Albrecht. Members of this family moved to Nebraska.
The brothers were sons of Maximilian and Johanna Christiane Reimer Albrecht,  and were born in the Kingdom of Saxony.  From family legends, the elder Maximilian was a shoemaker and tanner in Germany,  and became a journeyman Cordovan leather maker by the time he was 25 years old. His grandchildren remembered when he lived with them that he enjoyed trapping, and they often walked the trap line with him.
During those early years on the prairie,  they were very poor and lived in a one-room log house with a lean-to, which served as a kitchen. A stairs led to the second floor,  where they had three double beds and a trundle bed that could be pushed under another bed when not in use.
The older children slept up there, as did “the grandfather,” Maximilian Albrecht I, when he lived in the home. Every fall, the log house had to be gone over and the clay that had dropped out from between the logs during the summer had to be replaced to keep the winter cold out.
Max Jr. was well read and possessed some of Martin Luther’s works in a time when many homes had one book – the Bible.
As Judy and I compared our records, we discovered that even between our families there were connections. I shouldn’t have been too surprised; after all, we both descend from the Wilberton Germans. 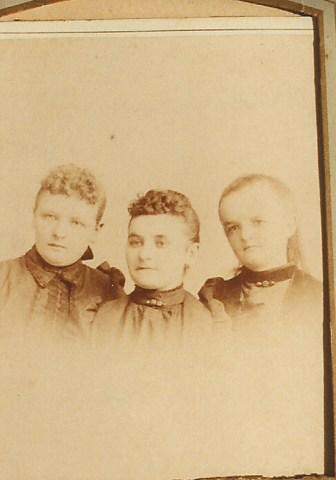