Equipped with old photographs and my history file, I arrived at the meeting, taking my place at the long table. As we waited for the other committee members to arrive, I began to share some of the history and stories I had learned over the years about the congregation.  This is my father’s church.
Bob Schroeder, board president, opened the meeting and began to tell of the plans that were in the works for the celebrations that would take place this year. Three special services would be held in April, August and September, and they had already engaged David Knecht, of East Lansing, Mich., as their after-dinner speaker at the April celebration.
David was a great choice because of his deep and long interest in his roots, which include many of the St. Paul families.
Imagine my surprise when Bob turned to me asking if I would serve as the keynote speaker at the second celebration! I thought I was at the meeting to share history. It was a "deer in the headlights" moment for me. I gratefully accepted.
I learned that Dave Knecht, a historical buddy of mine, who had been working on a book of St. Paul  history several years, had given his work to the congregation as a fundraiser. The commemorative book, “History of St. Paul and Its Earliest Settlers (1864-2014)" was printed by Kingery Printing of  Effingham, and is a well-written addition to the recorded history of Fayette County.
Arranged by years, the history of St. Paul and her people unfold as their story is told in letters, photographs and documents. This book, containing 529 pages, was ready to sell in time for the April celebration, and as history books go, is one of the best I have ever seen.
Aided by his wife, Nancy, and brother, Del Knecht, as editors and proofreaders, David devoted countless hours to research, organize and get the book camera-ready for publication. It is a great tribute to St. Paul.
Michael Sasse is credited with "discovering" the prairie land of Wilberton Township when he took the Illinois Central Railroad up on their offer of free passage to view it. Upon his return to Dodge County, Wis., his description of the land sounded pretty good to those who heard him speak, for they had spent much time moving stones from their fields to raise a crop.
An article about St. Paul’s 75th anniversary was published in the June 8, 1939, issue of The Vandalia Union, and recounted the beginnings of this congregation. A few more bits and pieces of their story were added in this piece.
One of the original Wisconsin settlers, whose name is yet unknown to us, after having lived in the settlement for a time, wished to return to Mayville, Dodge County, Wis.  He offered to sell his frame house to the church fathers, which they accepted.
It took five yoke of oxen to move the house the nearly two miles north to the center of the settlement. Here, it was used for a number of years as a church.
As more families arrived, this building became too small to accommodate the church, and a larger building was built, with the original church house being used as a school and as a residence for the teacher. In the 1936 article, it was noted that even at that time a part of the old church was a part of the teacher’s house.
The first pastor, the Rev. Endres, stayed a short time, being removed when he, with good intentions, decided to practice medicine. The result was the death of August Sasse.
Fred W. Sasse wrote a letter to the editor of the Vandalia newspaper in 1936 offering his regrets that he could not attend the Old Settlers Reunion on account of bad eyesight.  He wrote that his parents moved from Wisconsin to this state in 1864 in the “full blast of the Civil War.”
They settled down in Wilberton Township,  where his father, Michael Sasse, “bought 240 acres from a feller by the name of William (Buck) Davis. About 120 acres of the land was number one white oak timber. The trees stood just like candles. It was on the edge of the timber, a half a mile south of Little Hickory Creek. The younger generation would be surprised to see timber like that 60 or 70 years ago.
“A dozen or more families from Washington County moved into Fayette County and settled in Wilberton Township.  All these people dug wells and wanted rock to wall them up in the winter of 1867. My father had a good rock and sand quarry, where he dug rocks for these people. One evening when I came down there – this may sound odd but it is an honest fact – he found a den of rattlesnakes.
“He mashed their heads and laid them side by side, and there were 60 of them and the largest one had 16 rattles. In 1866, I was sent on an errand to my Uncle Fred, who lived one mile south of us. When I walked up the road, there were 14 deer grazing in the field.”
In 1939, St. Paul’s pastor was the Rev. Waldmar Petzoldt, a direct descendant of the first Lutheran pioneers from Saxony,  who came to the United States in 1839 in a flotilla of five ships. One shipload was lost at sea. The first contingent totaled 600 souls.
My research on my father’s family has led me to the knowledge that I, too, am a descendant of these sturdy Saxon pioneers, the “old” Lutherans who settled Wittenberg and Altenberg, Mo.
At the 1939 anniversary celebration. Rev. W.C.A. Martens, former St. Paul pastor, gave an address in which he stressed the fact that the St. Paul church was the mother church of all the churches of the Missouri Synod in this county.
This Sunday, following a 12 p.m. catered dinner and a guest speaker – me – the Rev. Dr. Michael Harrison, president of Missouri Synod Lutheran Church, will be guest pastor at the 2 p.m. afternoon service held at St. Paul. The community is welcome to attend. 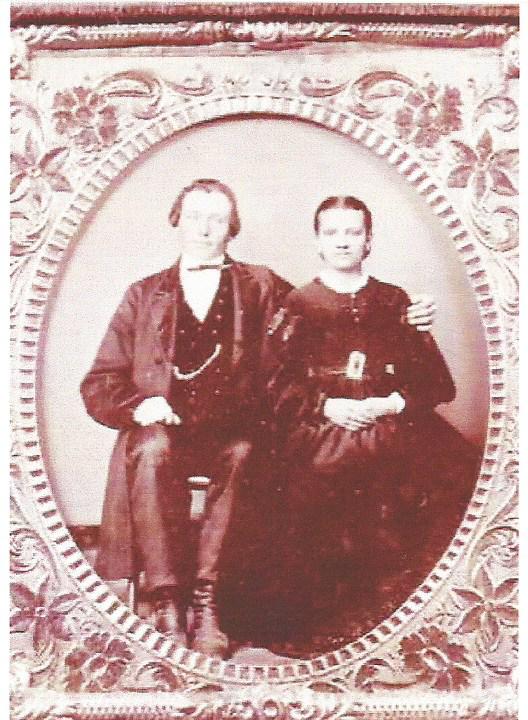 John and Marie Emelie Erck were married in Venedy in Washington County on Feb. 9, 1868. She was a descendant of the Saxon German Lutherans who settled Altenberg and Wittenberg, Mo.