A few months ago, Brent Hunter shared with me papers that his mother had copied from the original church records of the Hurricane Baptist Church, organized near VanBurensburg before Illinois' statehood.

The group that formed the church was from Warren County, Ky., and had made a settlement in the area as early as 1816. One of their first actions was to form a church. They named it the Hurricane Baptist Church, later called Old Hurricane.
The earliest beginning is recorded in the records, “Joseph Wright and Ezekiel Rush…believing this settlement needs God, join with George Shipman, a conventor (who) has a Bible and can read it, to open a door for members in a new church.”
The first entry is from March 1818. The church continued to 1914, and the records were included in the book, “Old Hurricane Church 1818-1950,” which was published in 1986. These records provide an intriguing story about a people who settled in this area at a time of many dangers.
The earliest known members of the Hurricane Church were: Absolem Mason, Elijah Freeman, Henry and Ebenezer Pyatt, Henry Hill, George Shipman, Ezekial Rush, Wooten Harris, Cyrus Walker, Charles Wright, Henry Rowe, Benjamin Roberts, Zebulon Harris, John Beck and Joseph Wright, who was made squire and given the right to perform marriages. A brother Casey is mentioned in the records, who could be Aaron Casey.
Two of the founders, Zebulon Harris and John Beck, accompanied Isaac Hill to this territory in 1810, and this is probably the reason the settlement was made here.
Hill had been sent here by Thomas Jefferson on an expedition to look for salt, gold, silver, cannel (coal), report on navigation of watercourses, take note of rainfall, days no frost and to trace a Third Principal Meridian from the Cahokia line to the Illinois River to the north.
Isaac Hill remained in this area for several years and is credited with building Hill’s Fort in southwestern Bond County in 1809. He traveled between Illinois and Kentucky into the 1830s.
The Hurricane Church record book tells us many things, including that they set rules.  One brother complained that there was “too much bizness and too little praisin' God.”
It was agreed they would help new settlers raise a house and plant corn. Those who refused would be excluded from membership. In November 1819, a letter was sent to Isaac Hill in Kentucky, telling him to inform all newcomers not to bring slaves.
“We will not tolerate slaves in this settlement or selling wives or keeping bed wenches. This is good land, favored by God, and (a man) can make Christian living without the curse of black slavery. We are firm in this manner, and ones believin' in slaves will not be welcome and will be run out.”
In the spring of 1819, 11 Indians visited the meeting in Brother Rush’s timber. They were camped at Blind Indian Spring, located just north of the Indian Springs Golf Course on Ill. Route 185, northwest of Vandalia.
The minutes record the brothers and sisters agreeing that the blind Indian could be a member by experience “if (his) woman could know our talk,” and Brother Wright would marry them. No further entry is made regarding the couple, so it is possible she did not learn “our talk.”
During services in July 1819, it was recorded: “Brother Freeman preeched that Indians have souls in the morning. Brother Harris preached saviges were born of the Devil in the evening.” Brother Rush said that this is the same talk that caused the separation of churches in Kentucky, and “spoke in righteous anger” against preaching about it.
Brother Rush then whipped Brother Harris and Brother Poteet, and was excluded until judged by impartial members. Henry Pyatt recorded that day, “We must pray for wisdom and love and still tungs.”
In addition to the Hurricane Settlement, there were at least two others, the Newton Coffey settlement and West Fork. In August 1818, it was reported in the minutes that there were 20 members; seven from West Fork.
Meetings were held in the homes of the members in the various settlements until 1822, when a log building was constructed. Each of the adult male members was assigned raw materials that they were to contribute.
Some supplied logs, including Pleasant Scribner, Holly Prater, Mark Mason, Henry Sears, Elijah Hill and Henry Pyatt. Henry Sanders was to make three doors, and Henry and William Rowe were to build the pulpit.  Any member who had no land was to rive boards on open land.
Land was given by Easton Whitten and George Shipman for a free burying ground in 1832. In 1868, the log church was replaced by a frame building, which stood until 2002,  when it became unstable and was torn down.
It is said that the oldest records of this church were found in a picture frame. Jack Cole had them and shared the papers with local genealogical societies and with Earl Wolcott, who took the time to transcribe the records. The originals were said to have been placed with the Illinois State Historical Library, and are now lost.
Nearly 200 years later, many descendants of the first pioneers of the Hurricane Settlement, including Brent Hunter, live today in Bond, Montgomery and Fayette counties. 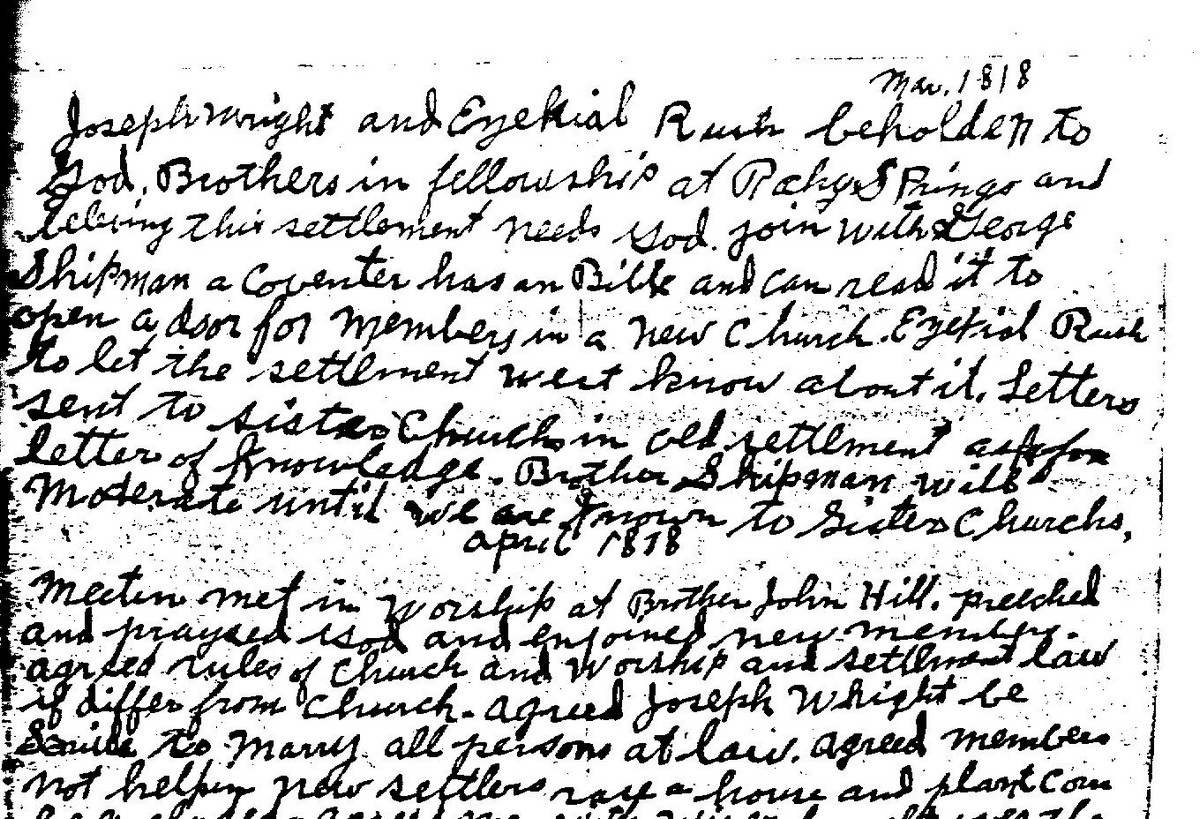 The early records of Hurricane Baptist Church, later called Old Hurricane, were written down by the families who formed it in 1818. It listed members and outlined rules of the church.