ROBINSON – Quinn Wadkins had very little experience running a home run trot going into last Thursday’s District Tournament game against Olney.
And he never anticipated that would be the day he would round the bases.
Wadkins hit his first home run since pony league in the eighth inning and Austin Schwarm also homered to back a complete game from Matt Tomazzoli in a 14-2 win against Olney that forced a double-elimination championship game.
“It was weird,” Wadkins said of the solo home run that just snuck over the 300-foot marker in left field. “Nobody said a word in the dugout, so I just thought I popped out.
“They all said I did the trot wrong.”
Wadkins also doubled and scored three times to break out of a 2-for-14 slump he endured through the first three games of the tournament.
Gavin Ratermann was also having his share of offensive struggles – going just 2-for-21 in his past six games – but he also came out of his slump with two hits and two runs.
Acting coach Rod Mueller said he was never worried about either player.
“Those guys are gamers,” he said. “Some games, it may not seem like they are rolling, but they are rolling all the time.”
Tomazzoli fired eight strong innings for his fourth complete game in five starts this summer.
He struck out six, allowing two earned runs on seven hits and two walks to pick up his third win.
“The pitching was good,” Mueller said. “We probably should have gone to the bullpen, but we knew Tomazzoli wasn’t going to be back tomorrow, so we left him out there.”
The offense supported him early, with Johnnie Clift and Connor Beasley each rapping RBI singles in the top of the first inning. An infield single in the bottom of the third cut Vandalia’s lead in half.
But after that, Post 95 put the game out of reach.
Schwarm reached on a bases-loaded fielder’s choice, Clift followed with an RBI double and Brett Mueller then rifled an RBI single to give Vandalia a 5-1 lead.
After Tomazzoli retied Olney in order in bottom of the fourth, Post 95 added four more runs in the fifth.
Ratermann had an RBI single and Clift added another RBI double for his third hit of the game, giving him back-to-back three-hit games.
Mueller hit a two-run single in seventh to put Vandalia (31-8) ahead 11-1, but Olney extended the game by opening the bottom of the frame with back-to-back hits and a sacrifice fly.
Wadkins homered in the eighth, and Schwarm hit a two-run shot to left three batters later. Tomazzoli allowed three hits in the bottom of the inning, but kept Olney off of the board to end the game.
“It would have sent us home if we had lost,” Wadkins said. “To go out and beat them by 12 or 13 runs, it gives us a good feeling going into the championship.”
Clift, Mueller and Schwarm each had three RBI in the game, and Schwarm scored a season-high four runs.
Brock Trexler quietly had a strong game for Post 95, drawing three walks, scoring twice and getting one hit and one RBI. With five walks in the past two games, he has raised his on-base percentage by .047.
Thursday, July 17
Vandalia 14
Olney 2
V: 2-0-0-3-4-0-2-3—14-12-0
O: 0-0-1-0-0-0-1-0—2-7-3
WP: Tomazzoli (3-1); 8 IP, 7 K
LP: Zuber; 3 1/3 IP, 0 K
Post 95: Clift, 3-for-6, 2 2B, 3 RBI, run, SB; Wadkins, 2-for-4, 2B, HR, RBI, 3 runs; Ratermann, 2-for-5, RBI, 2 runs; Mueller, 2-for-5, 3 RBI, SB; Schwarm, 1-for-4, HR, 3 RBI, 4 runs; Trexler, 1-for-3, RBI, 2 runs, 3 BB; Connor Beasley, 1-for-3, RBI; Ryan Miller, run, 2 BB; Noah Powless, run; Clinton Hood, BB.
Record: 31-8

Vandalia’s Johnnie Clift tries his hardest to slide around the tag of Olney’s catcher last Thursday, but wasn’t able to get his hand on the plate. He would score late in the game, a 14-2 victory for Vandalia. 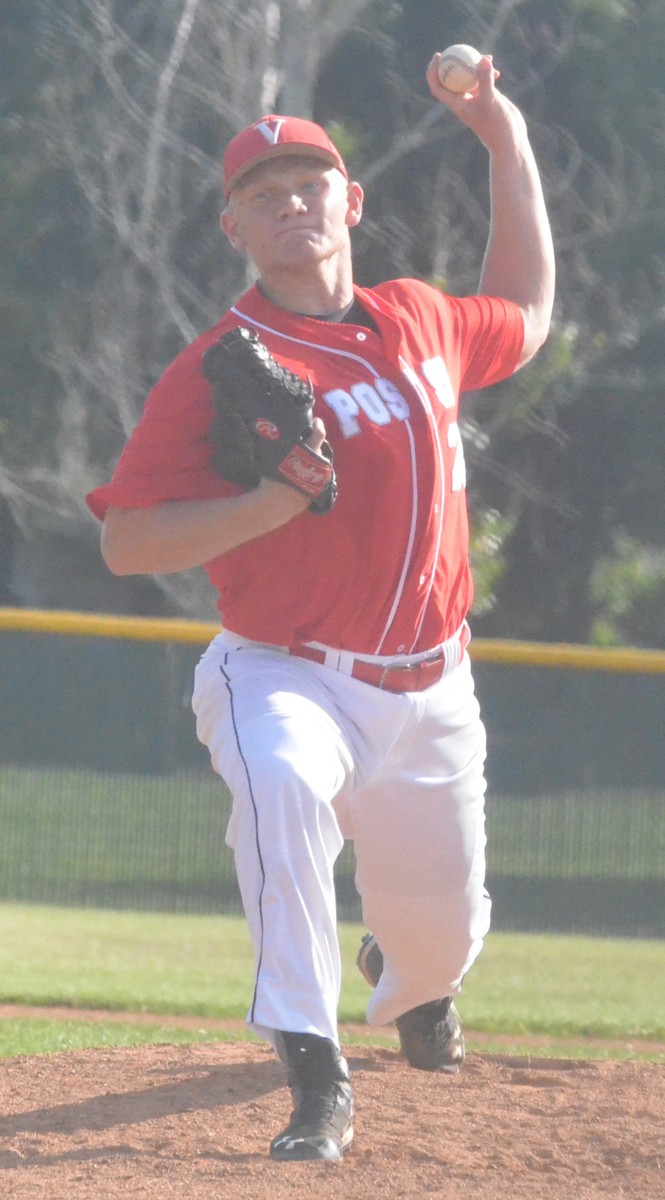 Matt Tomazzoli tosses a pitch during his fourth complete game outing of the summer.