ROBINSON – After the worst pair of games of his summer, Kyle Bray needed a break.

Going hitless for two straight games was bad enough – also striking out in each game just made it worse.

They were the last two games of the Mattoon Sr. Legion Firecracker Classic – a wooden bat tournament – at the end of June, and Bray would be leaving soon for a hockey camp.

He wouldn’t return to Post 95 for a week, joining the team on the final day of the Robinson Wounded Warrior Tournament, going 3-for-5 over two games, but more importantly, making contact again.

“It took a lot of thinking,” Bray said. “I was down on myself, and I have a horrible mentality when it comes to wooden bats – I’ve never hit with them and I don’t feel comfortable with them.

“The week off, I would say, even helped,” he said. “It got me back in the right mindset for baseball.”

Bray has yet to strike out in the 30 plate appearances since those games, raising his average from .390 to .444 by collecting 13 hits in 22 at-bats.

It’s classic Kyle Bray – the one who has only struck out five times in 100 plate appearances.

“I can’t explain it – he’s just a good, good offensive player,” he said.

“We played in that wooden bat tournament, and that just flattened him,” Mueller said. “But you put an aluminum bat in his hands, and that bat has confidence written on it.”

Only this time, he was traveling to a hockey camp following the best game of his career.

He gathered 11 total bases on a single, three doubles and his first home run of the summer in a 20-17 win against Salem on July 10.

The camp made the recent South Central High School graduate absent from Vandalia’s loss to Teutopolis in the first game of the District Tournament, but last Wednesday, he traveled home from Miami University in Oxford, Ohio, just to play in two must-win games in the loser’s bracket.

Seemingly unexhausted by the travel, Bray had five hits and six RBI as Vandalia won two games to stay alive in the tournament.

And he then went back to Oxford, some 200 miles from Robinson.

“It wasn’t a solo effort on my part – everybody played well.”

The perfect prototype of a No. 3 hitter, the first baseman mixes power and contact as good as anyone, with 13 of his 36 hits going for extra bases, the third-best rate among Post 95’s players.

He’s reached base 55 times in 27 games this season, and his .550 on-base percentage easily leads the team, as does his .444 batting average.

After his home run against Salem, he became the team’s fourth player to complete a season cycle.

“He is so confident in himself, and that’s 95 percent of it,” said teammate Austin Schwarm, also a South Central grad. “He doesn’t always do things perfectly fundamental, and he’ll even tell you that.

“But he is so confident in his swing and his ability to pick balls at first base that he can compete with anybody else and out-do almost everybody else.”

Bray had five home runs and nearly 20 doubles over 46 games this past season for South Central, helping the team to a share of the regular-season championship in the National Trail Conference, the NTC Tournament title, a regional championship and a sectional championship appearance.

Bray was named the NTC Most Valuable Player after hitting nearly .500 during the fall season.

And that is exactly the type of average he prefers to have.

Despite all of those athletic successes, Bray’s premier achievement came in the classrooms at South Central High School.

The 2014 valedictorian prioritized academics in order to put himself on a path toward beginning a career as an orthopedic surgeon, specializing in sports injuries.

To do that, he will major in biology at St. Louis University.

And maybe confuse a teammate or coach in the dugout with his vast knowledge of the subject.

“He is such an intelligent guy, and he knows so much,” Schwarm said. “He’s going to medical school eventually, so he’ll talk about biology stuff, which I know nothing about.”

Bray is one of two recent valedictorians on the squad, joining Patoka’s top 2014 student, Clinton Hood.

Hood said that instead of holding deep conversations, the two usually joke around or poke fun at each other, which leaves Bray to leave unexpected nuggets of knowledge lingering in the dugout.

“He’s very well-spoken and very highly-educated,” Mueller said. “We’ll be sitting in the dugout, and he’ll spout off facts about something that doesn’t even have anything to do with baseball.”

As a surgeon, Bray will be tasked with spouting off his knowledge of the human anatomy to patients and colleagues in order to repair tendons, ligaments and broken bones.

Given his history, it’s unlikely he’ll strike out.

ROBINSON – Without organized hockey in the area, Kyle Bray had to do some traveling to make his dream of becoming a goalie a reality.

Plus badger his parents for a year or two until they allowed him to play.

At 11, Bray first played on an organized team, and he has grown into a high school all-star who will continue his hockey career at St. Louis University.

“Back in the day, I remember watching hockey with my dad, and ever since then, I’ve thought it was awesome and wanted to play,” Bray said, remembering Keith Tkachuk and Jose Theodore as favorite pro players. “It took me a couple of years to convince my parents, but it’s paying off, since I’m playing college hockey.”

Bray played for the Collinsville High School club hockey team, starting as goalie for the past two seasons and helping the Kahoks win the Mississippi Valley Club Hockey Association Class 1A championship.

During the playoff run of seven games – which Bray called “unbelievable” – he had 158 saves and allowed just seven goals, as the Kahoks went 6-1. They beat East Alton-Wood River 2-1 in a best-of-three series, including a 6-1 victory in the title game.

In the first two rounds of playoffs, Collinsville swept Edwardsville and Columbia. The Kahoks finished the season at 14-6-4.

“I was seeing the puck really well, and if I didn’t see it, the puck hit me,” Bray said. “It was the best I have ever played, and hopefully, it carries over.”

Bray said he always knew he wanted to be a goalie, even though he was forced to skate out on the ice toward the beginning of his career.

But through camps and youth leagues, Bray made his name known as a standout goalie, and that served him well during the MVCHA’s out-of-district player draft when he was the first pick.

During his senior season, Bray stopped 532 shots and allowed just 1.71 goals per game. He had three shutouts, including two in the postseason. 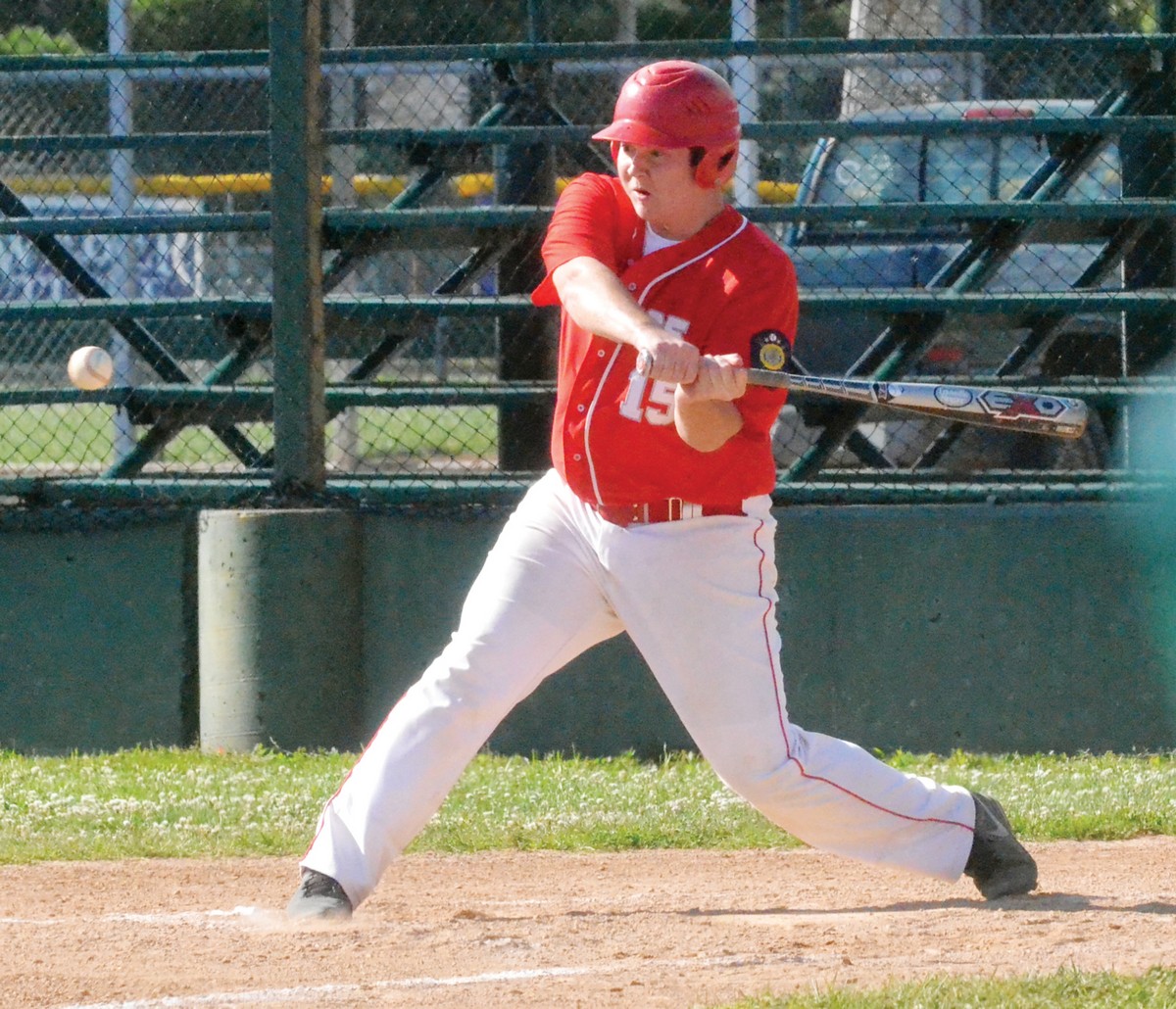 Kyle Bray collects one of his five hits during a doubleheader last Wednesday at the Sr. Legion District Tournament. He left a hockey camp in Oxford, Ohio, that morning to play in the games.