Two rescue helicopters – Arch from St. Louis and AirEvac of Effingham – participated in Saturday’s display of emergency response equipment at the Fayette County Fair in Brownstown.

Firefighters, First Responders, EMTs and paramedics showed their rescue equipment, and demonstrated vehicle extrication, on-site care of trauma victims and transfers via emergency vehicles.
When the two helicopters landed, a lady in a wheelchair was seen making her way over the rough terrain of the field to greet them.
Closer inspection revealed it was Jane Scott, who had  fallen from her roof seven years ago while power-washing it and suffered a broken back The accident left her a paraplegic, paralyzed from the waist down.
She said that, fortunately, someone was near to immediately summon help.
She was flown by Arch Helicopter to St, John’s Hospital in Springfield, where she underwent surgery on her back, and was then transferred to Springfield Memorial Hospital for rehabilitation.
When she learned the helicopters were coming to the area, she decided she was going to visit them.
“I just wanted to see where I was lying in the helicopter during the flight,” she said. “I didn’t remember anything about it.”
She visited with the crew of the Arch helicopter, and did see where she would have been positioned within.
Having a real interest in the machine that flew her for that important first diagnosis and treatment, she also visited with the Air Evac team and looked over their helicopter.
Jane Scott is an ideal role model and example of courage, perseverance and grit … and also, gratitude, for the people and the means that helped her.
She was grateful enough that she traveled in her wheelchair across rough ground to examine the helicopter that flew her to needed emergency care and show her appreciation to the skilled, knowledgeable pilots and emergency medical teams that administer care, using top-of-the-line equipment and techniques during the flight. 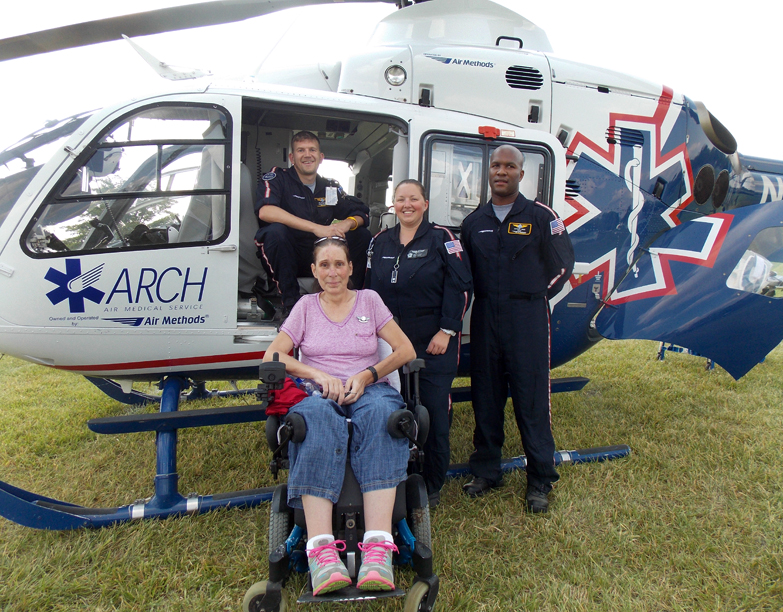 Jane Scott is shown with an Arch Air Medical crew on Saturday at the Fayette County Fairgrounds in Brownstown.