About 4½ years after its city administrator left to take another job, the city of Vandalia has decided to again try to fill that position.

After meeting in closed session for 10 minutes on Monday, the city council voted unanimously to advertise the city administrator opening, with hopes of that person also leading the city’s economic development efforts.
After the meeting, Mayor Rick Gottman said that $85,000 has been included in the new budget for the position.
“We need someone here eight hours a day” to handle the city’s administrative duties, including those related to economic development, Gottman said.
That person, he said, will oversee the efforts to recruit new business and industry while also working to retain that which is already here.
Filling the position, which has been vacant since 2010, has been discussed in recent years, including during the mayoral campaign last spring, Gottman noted.
The city council agreed to switch Vandalia from a mayor-aldermen form of government to that of a city administrator form in 1997, as Rich Walker neared his final term as mayor.
Ron Neibert was hired as the first city administrator, and he was on the job for about 10 years.
When Neibert left to take the city administrator post in Mt. Vernon, the city council appointed Jimmy Morani to the post on an interim basis in February 2007. Two months later, Morani was hired for the job.
In February 2010, Morani left to take a similar position in New Baden.
The city attempted to replace Morani and had, in fact, hired a Northern Illinois resident, John McIntyre, for the post. However, on the day that he was to begin his new job, McIntyre informed city officials that he had decided not to take the job, basing his decision on “several critical personal and family issues.”
After that failed attempt to fill the post, the council – at Gottman’s recommendation – agreed to hold off on hiring a city administrator as it worked to tighten the city budget.
That action included promoting clerical employee LaTisha Paslay to the post of executive secretary and giving her additional duties and responsibilities. In recent years, Paslay has completed extensive training to handle those responsibilities, including ones in economic development and tourism.
Gottman said on Monday that as a new city administrator is hired, the council will be discussing Paslay’s future role in city operations.
The economic development duties to be handled by the new city administrator were formerly handled by a director of economic development, a post also created in 2007.
But the city council voted in June 2011 to eliminate that position as part of its budget-cutting measures.
Also on Monday’s meeting, the council agreed to address a parking issue on a section of Tower Street by prohibiting parking in that section.
The council OK’d an ordinance amendment eliminating parking on both sides of Tower between Elm and Willow streets after hearing complaints from residents of that area.
At its meeting on July 7, the council’s streets committee heard residents of the 900 block of Tower Street say that during baseball games at Simma Park, people are blocking their driveways and causing other problems.
It was noted during that meeting that an area near Simma Park formerly used for parking had been closed off, causing the parking problems.
One resident of that block of Tower Street said that he has had people pull into his driveway, leave ruts and tear up his garden.
Several aldermen, including streets committee chairman B. John Clark, and Public Works Director John Moyer have looked over the area, and they were among those pointing out that parking along that area – even on just one side of the street – would make impossible for emergency vehicles to use that section of Tower Street.
In other action:
• Gottman praised Sandra Leidner, director of the Lincoln Heritage Festival, for her work in organizing the two-day event, and gave special praise to the youth who performed several historical skits during the festival.
“They done one heck of a job,” Gottman said, noting that several of the young people returned home just to participate in the festival.
Aldermen Neil Clark and Jerry Swarm also praised Leidner for her work on the festival, with Clark saying he would like to see the city pass a resolution to recognize her.
• The council approved an agreement with Hurst-Roche Engineers for the annual inspection of the Vandalia Lake dam. The city will pay the firm $2,900 for the work.
• The council accepted a $27,825 bid from Whiteside Communications of Sorento for 12 digital mobile squad car radios and 12 portable digital radios for the police department.
Police Chief Jeff Ray informed the council in writing that he had obtained grants of $10,000 from the Hazel Kelly Foundation and $6,886 from the Ruemmelin Foundation.
He also noted that Fayette County E-911 had paid $17,820 for a digital repeater and antenna on the city water tower.
The radios will be used as the police department discontinues its use of the Starcom radio system. That decision, Ray said, will save the department $5,712 annually.
The purchase of the new radios, he said, will also allow city police officers to communicate with area fire departments, the Fayette County Sheriff’s Office, local ambulance services and other area emergency responders, which has been a problem in recent years.
• The council approved the $36,400 purchase of seven aerators for the wastewater treatment plant from WTR Solutions of Earlham, Iowa.
• Gottman told the council that he hopes to have in time for the Aug. 4 meeting more information on the status of the Thrill Hill road bridge, including what work will be needed and an estimate on that work. 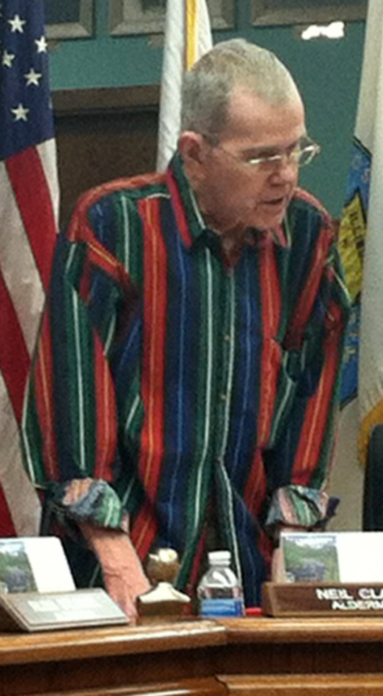 At Monday’s city council meeting, Mayor Rick Gottman presented Alderman Neil Clark (above) with an Abe Award to replace the Chamber of Commerce award that he lost in a 1980s fire.