Top-seeded Vandalia was upset in the first round of the District Tournament on Sunday, taking a 6-4 loss to No. 4 Teutopolis in Robinson.

T-Town’s Andy Borries struck out 15 in the winner’s bracket semifinals of the District Tournament, which was delayed by rain on Saturday and Monday, pushing Vandalia’s next game to Wednesday afternoon at 4 p.m.

With a win against Robinson, Post 95 would continue with another game at 7 p.m. against Teutopolis. A win there would put Vandalia against Olney in championship game of the double-elimination tournament, which is being held at the City Park in Robinson, on Thursday evening. Olney would have to lose twice, since it is undefeated so far in the tournament.

Dalton Crisman hit a two-run double in the third inning to give Vandalia a 2-0 lead, but Teutopolis tied the game with single runs in the fourth and fifth innings.

Ryan Miller reached on an error in the fifth, allowing two runs to score, but a wild pitch and an error in the bottom of the sixth gave T-Town a 5-4 lead. The final run scored on a sacrifice fly later in the inning.

Vandalia closed the regular season last Thursday with a wild win at Salem.

Kyle Bray had 11 total bases, Brett Mueller stole eight bases and Vandalia scored in eight of nine innings to beat Salem, 20-17, marking the second time this summer that the teams have both scored more than 10 runs in the same game.

Bray launched his first home run of the summer, and added three doubles and a single. His previous high for total bases this season was four.

Austin Schwarm, Noah Powless and Ryan Miller also homered in the game – Vandalia’s 10th straight win – and Post 95 has hit 14 longballs this summer. Bray, Powless and Schwarm were each a triple short of the cycle.

Mueller, who was leading the team in steals with 13, added eight more to his total, while also collecting four hits for the second time this season and scoring four runs.

It was his final game of the season, as he will miss the District Tournament due to basic training.

Quinn Wadkins also had his first four-hit game of the season, scoring twice and driving home a run for the fifth straight game.

Vandalia and Salem played to a 16-12 score in the second game of a doubleheader on July 1. 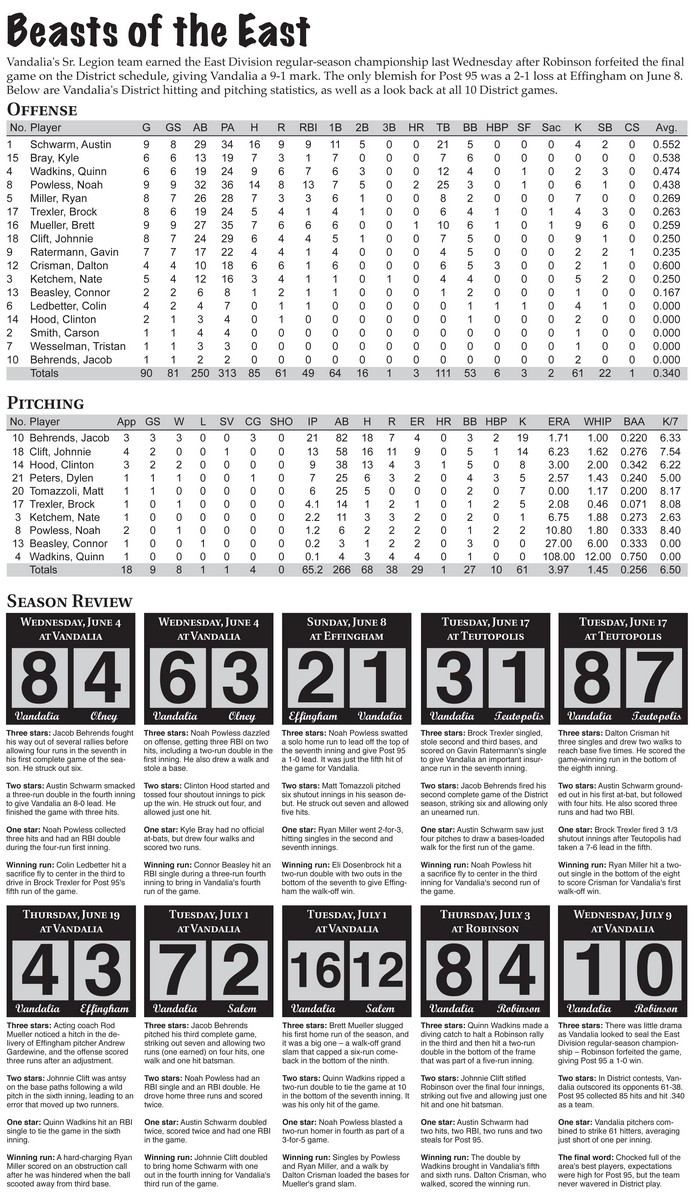