One of the often-mentioned, favorite memories of the Fayette County Fair is the fish sandwich stand.

While many recall enjoying those fish sandwiches when going to the fair with their parents, few, if any, can remember when the fish stand first became a part of the fair.
Some years ago, a lifetime resident of the area recalled that the first Fayette County Fair was actually held at the northeast corner of U.S. Route 40 and College Street, which was then a grassy area.
She remembered that families took quilts to spread on the grass to eat a picnic lunch, brought from home.
She also shared the memory of when the ladies of the area, including her mother, began serving a hot lunch on the grounds.
Like her, many people who shared those earliest memories have passed on and, regrettably, many of the precious memories they shared are now lost, as well of some of details about the fair attractions and activities of those earlier days of a simpler life.
However, the Fayette County Fair fish sandwich stand has survived many years, thanks to those who have worked to keep the tradition going.
A memory shared years ago indicated that one man began with a simple little fish sandwich stand in the early days of the Fayette County Fair, and as time progressed, others stepped in, resulting in today’s building, which is larger and more modern, near the grandstand entrance, adjoining the large pavilion with plenty of seating.
The Knights of Columbus Council #4630 (with members from from Vandalia, St. Elmo, Ramsey, Altamont and Brownstown) are doing a great job of continuing the tradition, and the sandwiches are still delicious, in generous servings.
Operating the stand through fair week requires a lot of commitment and manpower. Six men work in the stand each night for seven nights.
Some of them have been in it for 35 years. This week, three generations of the Springman family are working in the stand.
A Little Bit of History
Mike Mars, who is working in the stand this week, shared some of the history.
“About 35 years ago, in the 1970s, we (Knights of Columbus) started (with the stand) and sold fish, hot dogs and soda, and shared the ice concession,” he said.
“Brownstown VFW had it and started the first stand, then decided to give it up. Bill Earth, who lived in Brownstown, knew about it and took over the stand for the Knights of Columbus, and we’ve been here ever since.
“We’ve added hamburgers and French fries to the menu. We’ve had chips and candy over the years, but our main focus is still the fish sandwich,” Mars said.
Summing Up
As one person, who has enjoyed, and appreciated, the fish sandwiches for at least 75  (and maybe more) years, can testify, the sandwiches are just as delicious as remembered  “way back then,”  and still anticipated every year as Fayette County Fair time rolls around.
So, thus far this year, a fish sandwich has been enjoyed every evening since the fair began, keeping the tradition alive. 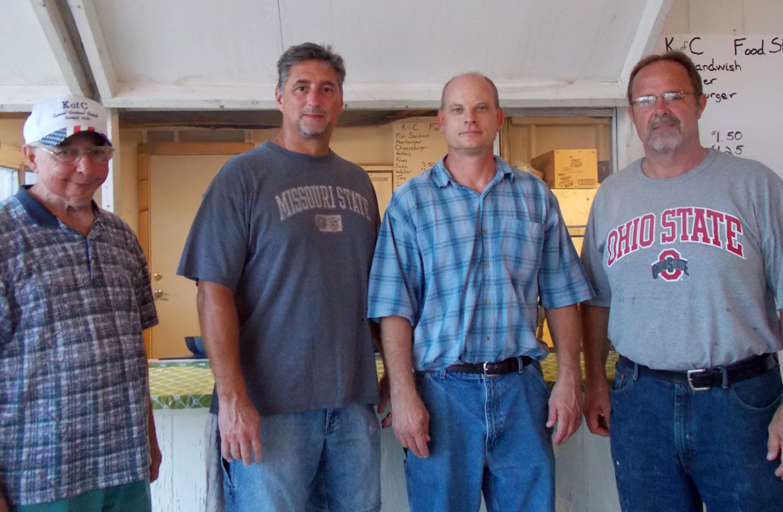