At its meeting last week, the Kaskaskia College Board of Trustees approved the retirement next year of the college’s president, Dr. James Underwood.

Underwood’s retirement is effective June 30, 2015, and upon his retirement, he will have completed 45 years as a community college educator, past 14 as the president of Kaskaskia College.
The board also approved bestowing upon Underwood the title of “president emeritus” upon his retirement.
Underwood has been instrumental in building the image of Kaskaskia over the past 13 years, and under his leadership the College established education centers in Vandalia, Salem, Greenville, Trenton and Nashville.
Additionally, the college created an expanded evening program and a weekend college, as well as expanded online course offerings and degrees.
Underwood was also influential in the enrollment increase over the past 13 years, with 80 percent unduplicated head count and credit hours generated.
Enrollments have reached 12,500 and credit hours have reached 115,000.
This growth resulted in $2.5 million additional in revenue, which has been applied to new programs, new educational sites, new faculty and staff, and advances in technology, and brought financial stability to the institution.
Under Underwood’s leadership, the college replaced the temporary buildings on the main campus, and acquired $8 million in state appropriations and nearly $3 million in private funds to construct the Health and Professional Careers Building.
The KC Workforce Center was also established in downtown Centralia. This facility now houses the College’s Adult Education Programs, Small Business Development Center and Dislocated Worker Program.
Also under Underwood’s tutelage, accreditation approval was gained through the Higher Learning Commission (HLC) for offering degrees at all education centers and offering online degrees, and the institution’s accreditation was reaffirmed.
Underwood has also been instrumental in many capital projects in his tenure at Kaskaskia College, including a capital campaign that raised $3 million for the new branch campus in Vandalia; and new centers in Salem, Greenville and Trenton.
A new nursing facility is now under construction on the main campus, the Crisp Center is undergoing renovations, and the college has a capital campaign in Nashville for a new center.
Other highlights include the Lifelong Learning Center, Fitness Center, Sports and Wellness Complex, art gallery and clock tower, and the transfer of the former Animal Disease Lab for the KC Agriculture Education Center. 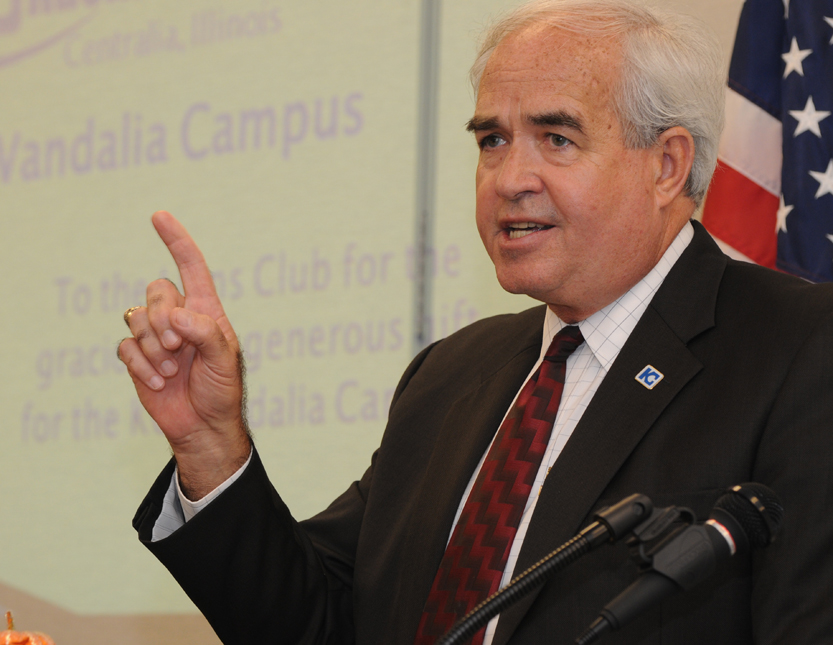 Dr. James Underwood, shown speaking at a community meeting at the KC Vandalia Campus, will retire next year.