VANDALIA – Jacob Behrends remained perfect with another complete game, Noah Powless drove in three runs and Post 95 rebounded from its first back-to-back losses with a 7-2 win against Salem in Sr. Legion District play.

Behrends fired his second straight complete game, striking out seven to earn his third win in District action and move his overall record to 6-0.

“He’s been throwing strikes like crazy,” said outfielder Austin Schwarm. “A big part of his success is that he doesn’t walk many people.”

Behrends walked one against Salem, and has walked just eight in 36 innings this summer.

He has 38 strikeouts, twice as many as any of his teammates.

“He’s been Mr. Reliable,” said acting coach Rod Mueller. “He gets up there and cruises.”

Schwarm led off the fourth with a double, and Powless smacked the next pitch for an RBI double in the break a 1-1 tie. He scored when Johnnie Clift doubled later in the inning.

In the fifth, Gavin Ratermann walked to lead off the inning, and Quinn Wadkins followed with a single.

Schwarm roped an RBI double that hit off of the fence in the left-field corner, and Powless delivered a two-run single two pitches later. He scored on a passed ball.

Schwarm has scored in his past 10 games, and gave all of the credit to his teammates.

“I’ve led off a lot of the year, so when I get on base in front of the big bats, that’s an opportunity for RBIs,” Schwarm said. “They’ve come through and hit me in.”

“Whenever he gets up in the count, he pulls back to make contact, and sometimes, he makes big contact,” Mueller said. “Then, he’s quick on the bases, and he takes full advantage.”

Salem took an early lead, scoring an unearned run in the top of the first inning before Behrends retired the next nine batters.

Vandalia led off the bottom of the first with two singles, but a double play and strikeout ended the inning without any runs. Brett Mueller reached on an error in the second, and scored on a balk after stealing second and third bases.

“We knew this was a District game, and we really wanted to take it to them after losing the last two,” Schwarm said. “We wanted to go out hot and get it done with.”

Hall recorded a hit, while Ross walked. Ross was the losing pitcher, striking out five in 4+ innings. Smith struck out two batters in an inning of relief.

Vandalia (19-7, 7-1 D) has two District games remaining, makeup games against Robinson, the first of which will be played on Thursday at the Robinson Tournament.

That is Vandalia’s second game of the night on Thursday, with a 6 p.m. game against Teutopolis coming before the 8 p.m. tilt with Robinson. A win against Robinson gives Post 95 at least a share of the District title.

On Friday, Vandalia faces a team from Tennessee at noon, and then takes on Green County at 5 p.m.

Results of pool play will set the seeds for a single-elimination tournament that begins at 9 a.m. on Saturday.

Added coach Mueller, “Those are (mostly) teams we haven’t seen, so we’ll have to get up there and adjust.” 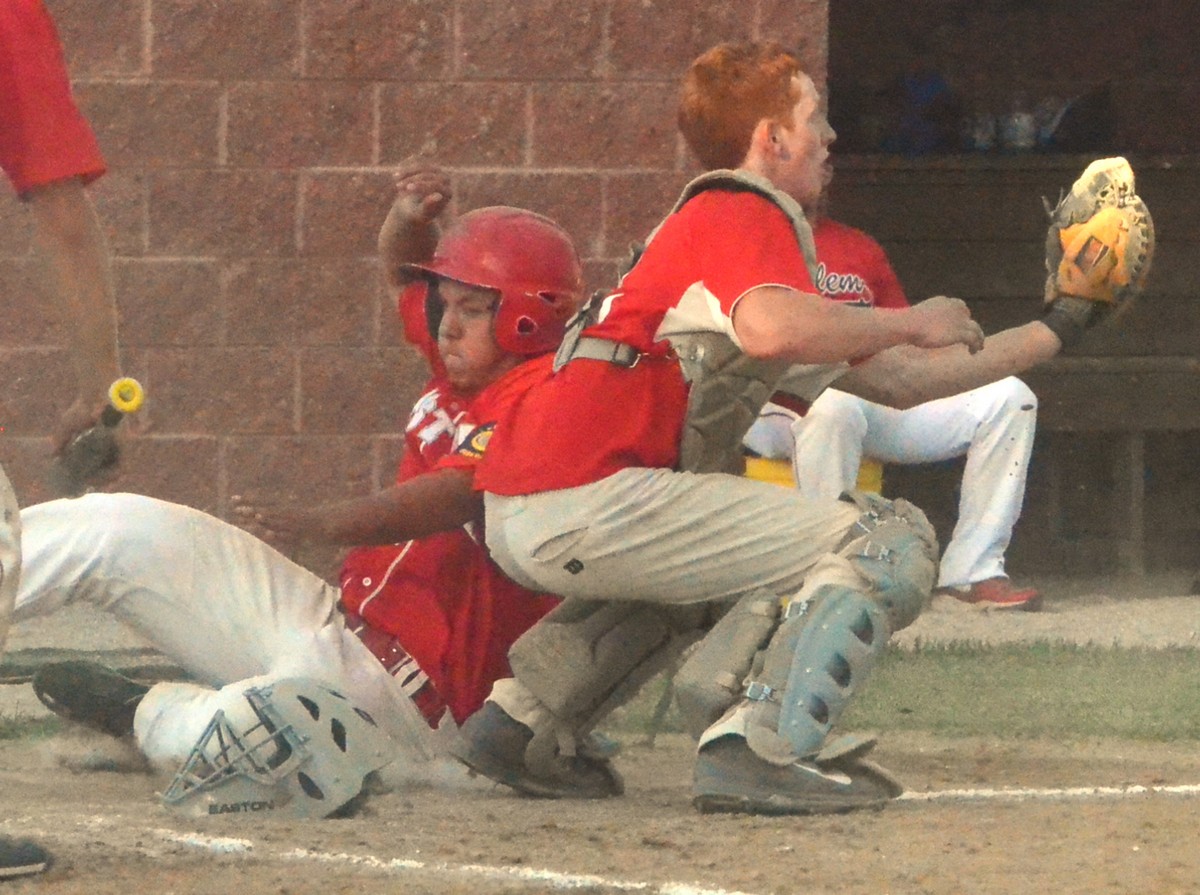 Vandalia’s Austin Schwarm scores a run on Tuesday in a win against Salem, giving him a run in each of his past 10 games.